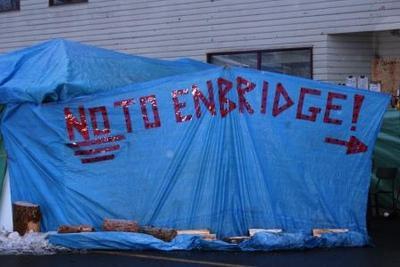 Enbridge opposition is clear in northern BC communities like Kitimat, Terrace and Hazelton. Photo courtesy of Kitimat Daily Online.

All eyes are on the small coastal community of Kitimat, British Columbia this week with hearings set to begin tomorrow regarding Enbridge’s controversial Northern Gateway pipeline from the tar sands through northern BC.

The Vancouver Observer has been following the issue closely, but other local sources can be a valuable tool to get a better sense of what’s happening on the ground in the communities most affected.

The Kitimat Daily Online is a local publication that has been on top of the issue since the beginning. The resource is linked to other northern publications like the Terrace Daily, and some of the content is shared. Kitimat Daily’s “Everything Enbridge” section is updated periodically with news about the pipeline project, community opposition, related events and First Nations participation.

David is attempting to tell the world about Goliath

In response to ongoing criticism around funding to environmental groups, this piece lists a number of foreign interests and non-Canadian companies involved in oil sands development. The article also links to other blogs and forums publishing commentary about the pipeline.

Written by First Nations conservation leader and Haisla elder Gerald Amos, this op-ed is a response to what he calls an “insulting” insinuation that northern communities and First Nations can be bought by foreign interests and US-based funders. It gives some valuable background to the Haisla Nation’s decades-old struggle to protect their lands and waters.

The Gitxsan Nation may have had a break from media coverage here in the south, but in northern publications like the Kitimat and Terrace Daily, their struggle for unity against the pipeline has been a major regional story. Photos and updated information reveals a strong movement to counter controversial negotiations previously made between Enbridge and the Gitxsan Treaty Society.