BC pension fund invests in companies contributing to climate change 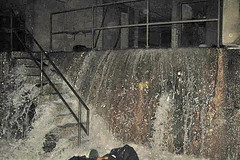 Flooding of the Long Island Railroad train yard in photo above.

British Columbia Investment Management Corporation’s (bcIMC) prides itself on its support for principles of responsible investment and, as signatory to the United Nations Environmental Programme’s Declaration on Climate Change, appears particularly concerned about climate change.

The UN declaration states that, without immediate action, climate change will cause extreme weather events, drought, crop failure and disease, and that these impacts will fall most harshly on the world’s poor. In accordance with these goals, bcIMC has called on federal Environment Minister Peter Kent to institute a carbon tax.

bcIMC holds stock in at least eighteen of the oil sands’ major players, including Sinopec (“the Khomenist regime’s lifeline to a nuclear bomb” according to Terry Glavin in the National Post) and ExxonMobil (a major funder of climate denier groups).

bcIMC’s coal holdings include stocks in coal companies such as Arch Coal and China Coal Energy, two of the world’s top coal producers. Coal has the highest greenhouse gas emissions per unit of energy of all fossil fuels and there is enough economically available coal to trigger run away climate change.

bcIMC also invests in coal terminals, such as Jimmy Pattison’s Westshore Terminals, which shipped 27.3 million tons of coal in 2011, enough to create the same amount of carbon dioxide that BC gives off in burning all its fossil fuels combined. As the US divests from coal, terminals that can ship coal to Asia are seen a necessary link to Asian markets. Thanks to coal terminals, coal companies get the profits they need, Asia burns one of the world’s most climate disrupting fuels, and Northwest residents get toxic dust. As a matter of conscience, Nobel Prize laureate and SFU Economics Professor Mark Jaccard and 12 others blocked a train headed for this terminal last May.

bcIMC owns many natural gas company stocks, including companies such as AGL and Apache that use fracking. Hydraulic fracturing injects millions of litres of water and thousands of liters of unidentified chemicals underground at high pressure to release natural gas from shale rock formations. The Council of Canadians opposes it because of its high water use, its high carbon emissions, its impacts on human health, the disruption to wildlife and the danger it poses to ground water and local drinking water.