"It's Our Future!": Vancouver youth rally to demand that Port of Metro Vancouver say "NO" to coal exports

Several students made eloquent pleas to the Port of Metro Vancouver: don't destroy our future!

About 60 youth, mostly high students, gathered at the Port of Metro Vancouver offices at Canada Place to ask the Port to reconsider its decision to expand coal exports out of Vancouver by 14 million tonnes. They held hand painted signs with slogans such as “Coal Kills” and “It’s Our Future.”  Three students gave speeches stating the case that the Port’s decision will have devastating consequences for their future. Here’s Sam Harrison’s speech, some of it call and response:

The federal government says the Port’s mandate is to “act with broad public support in the best interest of Canadians.” The federal government, the body in charge of our exports and harbours, can consider whatever they like when reviewing thing like this. They have delegated that decision making authority to those on the other side of these walls.

We’re the ones who are inheriting the risk from this. Is it in our best interest?

It’s our Canada, It’s our future.

Port Metro Vancouver is the entity that reviewed and approved this project. They could have said no. It’s as simple as that. They have repeatedly ignored concerns from community members, the mayor of the city, the BC lung association, and from leaders all over fighting for action on climate change.  Sure, they aren’t required by law to consider climate change in this review, but they also aren’t prevented from it. They have the authority to consider climate change and they chose not to use it. 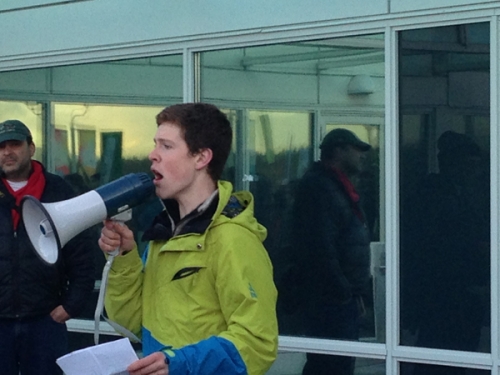 This means one of two things: they went out of their way not to consider it, or they did consider it and just don’t care.

If you go inside that door and walk down the hall, there is a wall detailing the port’s commitment to sustainability.

They boast about powering ships docked in the port with clean hydroelectricity, and how that will reduce greenhouse gas emissions. It’s just hypocritical to take credit for filling a coal ship using clean energy. In the big picture, it doesn’t matter if the lights in five offices on the other side of these windows are energy efficient if the decisions made in those offices are approving project that will lead to emissions greater than the yearly emissions of 99 entire countries.

On those walls, there is quote saying “we are working towards the significant reduction of Port-Related contributions to climate change.” That’s just a lie. They have made a decision that will increase global greenhouse gas emissions by 13 million tonnes and they’re considering a proposal that will add another 16 million tonnes.  It doesn’t get more “port-related” than that and it’s sure NOT reducing the Port’s contributions to climate change!

That’s not the kind of economy we want. It’s our economy, it’s our Canada, and it’s our future.

I’m tired of the excuses, the Port saying “it’s not our jurisdiction.” It’s happening on their land and they were the ones who reviewed whether it was in our best interest. That sounds like jurisdiction to me. They don’t lack the authority. They lack the courage.

I’m tired of them saying “it’s just our job to engage in trade,” sure, but their job isn’t to roll over to the wants of coal corporations. It’s their job to stand up for the interests of Canadians -present and future ones. Approving these expansions and continuing to build economy based on the export of carbon dioxide emitting fossil fuels is a fundamental betrayal of our generation.