A day at the Beach with Falstaff and Henry V 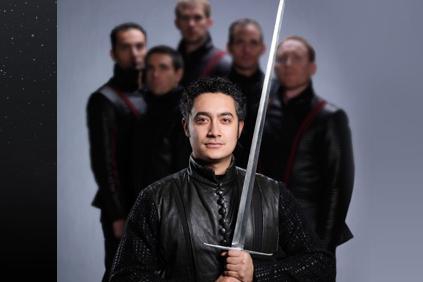 Falstaff hit the tents of Bard with resounding force. That may have had to do with actor/director Dean Paul Gibson in the sizeable role of the roguish knight. An enormous part for an enormous talent.

Alessandro Juliani took on the role of young Henry V and Kevin McNutty as is father, Henry IV.

Bob Fraser stood out as Hotspur, the son of the Earl of Northumberland and the chief opposition to Henry IV. His presence on stage was immediate and strong, stealing scene after scene.

Choreographer Treena Strubel's fight scenes were unique and interesting. A mix of swordplay interspersed with red-headed women with long red robes and tall narrow flags moving rhythmically throughout; both haunting and beautiful.

What intrigued me the most though, was the last scene between Henry IV and young Henry V and the intensity of the emotions it drew from the crowd. Without giving it away; it was a very touching scene where the two men embrace, and if you could feel the pulse of the audience at that moment, it would have shown that their hearts had moved to their throats.

As you moved around the room you would also have noticed that it wasn't the women who were responding this way, though they were indeed held in rapture; it was the men.
Hands were held in front of their mouths as the scene intensified, and as it wound to a close their bodies curled and folded and the hands moved, in large masculine swipes, to the corners of their eyes; It was beautiful.

Director Glynis Leyshon did a fabulous job with Errol Durbach's exciting adaptation of Henry IV, parts I and II.

In Henry V, Alessandro Juliani took on the lead role, again proving his range: one minute a merciless king, the next minute a playful lover.

Bernard Cuffling was lovely as the adorably red- nosed Bardolph. The most shocking development in the play had to be when Henry executed him for looting.

Bob Fraser stole the show again whenever he got on stage. There's just no denying his presence.

Henry V is filled with battle scenes, deaths, and executions, but surprisingly there's also a good share of humour.
Kevin K. James was hilarious as king Henry's friend Pistol from his Falstaff days; a real pleasure to watch: truly funny. And the English scene between Princess Katherine (Amber Lewis) and her gentlewoman Alice (Kayla Deorksen) was priceless.

The battles scenes were a lot harder to choreograph for this play as all the performers had duel roles in both armies, but the play had a sense of fluidity to it that captivated you from beginning to end: director Meg Roe did an amazing job once again.

Bard on the Beach runs until September 25, 2010 and this is the year to see it!!
tickets