It’s Sunday afternoon. Even the cherry blossoms and daffodils won’t stop the rain in Vancouver. Deep in thought, I head through the drizzle towards Horseshoe Bay on the express bus, oblivious to those around me.

"Excuse me," a man in an orange windbreaker beside me says, interrupting my thoughts. "Can I use the bus ticket for the SkyTrain as well?"

I turn towards the man, seeing him for the first time. He smiles. I explain to him how the transit tickets work. I point out Coal Harbour and the Westin Bayshore Hotel. As the bus crosses the Lions Gate Bridge, I point out North Vancouver to the right, and West Vancouver to the left.

I don't mind helping tourists navigate the city. I’m used to it. I too was a tourist many moons ago.

I recommend a few of my favorite restaurants and shops, and he silently takes note. It’s a typical tourist conversation, until the man explains where he is going, and why.

"I've been travelling since early morning from the U.S. I'm going to a special five-day retreat on Bowen Island. I need to figure out the meaning of life," he says in slightly hesitant, broken English. He seems embarrassed, smiling and shrugging simultaneously.

"A few of my friends have died and it has made me reflect over my life,” he adds. “They were all younger than me. It was such a shock. It really woke me up and made me wonder what I'm doing with my life."

His sincerity takes me by surprise, and I pause. He looks so professional. I wouldn't have expected him to be in the midst of a soul-searching journey. I had assumed he was a businessman, but now I look more closely. He is holding a large backpack in his lap. He seems a bit lost, but also emanates a quiet determination.

He tells me he is planning to move to Hawaii in the next couple of years. There are some important classes he wants to take. He wants to explore the purpose of life further, and to help others along the way. He wants to do it before it's too late.

We shake hands as I get off the bus at the Park Royal Mall.  He gives me one last smile, and tells me what a pleasure our conversation was. I wish him good luck.

More in How Civilized 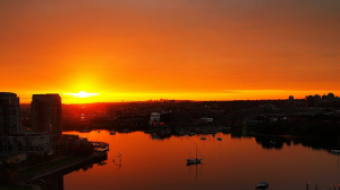 Lessons learned from my life's journey through 2011

Carina Clark reflects on a year of friendship and family with appreciation for the past and optimism for the future.
Carina ClarkJan 3rd, 2012
Speak up about this article on Facebook or Twitter. Do this by liking Vancouver Observer on Facebook or following us @Vanobserver on Twitter. We'd love to hear from you.