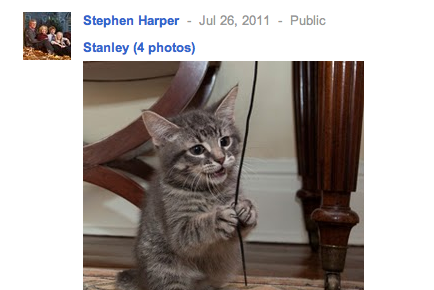 Stephen Harper (and Stanley) are on Google Plus. Should you be?

Over the past few weeks I've been trying out Google Plus (G+), the search engine giant's latest attempt at social media. Google Plus launched on June 28, and already has close to 20 million users. Not bad considering you need an invitation from an existing user to subscribe to the service.

My preliminary verdict is that, after a couple of less-than-successful efforts (Wave, Buzz), Google has finally got it right.

I'm not quite ready to give up on Facebook (at least, not until Lexulous links in to G+), but I find I'm going to G+ more than I do to Facebook, and almost as much as I go to Twitter.

It's easy to say what G+ is not. It's not Twitter, it's not Facebook, it's not Flickr or Youtube. But it combines aspects of all of those other social media services. And it does it reasonably well. Its privacy policy is prominent and expressed in clear language, and it’s easy to select what you share and what you keep private, unlike Facebook, where privacy and sharing options are sometimes difficult to find, difficult to interpret and difficult to customize. 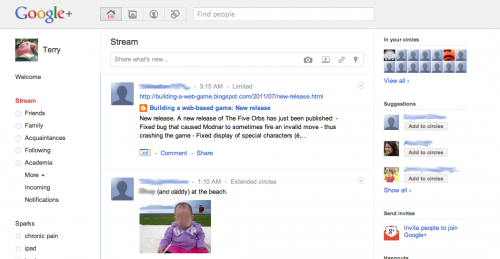 Google itself characterizes G+ as “real-life sharing, rethought for the web.” It works through Circles. For example, you can have separate circles for friends, family, acquaintances, work or school colleagues, fellow hobbyists, etc. You can make the gradations even finer -- close friends, drinking buddies, nodding acquaintances; colleagues, superiors, underlings. You can be as candid as you want -- dubious acquaintances, annoying in-laws, pretentious bores. You can put people (easily -- click and drag) into more than one circle. And don’t worry -- your weird cousin Bart will only know that he’s in one of your circles, not that he’s in the “psychopathic relatives” circle. It’s a more accurate way to arrange online relationships than Facebook’s one-size-fits-all “Friends”.

Once you’ve arranged your circles (and it’s easy to waste hours fine-tuning them), if you want to share a thought, a link, a video or whatever, you just select the circles you want to see that particular item. So if you want to brag about how drunk you were last night, you can just share it with your “close friends” circle and not worry about your mother or boss seeing it. (For extra protection, you can even select an option to disallow sharing of your post -- that way, the people to whom you send that potentially embarrassing item can’t forward it on.) A nice extra touch is that you can opt to disallow the sharing after you've posted the item.

You can share items (or "streams", as Google calls them) with several circles. If you’ve found a funny cat video, you can share it with your “cat lovers” circle and “acquaintances” circle. If you want to rant about Stephen Harper, you can share it with “close friends” or all your circles or “public”, depending on how indignant you feel about the prime minister. (Harper's on Google Plus himself, by the way, so you can include him in the share list.) 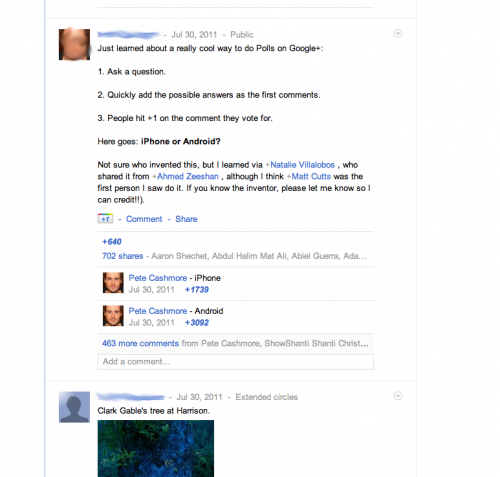 There’s even an option to share with “Extended Circles”, which means the post will go to all the circles of the people in your circle. Google Plus remembers your most recent sharing options and fills it in by default, so make sure you’ve selected the right circles before posting.

Another difference from Facebook is that circles can be asymmetrical -- just because I put you in one of my circles doesn’t mean you have to put me in one of yours. In this way it resembles Twitter where you can (usually) follow anyone you want without them being obliged to return the favour. And like Twitter this means that celebrities, internet pundits and politicians are in lots of G+ users’ circles, but not vice versa. For example, Mashable founder Pete Cashmore is in the circles of 132,000 G+ users (including me), but only has 139 people in his own circles.

Besides Circles, G+ features include Sparks (topics of interest that you want to follow), Hangouts (where you can engage in group discussions via webcam) Chat and +1 (similar to Facebook’s “Like”).

Of course, Google isn’t investing millions of dollars into Google Plus out of the goodness of their hearts. They’re in an intense battle with Facebook for control of the social media universe and the ads that make social network sites so profitable. All those G+ posts, videos, photos, links and chats also help Google hone its search algorithms. They also help Google deliver a more complete picture of you and your interests to advertisers. And finally, don’t forget that Google Plus data is stored in the United States, so is subject to the U.S. Patriot Act.

Those caveats aside, I find G+ to be a useful way to keep in touch with friends, family, and colleagues and to keep abreast of the latest developments in areas that I’m interested in. Its privacy options are reasonably transparent and easy to tweak.

The question is though, whether G+ will be able to build enough momentum to become a reasonable social media alternative to Twitter and Facebook, or whether it will fade away as the novelty wears off and people go back to the more established social networks. People have invested a lot of time and effort into establishing and maintaining their networks of friends and followers on Twitter and Facebook -- will they be willing to make the effort to do so with a third service? It’s too early to say, but Google at least has a fighting chance with G+.

For more information about Google Plus (and to be notified when it becomes publicly available), visit plus.google.com. For a good look at the Google-Facebook rivalry, check out Jemima Kiss's piece in the Guardian here. Nicholas Carr, author of The Shallows, also has an excellent analysis of Google Plus on his Rough Type blog.