Casualties of War, Mexican Drug Dealers and Rampaging Zombies and a Religious Film for Teens are New in Theatres 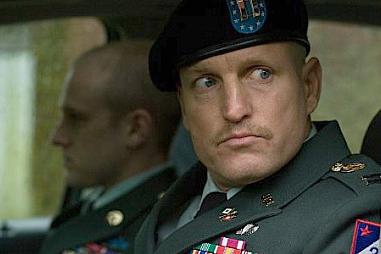 War’s other collateral damage brings out Woody Harrelson’s acting chops. He’s even nominated for an Academy Award. Bruce Willis teams up with Kevin Smith in a cop story and some George A. Romero almost-zombies are brought back to life. They’re your top new movie choices this week.

THE MESSENGER
Every so often we get a film that is difficult to watch but is so honest about real issues and people that it’s entirely satisfying. Last year’s Hunger and Precious for example, and now this examination of war as seen from a rare angle. Forget glory and even duty; remember that soldiers die and that’s devastating to their loved ones back home. Ben Foster plays a decorated American G.I. assigned to deliver the news to some of them. He’s teamed up with an old-hand (Woody Harrelson) who shows him how it’s done. Don’t linger, he counsels, and don’t try to comfort anyone. “Never touch the NOKs (next of kin).” We see them make six of these visits, all chilling, all with a mood of heightened reality. Gradually an anti-war message builds although it is not spoken directly. The talk is about the images of war, heroism and procedure. Foster’s character rails against the callous nature of their work, especially after he starts breaking a major rule. He makes extra visits to a young widow (Samantha Morton). Every actor is perfect here and Harrelson has an Oscar nomination. The sharp and lean script is also nominated. The film is American but just as relevant to us as we suffer more losses in Afghanistan.
(Tinseltown) 4 out of 5

COP OUT
Maybe if the plot made more sense and more of the jokes paid off this one might be worth your while. As it is, it merely shows Kevin Smith out of his element with a buddy-cop action film. He made his name directing small slacker comedies - Clerks was first – and grew a cult following even when the subsequent films were inconsistent. Now he’s working with a script he did not write and which he makes only sporadically funny, generally loud and frantic and typically foul-mouthed.

Bruce Willis and Tracy Morgan (of Saturday Night Live fame) are trying to take down a Mexican drug gang in Brooklyn. The leader has ambitious expansion plans. Or he had. They’re on a flash drive hidden in a crucifix and currently missing. Also his new Mercedes is stolen. He does have a rare baseball card stolen from Willis, who needs it back to pay for his daughter’s wedding. They make a deal to help each other. It sounds clear enough. On screen it’s often confusing, cluttered with extraneous sub-plots and overly reliant on facile references (here slyly dubbed “homages”) to many cop movies that came before. One of them elevated Eddy Murphy from SNL comic to big star. Morgan is unlikely to get the same boost. The film is uninspired, he’s often unintelligible and Willis doesn’t seem to be trying very hard.
(Tinseltown, Oakridge and 13 other area theatres) 2 out of 5

THE CRAZIES
They’re not zombies, but they’re pretty disgusting. All protruding eyes, mottled skin and veins pulsing. They’re the residents of a small American town turned into rampaging monsters by something in the water. Since the film tries to hold the explanation a mystery for a long time, I’ll just say it involves the military, somewhat like in that terrific Korean film, The Host.

This is a remake of a 1973 George A. Romero film with more gore and modern special effects. Apparently the action is late-starting but then non-stop. Timothy Olyphant plays a small town sheriff and Radha Mitchell plays his wife.
(Tinseltown, Rio, and 12 other area theatres)

TO SAVE A LIFE
Christian films are a whole genre in themselves. They do well in the states and rarely come here. This one is opening right across Canada with reputedly a fairly subtle religious message—at first. It’s aimed at teens and includes issues like pregnancy, abortion, peer pressure and suicide. They’re raised through the story of a high school athlete (Randy Wayne) who’s best friend’s suicide forces him to reconsider what’s really important in life.

The script is by a youth pastor who says he based the characters and their problems on real teens he has encountered in his work. A review in Variety complains that after starting as a thoughtful portrait of a young man’s spiritual crisis, the film devolves into a church message tract.
(Tinseltown, Riverport and Cineplex Theatres in Langley and Coquitlam)