Iron Man 2, the expected blockbuster, opens along with a cheeky look at street art and a major documentary festival 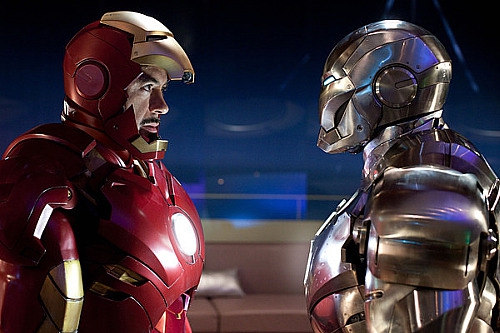 Robert Downey Jr. plays a witty Iron Man 2 in the sequel to his mammoth hit of two years ago. It’s looking to be even bigger but is it as good? Please Give asks the question “Can you live well when others are poor?”  while a single documentary, Exit Through the Gift Shop, and a whole festival, take other readings on reality.

IRON MAN 2: At the end of #1, Robert Downey Jr., as arms manufacturer Tony Stark, said publicly that he is Iron Man. Issue #2 starts with the same scene on TV and Mickey Rourke watching and seething in Moscow. He wants revenge for the wrongs done to his scientist father. What a good, economical way to carry over the story into this sequel. Now, if only the whole film had been as efficiently plotted. It could have been just as good as the first. Instead, it gets wobbly. It keeps Rourke off screen much of the way, brings in too many other characters, villains and otherwise, and slows down in the middle with a lot of talk that only people familiar with the source Marvel comic books will appreciate. (There’s a substantial scene tacked on especially for the fanboys at the end of the closing credits).

What made #1 a special hit was the snappy, witty dialogue delivered by Downey Jr. He’s terrific again notably in a wonderful scene before a senate committee as Stark jousts with the chair (Gary Shandling) and a rival (Sam Rockwell) over his high-tech suit of armor. At the office, he and Gwyneth Paltrow, banter like stars of a 30s screwball comedy. He even admits to being a narcissist, quite a change from the first film where he was driven by his conscience. Scarlett Johansson, though, despite the hype, brings only visual embellishment and one derivative action scene. Speaking of action, it comes in three large set pieces, two standard and forgettable, and one, when Rourke attacks Downey on the Monaco Gran Prix race course, exciting. The film is enjoyable but not as good as the first.
(5th Avenue, Dunbar, Rio, Scotiabank and many other theatres). 3 out of 5

EXIT THROUGH THE GIFT SHOP: Could it be that “art is a bit of a joke?” Or is that question a tip off that this film is something of a send up? It’s what Banksy is left wondering at the end of this entertaining documentary. He’s the street artist from England who has managed to become highly successful, with gallery shows, books and stunts like placing a Guantanamo prisoner doll in Disneyland, all the while keeping his own identity secret. He appears with his face dark inside a hoodie and his voice slightly altered in this film which he made to illuminate the world of graffiti artists, who spray paint on walls and call it street art.

We see clips of many at work, supposedly filmed by an eccentric Los Angeles acolyte who became an artists himself. Adopting the name Mr. Brainwash, he attracted 4,000 people to his first show. Banksy says he’s perturbed but exactly who is conning who? Doesn’t matter. Enjoy the cheeky fun and the provocative ideas about fame and business among artists.
(The Ridge Theatre, Tinseltown) 3 ½ out of 5