The American, Going the Distance, Life During Wartime, Machete and two gems at the VanCity Theatre arrive 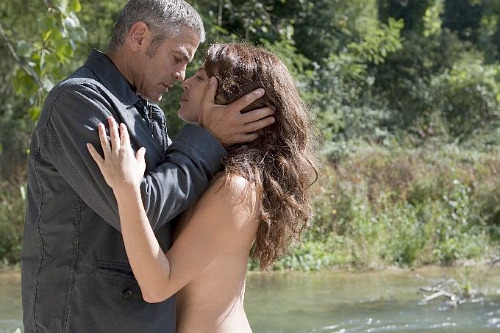 In his new film The American, George Clooney spends a lot of time with this young woman as he bides his time in Italy. In real life, he lives there. So why isn’t he happier? Drew Barrymore and Justin Long, meanwhile, try a long-distance love affair, a family tries to recover from scandal, a boy helps save civilization, a young couple takes up ballet and Latin America gets a good platform.

THE AMERICAN: It’s unusual for a George Clooney film to disappoint, so in that sense we have something different here. This one seems to have ambitions as an art film. It’s thoughtful, elusive and may have something on its mind. It just finds it difficult to get it across, then, after an intriguing opening, allows long stretches in which nothing much of any importance is going on and ultimately fails to entertain.

Clooney plays an assassin hiding out in Italy after a rough job in Sweden. We have no idea what it was about or what his new job, apparently his last, will be. So he waits in an ancient hillside town, while a local priest tries to chat him up. He’s not talking, though. He does frequent a knock-out beautiful and several-times-naked prostitute and seems to be falling in love with her. We know that won’t turn out well, because his boss warned him to avoid making friends. Soon another woman arrives (Thekla Reuten, who played the hotel owner in In Bruges).

She needs a special gun which he fashions for her. That gives us many scenes of gun craft (in a hotel room, no less). Meanwhile, some Swedes show up trying to kill him. You may be getting the impression we have a thriller here. Not so. There are periods of suspense, especially building up to a final skirmish, but they’re brief. Mostly, this is a moody character study, a limited one because Clooney’s hit man doesn’t say a lot and his facial and eye expressions, as good as they are, can only communicate so much. He even seems a bit detached in the love making scenes. Director Anton Corbijn made his name with photography and the film Control about a tragic rock star. His second film looks great but doesn’t play all that well.  (5th Avenue Cinemas, The Rio, Dolphin and several suburban theatres).  2 ½ out of 5

GOING THE DISTANCE: What do you get in a romantic comedy made by a documentary specialist? A pretty good dose of realism, dialogue that sounds authentic and in this case, quite a bit of improvisation. Nanette Burstein achieved the same feel of authenticity in her excellent real-life film American Teen.

This time it’s pure fiction she’s bringing us, with generous dollops of fantasy. Drew Barrymore and  Justin Long (familiar to us all from those Apple computer commercials) play a New York couple who meet playing an arcade game in a bar, grow their relationship but have to separate. He works in town for a record company; she goes off to grad school in San Francisco. They try to keep things going long distance, which works for a time, until she’s offered a newspaper job there. (A fantasy these days, but maybe it happens). So who will forfeit their work and come join the other? Drew and Justin, who’ve been a couple in real life too,  have a nice rapport in their roles and are comfortable with the jokes. Even, it seems, the randier bits about masturbation, phone sex and doing it in the dark on the dining room table. They and some pretty salty language are part of the film’s contemporary realism too. Charlie Day and Jason Sudeikis (as his pals) and Christina Applegate (as her sister) are also funny. This is a good nicely-modern romantic comedy. (Tinseltown, Dunbar, Oakridge and other theatres from here to Chilliwack)  3 ½ out of 5

THE SECRET OF KELLS: Here’s an animated film that will be far above the heads of most kids. Adults, though, will be charmed and even thrilled by it. First of all, there’s the art work, done the old way with actual hands doing the drawing. There are bright colorful scenes like this ….

And dark, scary scenes in the forest where wolves threaten and ultimately a huge, exciting attack by a horde of Vikings. The animation is stunning, especially on a big screen, and apparently incorporates some seamless computer work. At times, the film emulates the intricately decorated texts or illuminated manuscripts produced in the Abbey of Kells around 800 A.D. and now seen as Ireland’s greatest national treasure. The story tells of a young boy attracted to work on that book, his willingness to defy his uncle (voiced by Brendan Gleason) by going out into the wild forest in search of ink berries and the rescuing help he gets there from a fairy named Aisling. No less than the survival of civilization is at stake. The book has to be finished before the Viking assault. It’s a nice blend of fiction and historical fact, although the facts are not fully enough detailed for those of us not familiar with them. Still, it’s an outstanding film and an Academy Award nominee earlier this year in the feature-length animation category. (VanCity Theatre)   4 out of 5.