SILENT HOUSE: From the time that Sarah sits on a rock at a lake’s shore, gets up and walks to a large summer house where she meets her father and uncle who are fixing it up to prepare it for sale and seem to have a bit of a disagreement when they find a patch of mould and leave her alone in various dark rooms with only a lantern to help see because the power if off, and she hears clunking noises and dares to search both up in the attic and down in the basement and  sees a hazy figure pulling a body but is unable to get out because all doors are locked and windows are stuck shut although when she does get out, she is brought back in for more frights, we’ve been treated to a nicely tingling succession of scares and a gimmick.

The story has been filmed in one long run-on shot, like that previous sentence, with no edits. No apparent ones, anyway. 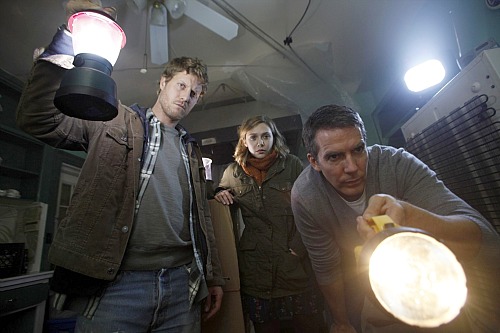 Directors Chris Kentis and Laura Lau have remade a film from Uruguay which also used that same technique. It was hardly necessary. We don’t even notice it, unless we’re looking for it. Smooth editing could have produced the same result and maybe trimmed out some excess.

But this is a pretty effective haunted-house thriller.  Elizabeth Olsen (sister of the Olsen twins) plays Sarah with a natural ease and four tense scenes in which she struggles to control her hysteria. Is it all in her mind or is it really happening? The story keeps you guessing but then comes to a confusing end. It’s supposed to be a surprise but feels so out of step with what has come before. (International Village and suburban theatres)  3 out of 5

FRIENDS WITH KIDS: Here’s a romantic comedy that strives to be different and offers up a clever premise but ends up much the same as the rest. Two long-time friends in New York (Adam Scott and Jennifer Westfeldt, who is also the writer and director) decide to have a baby without getting married or even living together. He’s a womanizer; she’s racing the biological clock. They’ve seen their friends (Maya Rudolph and Chris O'Dowd; Kristen Wiig and Jon Hamm) turn into squabbling couples when their kids came and are convinced they can do better. They share the childcare duties 50-50 but keep leading their own separate love lives. 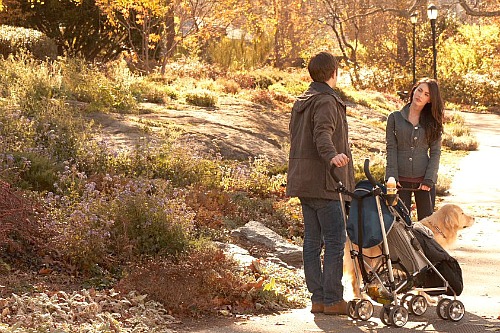 When he dates Megan Fox, who he describes as “a skinny flexible dancer with a big rack” and she lands a Mr. Big (Edward Burns), jealousy creeps in.

Acrimony and tears soon follow, and not just between them but the whole ensemble. It becomes less about what one character calls “babydom” or that unusual arrangement and more about marriage itself, highlighting much more of the failings than the successes though. The script offers witty dialogue, quite a few laughs and language that’s far more vulgar than you’d expect from middle-class urbanites like these. And there’s little that’s endearing about children. It’s a bit smug actually. (International Village and three suburban theatres)  2 ½  out of 5

GRANDMA’S BOY: Apparently thousands of people dropped by to snap a photo of an old movie poster/mural uncovered downtown recently by a wrecking crew. It was on the side of a building at Granville and Robson and promoted a one-week booking, in 1922, across the street at the old Capitol Theatre. The film had Harold Lloyd, one of the silents’ greatest comedians, playing a timid boy who has to deal with a bully. The New York Times called it “amusing nearly always and hilarious a good part of the time”. 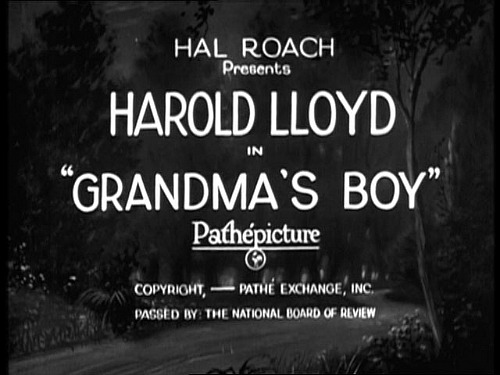 Good then, for Tom Charity over at the VanCity Theatre, to seize the opportunity, find the film and screen it. You can catch it Wed night at 7. The theatre is at Davie and Seymour.

A THOUSAND WORDS: Eddie Murphy didn’t do the Oscars this year but he’s trying to come back as a movie star. Tower Heist was his first lead role in a couple of years and now we get one that’s been on the shelf for four years. It was his follow-up to the widely detested Norbit, and had the same director, Brian Robbins, in charge. So, the prospects don’t seem bright but with no media previews locally it’s hard to be definite about that. Murphy plays a huckster who cheats a guru and is punished with a deadline. He can speak only 1,000 more words before he dies, which must be hard on a motor mouth like him.  (International Village and a few suburban theatres)

NOTE: Most of these images are movie stills supplied by the studios and are therefore the exclusive property of their copyright owners.