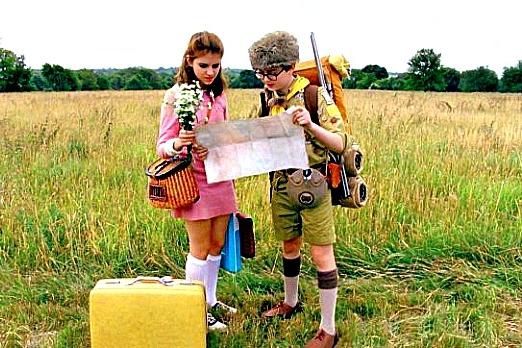 So many choices, so little time. Please also note two artful films further down: In the Family and This is Not a Film.

Snow White and the Huntsman: 2 ½

The Beginners Guide to Endings: --

MOONRISE KINGDOM: Some find Wes Anderson’s films too precious. I find the best of them, Rushmore and Fantastic Mr. Fox for instance, to be immensely entertaining. He’s at his clever and quirky best in this new one with a whimsical tale set in 1965 on an imaginary island off Rhode Island. It’s named New Penzance, probably an intentional reference to Gilbert and Sullivan. His characters and their actions are just as precisely mannered and absurd. He puts them into perfectly-framed, almost-storybook settings and puts on the record The Young People’s Guide to the Orchestra to entertain us. 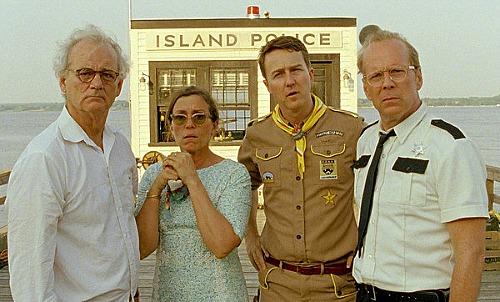 The main plot has two pre-teens running away together. They obviously can’t get far but his scout leader (Edward Norton) and her parents (Bill Murray, Frances McDormand) as well as the local police chief (Bruce Willis) are too ineffectual to find them fast. There are two complications. There’s a major storm on the way. And the cop is having an affair with the mother. That helps splinter the search effort. So, young love contrasts with old, although that’s hardly the main thrust of this film. The stylized, wryly funny, idiosyncrasies Anderson wrangles into a nearly surreal whole are enough to make this film a real pleasure. No deeper meaning needed. (The Park and International Village)  4 ½ out of 5

SNOW WHITE AND THE HUNTSMAN: So this is what you get when you spend $175 million to re-tell a well-known fairy tale: a big spectacle with battle scenes, great art direction and special effects but oddly a film that feels longer than it is. That’s partly that’s because director Rupert Sanders went for a heavy Shakespearean tragedy look and feel (as well as dollops of Lord of the Rings) but neglected the themes beneath. Also partly because Kristen Stewart is a less-than compelling heroine, even near the end when her Snow White takes on a Joan of Arc role. Much of the time, Stewart resorts to her specialty, sad-eyed moping. How the mirror could decide she’s the fairest in the land is beyond me. 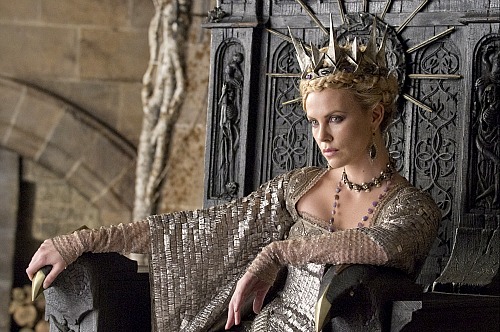 Charlize Theron, on the other hand, owns this film with her displays of vanity, imperiously barking out orders or shrieking displeasure. She has an early speech about how men use women until they no longer need them. That idea isn’t mentioned again, one of several story elements that meander, pop up unexplained or fizzle off. 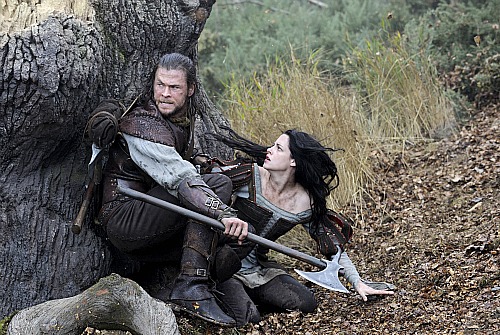 Chris Hemsworth brings Australian bravado to the role of the Huntsman, who becomes Snow White’s protector rather than killer. And the dwarves, eight of them, are played by full-size actors (Ian McShane, Toby Jones, Eddie Marsden, et al) reduced in size by visual effects. There are many excellent effects including a wonderful sequence in the forest as Snow White awakens to see fairies flitting about, looking exactly like the famous Cottingley fairies (at the bottom of the garden) almost 100 years ago. If only the film had as much magic throughout. (Scotiabank and many suburban theatres) 2 ½  out of 5

BERNIE: Goofy Jack Black teams up with one of my favorite filmmakers, Richard Linklater (Dazed and Confused, Me and Orson Welles, etc., etc.) and  we get to enjoy an entertaining black comedy with a quirky true story. Linklater calls it his Fargo and it does have a similar eccentric vibe.