VIFF picks for Monday and Tuesday

LAWRENCE & HOLLOMAN: This one, set in Vancouver, is not subtle at all. And its humor is often overdone and abrasive. But it also has plenty of stretches where it settles down and gives us a faceoff between two classic personality types. And coming as it does from a play by Morris Panych, although much opened up with new characters and settings, you know there’s an off-the-wall ending. 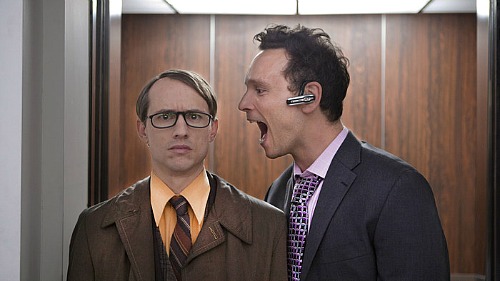 Daniel Arnold, who also helped adapt the script, plays Hollomon, one of those office nebbishes. Ben Cotton, as Lawrence, is that overbearing type who struts and boasts that he’s salesman of the month, two times in a row. He claims to have “acumen” and decides to coach Hollomon “to take more risks ... get on the train.” Some of it is clever, like the scene where he orders him to never again mention that his favorite color is periwinkle. Some of it is broad and clunky. There’s a lot of black humor as the bombastic Lawrence suffers payback. Mixed but mostly a hoot.  (Tues. and Oct. 9)

THE SPIRIT OF 45: I had always wondered why the English, after revering Churchill so much in wartime, elected him out right after. In this documentary, Ken Loach has the answer. As one man says, they were afraid England would return to the way it was before the war: “run by rich people, for rich people.” So, they elected Clement Atlee’s Labor government, and were well-rewarded. 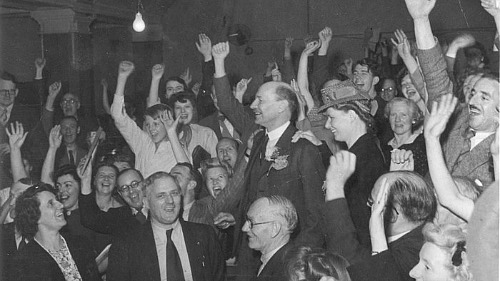 Labour nationalized the mines, the railroads, electricity and created the National Health system, the U.K.’s version of medicare. As Loach itemizes these and other accomplishments, I thought first of Obama’s grueling fight for health care and then of the looming spectre of Margaret Thatcher. Sure enough, there she comes in the 1970s and undoes pretty well everything Labour had done, except for National Health. Loach details all this history with stories by people who were there, with a great collection of film clips and a steadfast devotion to the spirit of 45. He ends off with a vigorous call to get back to it. This is a lively and passionate film. (Tues. and Oct. 8)

DESERT RUNNERS: An intense study in obsession. Or maybe just testing yourself by giving everything you’ve got. This documentary follows an attempt by a group of runners to do the hardest series of marathon runs on earth: across four deserts –the Gobi, Sahara, Chile’s Atacama and Antarctica – all in the same year. One is doing it to honor his wife who died of cancer. One will fail, initially, but come back succeed anyway. All will push themselves to ridiculous limits, running up to 100 kilometers in a single day in temperatures up to 102 degrees Fahrenheit. Some have to deal with blisters, dehydration, inability to keep food down. Excellent camera work takes us right along to see—and feel—it all. (Tues. and Thurs.)

MY PRAIRIE HOME: Chelsea McMullan’s is strangely affecting partly because the central character is eerie and a bit strange. Rae Spoon is an Alberta singer/songwriter who is also transgendered. 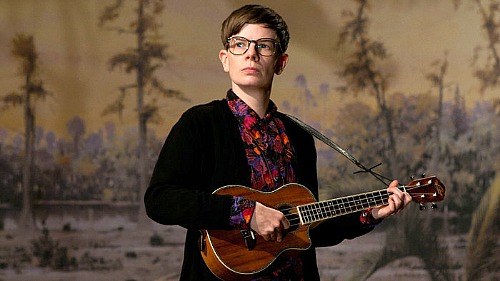 We first encounter her in a prairie café. She suddenly stands up with her guitar and sings an entire song in a plaintiff almost-wail. She’ll do that several times more in other locations and you’ll remember the plaintive tone of her voice and music long after. She also tells us her strict religious parents, how they and her friends rejected her, her sexual awakening and even her career.  Her songs are deftly placed among her musings and the whole film make excellent use of various typical prairie backgrounds. (Tues.)

LA MAISON DE LA RADIO: I worked in radio for years and I recognize everything in this documentary. It’s an absolutely accurate picture of what goes on. This version is in France’s national public radio service, which in every aspect seems an exact match for the CBC. As it was. CBC doesn’t do some of this. The French station still has a man whose head pokes up from behind a stack of CDs. “We’re still here with classical music,” he says. He hasn’t gone digital yet. There’s still a radio orchestra being recorded.

The film covers an entire 24-hour period. A producer coaches a reader to punch up his delivery. A story editor asks for “more bounce” in a report. News writers ponder sardines versus anchovies, wonder what to do with a Justin Bieber story and laugh over lines like “The man cut in two was killed by a bullet”. There’s more. A whole day’s worth and a very comprehensive look at what goes on in a place like that. (Mon. and Thurs.)