Local kid gets potty mouth in Good Boys, British teen is musically Blinded by the Light and a stunning history is uncovered

It comes from a popular novel by Maria Semple and is directed by Richard Linklater, who after his winner Boyhood has made three films about adult problems. This one looks at a woman’s eccentric life and reaction to being shut out of a career of creativity. How? We only learn late how it happened and spend most of the film watching the results. She lives in Seattle. Her husband (Billy Crudup) works for Microsoft; her daughter (bright newcomer Emma Nelson) is about to go away to college, and a neighbor (Kristin Wiig) is immensely irritating to her.  She likes to escape (“adjustment disorder,” her doctor calls it) and she does split for Antarctica when Russian hackers steal her identity and security officials get nosy. Improbable? Sure. But the result is encouraging about second chances. (International Village, Langley and Mission) 3 out of 5

AFTER THE WEDDING: 13 years ago it was an original film from Denmark. Now it’s an American remake with good intentions but not a great deal of vitality. The story evolves slowly, bit by bit and requires some patience to really appreciate. Also, there’s a complete gender switch from the original, in aid of differentiation at best. In itself it doesn’t add or detract. It just is.

An American woman played by Michelle Williams needs money to fund the orphanage she runs in India. She’s summoned to New York to meet with a potential donor, a high-powered media boss, played by Julianne Moore, who attaches strings to the offer and then invites her to her daughter’s wedding. Feeling out of her league at the luxurious estate where it’s held, she is cautiously gracious like a willing guest. But then she finds out a secret about the donor and meets her husband (Billy Crudup, in the second film he’s in this week) the story turns soap opera-ish. Interesting, I don’t remember that happening in the original. Not as strongly anyway. The acting is good though, notably by Abby Quinn as the young bride and not surprisingly by Julianne Moore. (Her husband Bart Freundlich directed the film). (International Village) 3 out of 5

THE ANGRY BIRDS MOVIE 2: That cell phone app by which you fling birds at egg-stealing pigs has inspired a second film and it’s better than the first, richer in both silliness and hipster humor. Not surprising really. I counted six current or former cast members from Saturday Night Live doing voices here, along with others like Peter Dinklage, Awkwafina, Nicky Minaj and Brooklynn Prince, who charmed us in The Florida Project. Oh and the children of Nicole Kidman, Gal Gadot and Viola Davis. But the big, flamboyant addition is Leslie Jones, as an angry eagle, embittered and jilted, looking for a warmer home than her chilly ice-covered island. 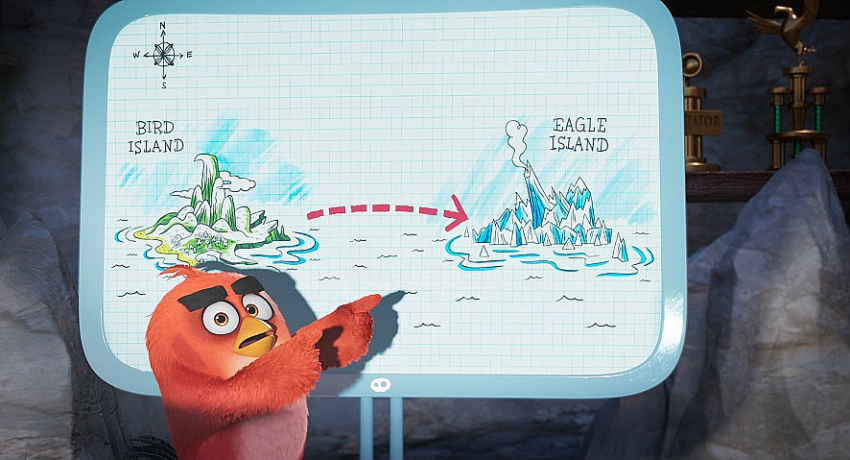 The birds, led by Red (Jason Sudeikis), their savior from the last film and the pigs, with their leader Leonard (Bill Hader) declare a truce in their on-going war to fight her off. They don’t have a plan but they do have a gadget guy, a brute and a smart scientist named Silver (Rachel Bloom) who they try to disregard because she’s a woman and what does she know about war? They’ll learn. There’s a parallel story now and then about three chicks protecting, losing and trying to reclaim three eggs before they’re destroyed. The film starts slow but as the funny bits increase becomes quite a hoot, though I wonder if younger kids will get many of the jokes. (International Village, Marine Gateway and many suburban theatres) (3 out of 5)

47 METERS DOWN: UNCAGED: Finally, a shark film. It looked like crocodiles would be it this summer. But two years after the original, here’s a sequel with the same 47 number, which means nothing this time,  and a clear indicating that this time there’s no cage. Unfortunately there’s also less sense. Four young women go scuba diving down into a sunken Mayan village that an explorer (John Corbett) has found even though he cautions that he saw a great white shark down there.

The women are daring and reckless though and there’s some name recognition among the actors: Brianne Tju, Corinne Foxx (Jamie’s daughter), Sistine Stallone (daughter of Sylvester) and Sophie Nélisse, who debuted in the superb Quebec film Monsieur Lazhar seven years ago. Two play squabbling stepsisters and all are terrorized in the claustrophobia of the narrow, underwater passageways by the sharks. When they come on, the scenes are so chaotic and confusing you can’t tell what’s going on. A neat attempt perhaps  to replicate the havoc that would surely be? I found it boring at the peak. A later sequence when one or two of them are trying to get to a tour boat cruising on the ocean nearby is far more tense because it’s open and clear and you’re striving with them.  (Scotiabank and suburban theatres) 2 ½ out of 5