The film shows three different stages in a young man’s life in a rough part of Miami. As a boy, played with few words by Alex Hibbert and nicknamed “Little”, he’s bullied at school because he’s “soft.” He’s rescued and mentored by an unusual father figure: his mom’s drug dealer. In highschool, played by Ashton Sanders and going by his real name, Chiron, he’s anxious about the attraction he feels for a friend. In part three, he’s known as Black. Trevante Rhodes plays him as a macho guy with street cred and a big car. The gay angle is only subtly there and not even referred to by that name. (A stronger word is used a couple of times). The film is about masculinity and how men perceive it as they grow up. We get the process through one man’s experience trying to understand what it requires of him. Gay or not, that’s universal. Barry Jenkins has made a superb and obviously very personal film. (5th Avenue) 5 out of 5

TROLLS: It’s been a year of good animated films and here’s another one. It’s not one of the artistic ones but it bounces with enthusiasm, good cheer and lots of color. It might correct the recent run of misfires at Dreamworks Animation. Ever since Shrek, their films have been wallowing in wisecrack pop culture references. Not here. The only thing close is the music. You’ll recognize tunes by Lionel Richie, Cyndi Lauper, Kool and the Gang, Simon and Garfunkle, even Tchaikovsky (uncredited) and Can’t Stop the Feeling, that infectious hit by Justin Timberlake. He’s one of the producers and also voices a gloomy Troll out of step with his eternally joyful community. “I don’t do happy,” he says.

That’s the main theme: what is happiness? Where does it comes from? The Trolls are always singing and dancing but insist there’s more to them than just that. They also scrapbook. The characters are based on a line of toys that was popular back in the 1960s. Here they seem to be disco enthusiasts. One of their parties is so noisy the dreaded ogres called Bergens find them, capture a few and take them home to eat. Ever-optimistic Poppy (Anna Kendrick) drags the never-happy grouch along to go rescue them. That brings them up against a sad king (Christopher Mintz-Plasse), a scullery maid in love with him (Zooey Deschanel) and a devious power in his court (voiced by Christine Baranski) who’s got a twisted take on happiness. This is a good kids’ film. It’s witty, heartfelt and subtle in its life lessons. (International Village, Marine Gateway and suburban theatres) 3 ½ out of 5

TOWER: We all know about this mass shooting in the United States. It’s recalled every time there’s another one because it was the first. But we really know very little about it; just a few facts, that on Aug. 1, 1966 Charles Whitman climbed up a tower at Texas University in Austin and started shooting? He killed 16 people. This film tells the whole story from the first shot to his death by a rookie cop and a store clerk who dared to go up and stop him. It’s told in news footage, new interviews with people who were there and with animation to illustrate key incidents. 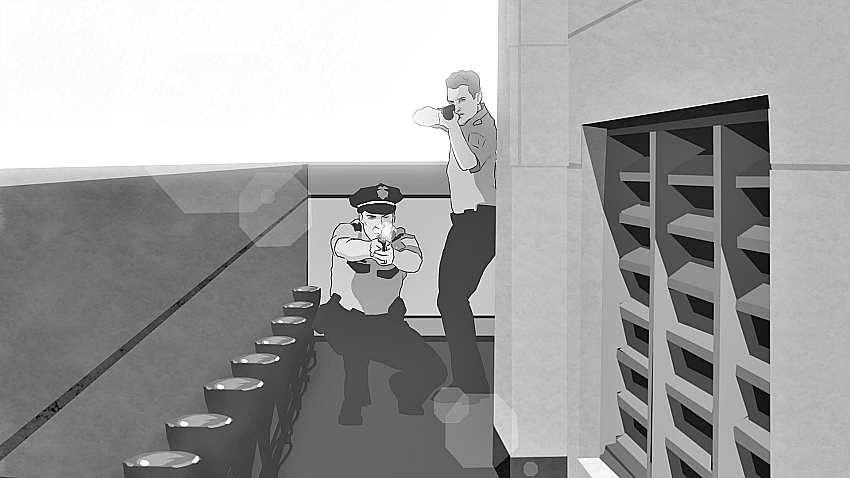 The most chilling story is of a young pregnant woman who was injured, unable to do anything but lie in the hot sun.  She got help from a woman who dared to creep over to her side. The whole film plays like a tense and developing drama. Oddly, according to one witness, people there never talked about it. “Society’s crime,” says Walter Cronkite in a clip but since it follows a montage of other mass shootings since then, the pronouncement seems inadequate. Most of the film is very powerful. (Cinematheque) 4 out of 5

SPA NIGHT: Like Moonlight, this film shows a young man’s quest to find his identity. Unlike like it, homosexuality is up front, along with a parallel stream that’s just as important: his identity as the son of immigrants, from Korea in this case, living in Los Angeles. Their restaurant has gone broke and the pressure to succeed now intensifies on the son. Writer-director Andrew Ahn understands and shows vividly how parents like that tend to shift their ambitions on their children. They need David, played by Joe Seo, to pass his SAT exams and get into a good university. “You have to think long term,” mom says. “You’re going to find success for all of us,” dad says.

David lies that he’s working on it and instead takes a job at a men-only bathhouse. What he sees there, lots of nudity and action back in the shadows, stirs his other identity issue. The two streams are nicely balanced and intersecting. The film is well-observed. It played at the recent Queer Film Festival and would fit just as well into the current Asian Film Festival. Seo won a special award at Sundance for his acting.  (Cinematheque) 3 out of 5

LAVENDER: Creepy, gothic doings in an Ontario farm house. Repressed memories. Traumas suffered as a child. The elements are all there for a psychological thriller, maybe a ghost story. The atmosphere is there too, marshaled by director Ed Gass-Donnelly. What’s not there are scares and chills. The story is a bit too bewildering to really get to you.

Abbie Cornish plays a woman who loves to photograph old rural houses. “They’re glimpses into people’s lives”, she says, just like heritage advocates everywhere. That concept develops no further but a tangled story that feels like one we’ve seen before does. She crashes her car to avoid a young girl, unleashes memories that according to her shrink (Justin Long) require her to visit her old family home, where 30 years ago her family was murdered and she was found in shock. An uncle (Dermot Mulroney) is nearby to intone grim insights about her history. The young girl appears again; a secret room is found, someone is lost in a farm maze and it all comes to a noisy climax without much clarity. Strong mood. Fuzzy answers. (Park Theatre) 2 ½ out of 5