Reviews of the new Star Wars movie, The Danish Girl, Sisters and Youth

Redmayne and Vikander play Danish artists who wind up in Paris. He paints landscapes; she paints portraits and one day when her ballerina model doesn’t show up, she gets him to pose. On his face, he shows the tingle he feels inside when he puts on the dress. Later he caresses his wife’s slip. Bit by bit he makes his movements more feminine and visits a peep show to study more. His conversion, as acted by Redmayne, is extraordinary. His wife, after urging him to stop because “this is absurd,” comes around easily to support him. First she takes him to a party dressed as a woman and then goes with him to Dresden for a sex-change operation. Vikander is excellent showing the evolving emotions she feels. The film is respectful and sensitive, a bit clunky in some of the dialogue but much more easy going than I expected, for much of the way at least. (5th Avenue) 3 ½ out of 5

YOUTH: Aging is the real theme of this wistful and sometimes melancholy dissertation. Yes it’s charming much of the time, and well acted, but also a bit too arty. It leaves the uneasy feeling that maybe we don’t understand it all. For instance, do the cryptic comments by the masseuse actually mean something? There’s more than a little Fellini-influence in Paolo Sorrentino’s film. His last one, The Great Beauty, also had that but communicated more clearly and won an Academy Award. 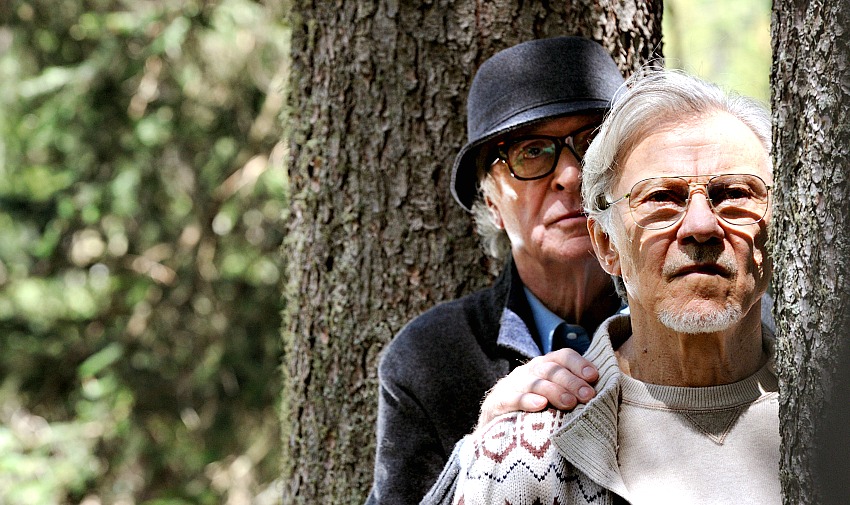 Michael Caine and Harvey Keitel play longtime friends staying at a spa in the Swiss Alps. Keitel is a movie director working away with his staff on another script. Caine is a retired conductor and composer invited by Queen Elizabeth herself (through an obsequious envoy) to come play his most famous work at a birthday party for Prince Phillip. He won’t. Paul Dano knows why. It’s a minor work that’s become overly popular, exactly as he, an actor, is only known for playing one sci fi character. Of such musings about missed chances and life moving by is this film constructed. There are many small allusions to old age and, in contrast, to youth, Miss Universe bathing stark naked, for instance. But as evocative as they are, they don’t coalesce into a firm theme. Jane Fonda makes a late appearance as a super-foul-mouthed actor. She perks up the film, but also adds to the meandering problem. (5th Avenue) 2 ½ out of 5

THE BOY AND THE WORLD: You could, of course, take your kids to another Alvin and the Chipmunks movie this holiday or do far better with this one from Brazil. Probably only older kids though because there’s no dialogue, just pictures, sound and music, to tell the story. Also there are sophisticated themes here the younger ones wouldn’t pick up. 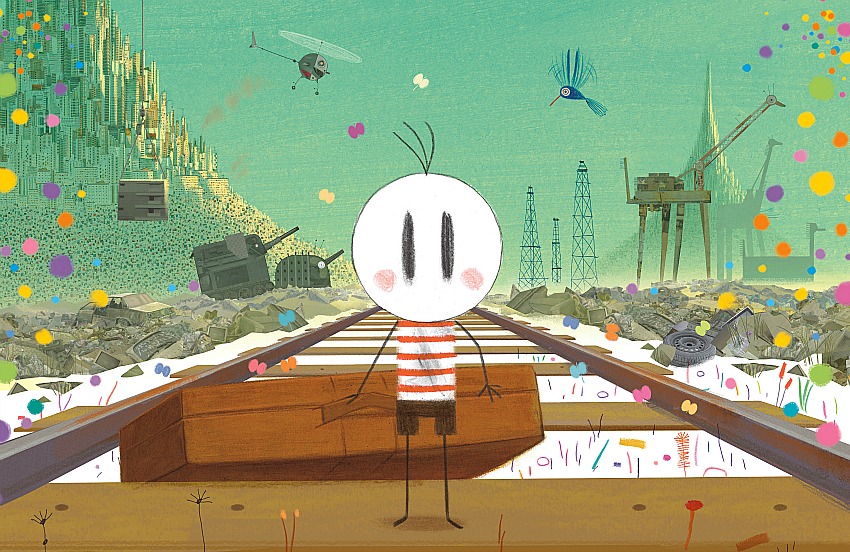 A boy enjoys a simple life amid vibrant colours and sounds in the country. When his father goes off to get work in the city, he sets out to find him. That search becomes his entry into the modern world. It’s darker, factories spew smoke, people lose their jobs to machines, military parades distract them. They live in favelas and some scavenge in the landfills. The artwork starts as simple child-like drawings and evolves with the story into gloomier more detailed techniques. The film has a definite left-wing and progressive picture of third world society. But it also has a touching child’s eye story of a boy and his family. It’s a good combination. (VanCity is playing it at kid-friendly times through the next two weeks. Check their website: http://www.viff.org/theatre) 3 ½ out of 5

HITCHCOCK TRUFFAUT: In 1962 the French director Francois Truffaut (only three films at the time but a lot of film journalism) got the great Alfred Hitchcock to sit down and talk to him about cinema. He had many films to reference starting back in the silent era to his latest, Psycho and The Birds. Over a week’s time, Truffaut taped it all and later produced a book that has become a sort of how-to manual to many filmmakers. Wes Anderson, David Fincher, Richard Linklater and seven others appear and attest to that. Martin Scorsese says “we became radicalized.” James Gray says Vertigo contains “the single greatest moment in the history of cinema.”

Hitchcock, heard in the original tapes, is more matter of fact about his art but does analyze films and scenes in detail. He talks about “playing the audience” and whether he should have experimented more. His “actors are cattle” comment originates here. Hard-core fans won’t find much that’s new, but with lots of great clips, praise from acolytes of “the artist who wrote with a camera” and words from the man himself, this is a nifty overview of his career. (VanCity Theatre) 4 out of 5

PEGGY GUGGENHEIM: ART ADDICT: What a life this woman led. Fabulously rich, devil-may-care in nature but beset by tragedy (dad goes down with the Titanic, sister dies in childbirth, another throws two children off a hotel roof) she emerged as a key figure in promoting modern art. She discovered Jackson Pollock, Mark Rothko and others, hung out with Picasso, Marcel Duchamp and many others and bedded many of them before showing their work in galleries she started in London, Venice and New York. She began her collection in Paris but had to sneak it away ahead of the Nazis in 1939. All the while she was a “lonely lady” with a bad nose job, a narcissist and a self-promoter,  according to the people who talk about her in the film.  She also talks about herself in some long-lost and recently re-discovered audio tapes. Quite candidly, about an intriguing life. (VanCity Theatre) 3 ½ out of 5

ALVIN AND THE CHIPMUNKS: THE ROAD CHIP: The 4th movie about the singing rodents doesn’t seem to have a lot of critics pleased. One who did like it had this to say: “The story isn't half as dumb as it could've been.” Of course it’s children who will decide on that. This is what they’ll see: Alvin, Theodore and Simon fear their keeper (Jason Lee) is about to take a wife and head to Miami to sabotage that move. (International Village and suburban theatres)