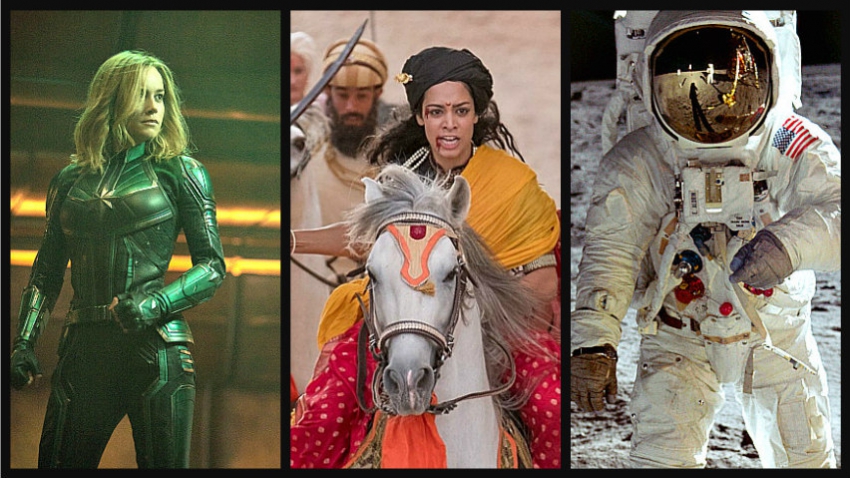 The 14th Vancouver International Women in Film Festival continues right through the weekend at the VanCity Theatre. Many of the films, especially among the shorts, are local. You’d do well to check out  www.womeninfilm.ca/ to see what’s playing.

Today for instance, in honor of International Women’s Day, you can see two films for free. At one o’clock there’s She is the Ocean, from Russia, which shows you nine women with a “profound love for the sea.” Their methods range from ocean sports, to science to cliff diving. At 3:30 there’s The Feminist, about a most influential politician in Sweden. A post-film discussion will include the producer.

I review three other films from the festival down below, after these new ones.

Women in Film: Swords and Sceptres: the Rani of Jhansi: 2 ½

CAPTAIN MARVEL: After the enormous success of DC’s Wonder Woman movie you knew the plucky rivals at Marvel had to bring us a female super hero of their own.  And there, in the enormous back catalogue of their comic books they had Carol Danvers, one of the several versions of a character they called Captain Marvel. Captain of what? Who knows? Parts of her story aren’t all that clear. The movie even starts with a dream sequence; an instant sign that not everything will make sense. That problem is compounded by the main villains (are they actually bad?) who are shapeshifters. They can make themselves look like others and it’s hard to know who is evil and who is not. Sometimes they switch. An initially involving story gets murky as it goes along.

Carol Danvers, played by Oscar winner Brie Larson, is caught up in one of those intergalactic wars so common in the Marvel universe. Military tough guys called the Krees are fighting the Skrulls, who when they haven’t shape-shifted look like goblins. Jude Law plays her trainer; Annette Bening is a dim figure in her memories called Supreme Intelligence and Ben Mendelsohn is the Skrull general who captures her. She gets away though, crashes through the roof of a Blockbuster Video store (it’s 1995, you see) and somewhere near a Radio Shack meets a young Nick Fury (Samuel L. Jackson, digitally made to look 25 years younger).

The Skrulls are trying to get hold of some “light-speed” technology. Danvers gets involved in stopping them, all the while learning who is good and bad in their war and at the same time reclaiming memories about her early life, in other words, her identity. It’s a complex scenario that the two directors, Anna Boden and Ryan Fleck, have trouble telling properly. Their background has been in contemplative indie films. This one is big and fun but ordinary, short on gut-wrenching excitement and loaded with hard-to-follow battle sequences. They do better with the female empowerment side of Carol’s story, sometimes subtly, as when she’s told to avoid being so emotional; a couple times hamhandedly as when she’s told in the pilot’s cabin on a plane that “there’s a reason it’s called a cockpit.” Larson comes off as a little too nice for the role but she is a fresh presence in these films. She’ll be back as part of The Avengers next month. (Showing at theatres all over, including five in Vancouver: Dunbar, 5th Avenue, Scotiabank, Park and Marine Gateway) 3 out of 5

APOLLO 11: It’s almost 50 years since Neil Armstrong stepped out onto the surface of the moon. It’s an event that’s been told, analyzed or portrayed countless times (just five months ago by Ryan Gosling in the movie First Man). So, what could possibly turn up new about it? Lots, it turns out: spectacular film footage and revealing sound tapes taken at the time and almost forgotten. NASA documented every step with the latest equipment, the 70-millimeter film Hollywood was using for its most prestige blockbusters. Only a bit of that has been seen publicly, but it was cropped down in size thereby missing the fine detail it contains. Most has been sitting in storage all these years. Filmmaker Todd Douglas Miller heard about it, restored it and made this invigorating documentary out of it.

The attraction here is how close these films take you to Armstrong, Buzz Aldrin and Michael Collins as they train and then go on what Walter Cronkite calls “the greatest adventure in history.” A few news clips from him are all there is for narration. The rest is actual sound from Mission Control, setting up the launch, permitting every stage and always talking to the three astronauts. Some funny comments come back. Then  there’s Armstrong saying his famous lines (“The Eagle has landed”) plus recounting what he sees as he goes down the ladder (“Fine sandy particles.” “Stark beauty”). The camera shows it all to us as he goes down. It’s one of several thrilling moments along with the original countdown, the LEM splitting from the rocket, the sight of the earth emerging from behind the moon. There’s scientific detail like “the trans lunar injection maneuver” and animation to explain those before they happen. You get a brand new and fuller appreciation than ever before of what and how they did it. (International Village, Coquitlam and Langley)     4 ½  out of 5