Vancouver Folk Music Festival inspired me to move to Vancouver. I haven't missed one since. 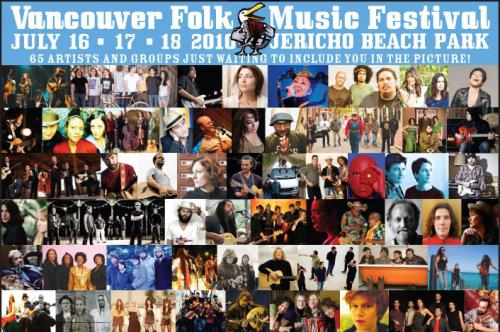 I have so many memories of the Folk Festival, but the one that stands out most for me is the moment I realized that there was nowhere in the world I wanted to live more than Vancouver. I was looking out at the water and the mountains and I literally heard the call.

I’m sure a lot of people have had similar experiences on beautiful sunny days here at the beach – really, who wouldn’t? – but I’m glad I followed through and actually made the move from California.  I often respond, when asked the inevitable question, that I moved to Vancouver because of the Folk Fest. But, really, it’s because of what the Folk Fest represents to me.  More than the natural beauty or the abundance of talent, it all comes down to the sense of community I experience at the Festival, the same sense that carries with me living in this city throughout the year.

The Folk Fest is where I see just about everyone I know in Vancouver.  Since 2004, when I was a Folk Fest “virgin,” I’ve attended every Folk Fest weekend with my “chosen family” in Vancouver, my two best boyfriends who are married and have an adopted daughter, now eight years old.  “The Boyz” (my collective name for their family) introduced me to the Folk Fest rituals they’d formed over the years, and which I’ve integrated as my own.

First and foremost, we always buy the full weekend ticket. None of this picking and choosing about which day to go.  Contrary to what others may say, regular life does NOT carry on over Folk Fest weekend.  It is as sacred to me as the Jewish High Holidays, meaning unless there were an extraordinary reason to miss it (e.g., a death in the family), it’s on my calendar a year in advance.  The nice thing about committing early is that the Festival offer great advance deals, and if you’re a Festival member (which I am), you get an even better discount.  I got a weekend pass for $95 – that’s three nights and two days of incredible music for less than a single ticket for “The Lion King”.

Entering the Festival gates for the first time on Friday night feels just like entering Disneyland’s “Magic Kingdom” did when I was a kid… there’s truly something other-worldly about the place once you step inside.  The Boyz and I usually arrive after the evening concert has already started, so we miss the rush of the crowds when the gates first open and, after dropping our blanket in the vicinity of the main stage, head to the food court.

But wait, did I say “the rush of the crowds”?  Though it was supposedly curtailed a few years back, the “Birkenstock 500” is still around in spirit.  The B-500 is named for the hippie crowd (remember, this Festival goes back to the 70’s) that literally sprinted to secure their places by the main stage. Apparently some of the old-timers had a “take no prisoners” approach to the process, and a few years ago, the organizers had to disallow running when the gates opened because people were getting hurt from all the jostling.

Having been at the gate for the last couple years as it opens on weekend mornings, I’ve observed that these same folks will speed walk until they’re out of range of the poor volunteers assigned to monitor them, and then, well, they can’t seem to help themselves… the sprint and jostling begins for the spots closest to the stage.  We’re talking old-timers here, people… I’m in my mid-40’s, and I’m one of the kids in the crowd.  Old habits die hard, I guess.  There’s some method in this madness, though… the location of one’s blanket (or gigantic tarp, if you’re like most) is key because the main stage is huge and, if you can handle the crowds, most will agree that it’s usually more fun to be closer to live music.