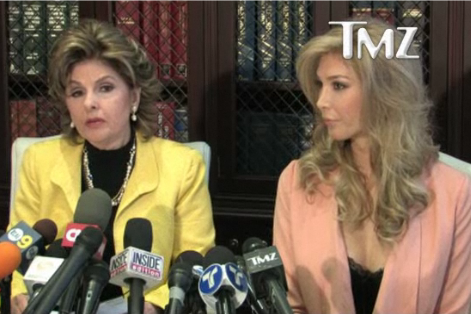 Screencap of Jenna Talackova from TMZ's video clip of the press conference.

In a press conference this morning, Jenna Talackova, the pageant contestant disqualified for being transsexual by the Donald Trump-owned Miss Universe Canada, asked Trump why he cares whether she was born a woman when she doesn't care whether he was born male.

She made this and other statements with help from her new high-profile lawyer, Gloria Allred. It was announced that she now has legal teams formed in Canada, New York and California.

"When I was selected as a finalist, I was thrilled. I had
always dreamed of being in the Miss Universe competition, and
having an opportunity to represent my country, Canada," Talackova said.

When she got the news of her disqualification, she admits she was devastated.

"Jenna was being eliminated as a contestant not because she lacked
the beauty or charisma that was required," said Allred, "but because she was not a 'naturally born' woman."

If Canada considers Talackova a woman, why not Miss Universe?

Allred said Talackova's Canadian passport, birth certificate and driver's license all identify her as a woman, and to compete in the Miss Universe Canada contest. She said that Talackova should have been judged on "who she is now," not on what she "was or was not like" at birth.

"Jenna gave the pageant her time, her best efforts, and her money. She did not think for one moment that what she might've looked like at birth would be relevant," said Allred, while Talackova sat quietly by her side, her eyes mostly downcast.

Allred and Talackova also expressed confusion at the newest pageant statement, posted yesterday on its website, which said that Miss Universe will reverse their decision to disqualify Talackova, "provided she meets the legal gender recognition requirements of Canada, and the standards established by other international (Miss Universe) competitions."

Talackova to Trump: admit you were wrong

Allred said that Trump needs to step up and be a leader instead of releasing "wishy-washy" statements and looking to other competitions to decide his next moves.

"Mr. Trump, admit that you were wrong and get rid of your trumped up rule," she challenged.

Allred and her client want not only for Talackova to be allowed a fair shot at the competition, but all future participants of the beauty contest.

"I want Mr. Trump to clearly state that this rule will be
eliminated, because I do not want any other woman to suffer the
discrimination that I have to endure," Talackova said.

The 61st annual Miss Universe Canada pageant will begin next month, on May 11.