For university hockey fans, the Cinderella story of the year was the turnaround season of the UBC women’s hockey team. The Thunderbirds rebounded from the previous season’s last place finish to take the Canada West title and make their first ever appearance at the CIS championships.

“We opened our season with a victory and we got on a role and just wanted to keep it going,” said defenceman Emily Grainger from Sooke, B.C. 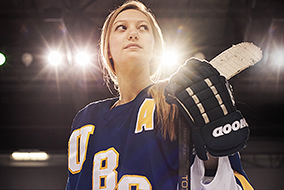 Kinesiology graduate Emily Grainger was part of the women’s hockey team that rebounded from a last place finish in 2012 to win the Canada West title in 2013. Martin Dee Photograph

“It may have seemed like a magical story but we fought tooth and nail for it,” says the graduating kinesiology student. “We really wanted to prove that we were better than the results showed the year before.”

The team approached the 2012–13 season with a sense of renewal. They had a new coach, some high profile recruits, and a chance to make a fresh start. Their commitment to improvement extended beyond the ice. They set an academic goal to boost the team’s average GPA and increase the number of Academic All Canadians— a designation given to varsity athletes who maintain an 80 per cent average or higher.

“No one player stepped up and took control. It was everyone trying to be their best at every game and at every practice.”

For Grainger, the highlight of the season was the Canada West championship game. UBC was playing the CIS-defending champions the Calgary Dinos and Canadian hockey hero Hayley Wickenheiser. The team won the deciding game and the title by a score of 5-2.

It was the first championship of any sort for UBC women’s hockey since the team began CIS play in 1997. At the national championships, the Tbirds had one victory and finished fifth overall.

Grainger is optimistic that this year’s success was not a fluke. She says that in the five years she has been playing, the sport has improved across the league—the hockey is faster, there are more international players and the goaltending is much better.

“I think that women’s hockey is poised to become another UBC sport powerhouse,” she said. “It’s something people can look forward to and get excited about.”

With her undergrad and varsity hockey career behind her, Grainger is still figuring out what’s next. She’s hoping to start a master’s of physiotherapy, and she may be playing is on the newly formed Canadian  Women’s Hockey League.

“After this season, I’m not ready to stop. I feel like I’m just coming into my prime.” 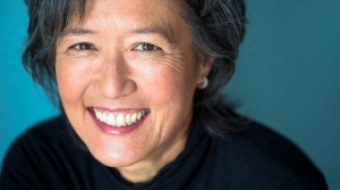 Cloud U – UBC ventures into the virtual university

No cash, no crime?

Fashion is a feminist issue