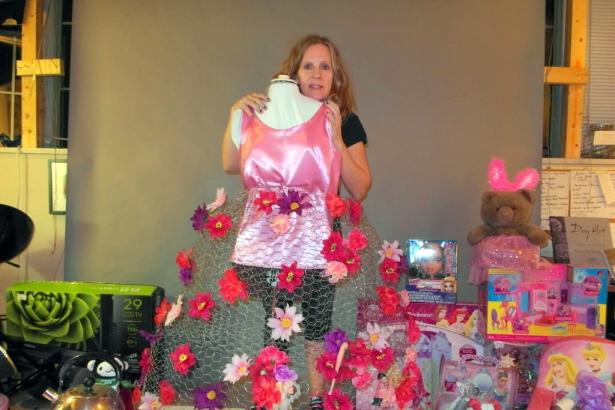 Karen Moe in her studio the night before the Eastside Culture Crawl on Nov 16-18. Photo by Beth Hong.

"This is Thursday night before Culture Crawl," Karen Moe said, sipping from a glass of red wine as she balanced a police hat on the mannequin.

Moe is one of the many visual, performance and industrial artists who will open their work and studios to the public as part of the 16th annual Eastside Culture Crawl. The Crawl is a three-day visual art festival in which East Vancouver artists open their studios to the general public.

When The Vancouver Observer went to see Moe at her live/work studio at ARC, she was busy arranging Barbie dolls and princess paraphernalia around a clothing design mannequin donning pink silk sleeveless top and a custom made metal skirt around the bottom. 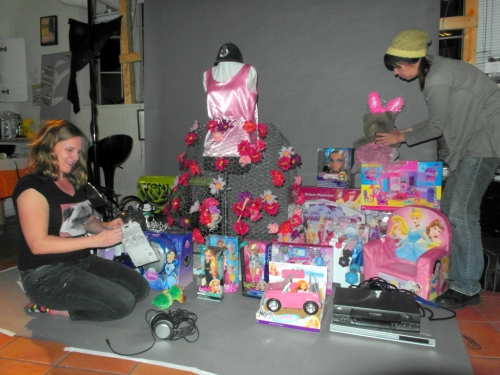 Helping Moe clean and set up was her friend Jennifer Safronick, a videographer and academic.

"People can come, and it'd be really great if they just bring any stuff they don't want anymore, that's outlived its use and I'm going to be making a big pile of stuff," she said.

She said that one of the points of her piece is to engage the public, and encourage them to see the bonds between the normalization of gender and beauty norms, as well as their connection of capitalism.

"I like incongruencies, or put things together that are apparent contradictions. It's shifting perspective, making people think differently," Moe said about what she hopes her art communicates to its consumers.

Burlesque and feminism: It's complicated