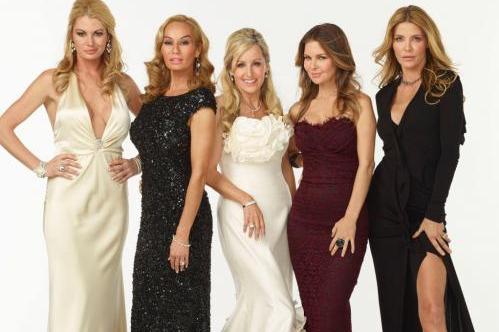 Another episode of The Real Housewives of Vancouver effectively delivers more drama, back stabbing comments and (to switch things up) a lavish getaway.

It’s Ronnie’s turn to organize the group gathering in episode eight and, typical to Ronnie who constantly brags about the most expensive this, or the most lavish that, invites the girls out to Tojo’s.

The award winning restaurant, with its master sushi chef, sits in its central location off West Broadway in downtown Vancouver. Although the idea was for the ladies to enjoy dining out and ‘filling up’ on the best sushi in town, what occurred instead was more childish playground banter, mainly coming from who else, but Jody (surprise, surprise).

The Housewives and views watched last week as Jody stuck up her snooty nose while claiming; “It is very bad luck to cheers someone you don’t like,” ...cue the groans. Taking a final stab towards Mary, Jody announces her input over her friendship with Ronnie: “Ronnie’s fabulous. She doesn’t need someone like [Mary] in her life”.

But as viewers, we all know, that Jody and Ronnie really are malicious and perfect for each other. The one better off is Mary, without either of them in her life. But, this verbal battle didn’t show Mary in the best light either, as she claimed that Jody was both a “wretched” and “evil” human being, which --even if perfectly true -- doesn’t have to be said to her face, and millions of TV viewers.

But by this point, who can blame Mary? The poor woman has put up with way too much bullying and was bound to lash out eventually. Just so turns out that she decided to snap at a sushi restaurant.

Jody and Mary battle it out at Tojo's yet again.

While Jody was busy pretending to be superior to, well, everyone, the other housewives had no interest in the feud, and left the table to let Mary and Jody duke it out themselves. Reiko explained the situation perfectly: “Jody can fight a pretty good fight on her own, she doesn’t need me to throw punches for her”. But the explanation didn’t make Jody feel any better about Reiko’s betrayal, and she proceeded to call her a “lousy soldier”: does Jody not remember that she was arguing against timid Mary, who hates a fight just as much as the next housewife?

After all the drama that had been going on in Vancouver lately, Christina and Mary thought a vacation away was necessary, and who better to tag along than Marika and Kevin?

The state of ultimate relaxation commenced as the two housewives traded their defensive claws in exchange for laughter and a steady flow of champagne while celebrating in the limo ride to the resort, and Mary commented that she finally felt that the heavy "bricks had fallen off her shoulders".

As usual, life of the party was her gay best friend Kevin, who brought humor to the screen as he struggled to drag his wheeled Louie Vuitton suitcase through the sand on Tulum beach in Mexico. He complained that they had dug the Panama canal in the sand, all the way from Belize to Casa Chic.

On Tulum beach, the location that inspired Mary’s tequila based cocktail idea, Mary decided it was time to share the drink within the safety of her inner posy. Marika (who was introduced to the show as being Jody’s friend) is seen in the background sneaking a text out to -- you guessed it -- Jody, about Mary’s plans to patent and sell Blue Tulum back in Vancouver. Remember how best friend Ronnie has her Rehab wine also in the works?

And so the gong sounds for round 24 of the boxing match between Mary and Jody. Jodie immediately took shots at Mary’s Blue Tulum cocktail, sneering that it was “not very original” and that Mary always “copies whatever Ronnie is doing”. Jody starts stirring up trouble between Mary and Ronnie (who, despite everything, were ‘best friends of 18 years’) and plans to reveal the secret information to Ronnie that Mary is in Mexico on a getaway without her -- and what's more, she plans to market a new alcoholic beverage.

While plans of friendship detonation are going on in Vancouver, Mary, Christina, Marika and Kevin are enjoying a Mayan self-purification ritual on the beach. Leave it up to Kevin to turn the "cleansing" spa event into an R-rated incident as he clays Christina up, including her, ahem, assets. He's gay, but still.

The scene shifts back into a more serene moment as the four hold hands, meditate, then go into the ocean to wash away their hurtful experiences.

After the time the spent in Mexico, everyone seems calm and relaxed. During their last night, they sing with a mariachi band and dance the night away at a club. Christina ends the trip by commenting that the change she has seen in Mary throughout the trip is surreal and that she is finally at peace.

But, as they head back to Vancouver they’ll quickly find out that their newfound peace won’t last for long. As shown in the scenes for this week’s episode, Mary and Jody go at it again, as Jody threatens to sue Mary for stealing her drink idea.