At City Hall hearings on casino expansion, proponents and opponents struggled to be heard 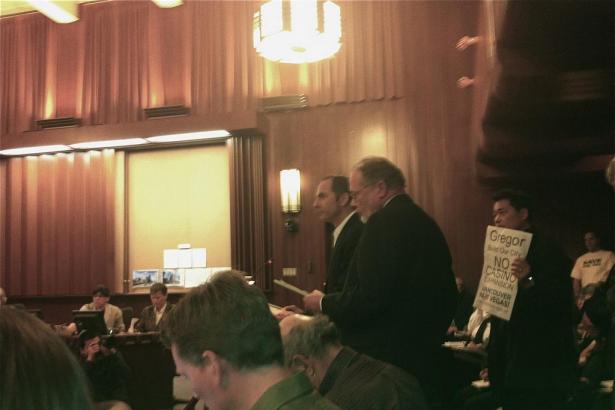 An hour before the public hearings on the proposed casino expansion at BC Place, Vancouver Not Vegas organized a casino protest on the steps of City Hall.

Passing motorists honked their horns in support of the group.

Michael Wong, who came to oppose to the casino expansion, thought that the new casino would cause many seniors to gamble their money away, causing them to fall into poverty.

“A lot of old people, they get money at the end of the month and then they go down there and in a day, they spend it all," said Wong. "And then they go line up at the food bank. And there are a lot of them.”

While he was talking, a passerby in support of the casino started a debate with Wong.

“Did you know that the casino creates jobs?” he asked. “(That) it creates revenue for the city? A lot of people need a lot of money. I don’t think you people know what you’re proposing.”

Shortly before 7:30 p.m., people packed the council chamber on the third floor of City Hall. There was scheduled to be over 160 speakers.

Many participants were not scheduled to speak, but came to show their support for or against the proposal.

Susan Wilson, a British woman who was at the hearing with her husband, said, “I think it’s criminal. Absolutely criminal.”

Michael Maclean, another person not in support of the expansion, said, “I think it would change the city's image. I’m not anti-gambling or anything, but the idea of a mega-casino as being one of our main tourist attractions I just don’t like. We’re like an outdoor city and that’s just not our style.”

Mary Von Delanoe had a similar opinion. “I think it is going to totally change the character of the downtown,” she said.

During the hearing, David Podmore of the BC Pavillion Corporation, representing the casino applicant, tried to explain how many previous big projects in the city also had controversy surrounding them.

He used examples such as Expo 86, the Vancouver Winter Olympics, rapid transit and BC Place.

“I only remind people that in all these projects they had controversies. They had detractors,” he said.

During question period, city councillors and Vancouver Mayor Gregor Robertson directed questions and concerns to individuals involved with the project.

Around 10 p.m., citizen speakers each had five minutes to voice their opinion.

Speakers included casino employees of the Edgewater Casino, a representative from the Greater Vancouver Alliance of Arts and Culture, and Vancouver citizens.

The hearing went until 11 p.m.

Not all people were able to be heard from last night though, so hearings are scheduled to resume tonight at City Hall at 7p.m.

The proposed $500-million project would have a casino, along with two hotels, built beside BC Place.

The casino would be the biggest of its kind in Western Canada and would employ double the number of workers at the current Edgewater Casino.

They will continue on following nights if necessary as well.

See more
Livin' the life of a rich dog
Is North Vancouver ready for a chlorine leak during an earthquake?