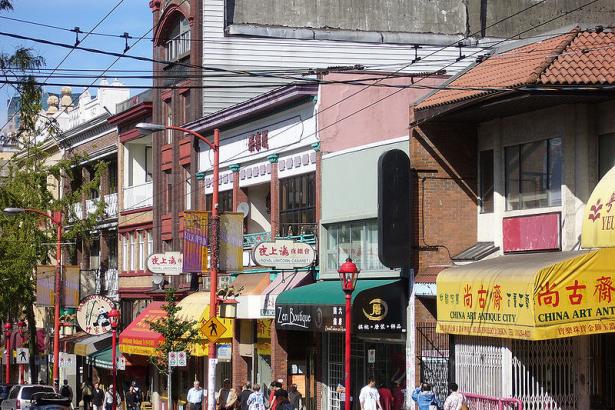 One of the stories simmering below the surface in Vancouver has been the proposed “Historic Area Heights Review,” which anticipates seven 15-storey condominum developments in the Downtown Eastside (two condos North of Pender between Carrall and Abbott, and five in South Chinatown).

That's right, Chinatown -- historic home of the city's Chinese-Canadian community and recent magnet of a string of new Waves coffee shops and posh-looking venues to eat and drink (Cafe Brixton, London Pub). If the condo projects are approved, historic Chinatown may be undergoing a big facelift in the years to come.
According to the DTES Neighbourhood Council (DNC), a handful of Chinatown residents met on Saturday at the Lore Krill co-op about the proposed building of high-rise condo towers in their area. Many residents were hearing about the proposed condos for the first time and expressed fears of increased rent in the neighbourhood.
DNC board member Ivan Drury says of the 15 people who showed up to the meeting, most had never heard about the proposed condos.
"No one had been consulted in advance about the condos," says Drury. "Which is disturbing, because the city is claiming they have 100 percent support from Chinatown, but they've only consulted the business organizations so far and not the residents." He notes that the City had "ample opportunity" to notify residents about it, as City Council approved the report on the project last January.
Drury says residents were concerned the lasting impact of new condo buildings in their backyard. "The condos will raise real estate prices in the neighbourhood," he explains."People are concerned that when high-income people move into the condos...new shops catering to them will come into the neighbourhood and drive out the old heritage shops."
Drury says one of the most compelling arguments came from an elderly Chinese woman who said that the area provided her with a sense of independence, and that many Chinese seniors come in from outside of Chinatown to play mahjong, shop, and feel the independence that they would not feel elsewhere.
"Chinatown is also historically low-income and working class," he says. "It's not just about how much the buildings are worth, but also about the assets of community -- friends, neighbours, family." He says he hopes that those involved in the condo proposal will understand the value of community which will be lost when the area is opened up to high-income condos.

A public hearing about the condos will be held on March 17. If you'd like to express your thoughts at the hearing, register by phone before 5:00 pm, March 17 by calling Tina Hildebrandt in the City Clerk’s Department at 604.873.7268.
Read More:
Share on Facebook Share on Twitter