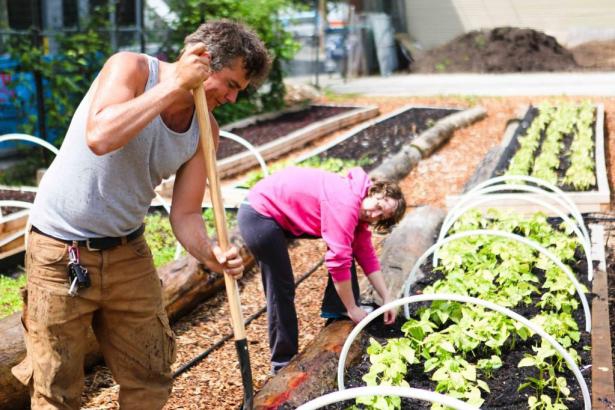 “I've been a drug addict, but I'm at a transition point,” says Discount Dan, reaching through the alley's chain link fence to shake my hand. “You guys taking volunteers?”

The long rows of Hastings Urban Farm – located on an empty lot at 58 West Hastings, right off of W2 – are sprouting green, leafy vegetables as workers water the crops and haul in wheelbarrows of dark soil.

Derek King, one of the locals hired to tend the harvest this summer, leans on his shovel as Dan explains why he wants to help grow food in the Downtown Eastside, just around the corner from his home at First United Church shelter.

“I'm not wired to heroin anymore,” Dan says. “I want to do something positive instead of being a thief.

“This garden is awesome. It's great.”

The urban farm, a project of the Portland Hotel Society (PHS), is on the site of the former gravel parking lot which, in 2010, became an Olympic protest tent city. In February, the Vancouver Street Soccer League – a team made up of homeless people and other Downtown Eastside residents – laid down a turf pitch and started playing on the unused Concord Pacific-owned lot.

The same week also saw poverty and food insecurity make headlines, with an unprecedented Canadian visit by the United Nations special rapporteur on the right to food. Olivier De Schutter blasted the federal government for what he called a “self-righteous” reaction to the concerns raised during his visit, in which Conservative ministers criticized him for focusing on Canadian inequality instead of more impoverished nations'.

“It’s even more shocking to me to see that there are 900,000 households in Canada that are food insecure and up to 2.5 million people precisely because this is a wealthy country,” he told reporters. “It’s even less excusable.

“It’s not because the country is a wealthy country that there are no problems. In fact, the problems are very significant and, frankly, this sort of self-righteousness about the situation being good in Canada is not corresponding to what I saw on the ground, not at all.”

De Schutter, who visited remote Aboriginal communities and inner-cities across the country during his visit, was also criticized for not visiting Canada's north. But the ultimate message of his visit was that the country needs to take food insecurity – particularly on reserves and poor urban areas like the DTES – much more seriously. That, he said, requires “more political will to be invested in this issue.”

A farmer's life is feast or famine