Free things to do to celebrate New Year's 2017 in Vancouver 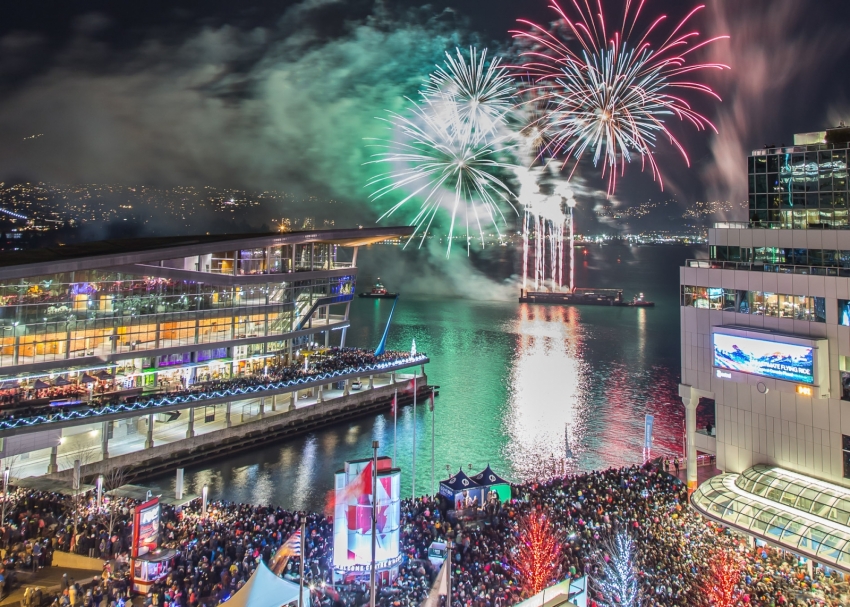 If fact, those of us looking to do it up this New Year's without breaking the bank will be more likely to don gortex, bright thrift shop clothing, sunglasses, hula hoops, ice skates and perhaps even bathing suits to ring it in Vancouver-style.

Here are our suggestions for five, free, fun ways to celebrate the New Year 2017 in Vancouver.

While there are ticketed events taking place in and around Canada Place at the same time, the outdoor community celebration is free.

The street party begins at 6:30 pm at Burrard Landing and in Coal Harbour and features musical entertainment headlined by The Sheepdogs.

There are food trucks, live on-site broadcasts, a family fireworks display suitable for young children, and a midnight countdown with fireworks over Coal Harbour.

The family fireworks display for the little ones starts at 9pm and includes a countdown from the stages and a five minute burst of fireworks from the offshore barge.

Whether you're taking in the family fireworks or waiting for the official countdown at midnight, keep in mind the fireworks are only visible from certain locations.

The fireworks are not viewable from English Bay, False Creek or Kitsilano.

To avoid traffic gridlock and parking mayhem and for a hassle free transportation experience, consider the second really great free thing to do on New Year's Eve in Vancouver...

You heard that right: buses, SkyTrain, Canada Line, Seabus are free, free, free from 5pm Dec. 31 to 5am Jan. 1, 2017. All will be running regular Saturday schedules with some routes running additional evening/late-night trips.

So leave your compass card at home for the evening. And if the thought of a massive street party sounds fun but not revolutionary enough for you, check out free event number three.

Tom and Gary have staged DDP, described as a wedding reception crossbred with Burning Man, in 30 cities across North America and even have a manifesto: http://bit.ly/PartyManifesto

They're serious about partying and this New Year's Eve in Vancouver they're kicking it up a notch. They've teamed up with CFRO Community Radio to broadcast their signal out across the entire Lower Mainland.

That means their “Tinder Of Partying” app will instantly connect all tuned-in partiers to create a giant city-wide party of hundreds of people, carrying boomboxes, and a DJ who wears a backpack, containing an FM radio transmitter.

The result is a mobile, synchronized sound system.

Or says the DDP website, "This Open-Source Dance Party roams the night, generating complete awesomeness, street by street and block by block, onto buses and subways, into public fountains and beyond. Inevitably interfacing with the public, together we create an infectious epidemic of fun, a roaming Party adventure that lasts all night long."

This year's theme is Prom meets potluck or #PromLuck. Costumes and props are strongly encouraged. Check the website for starting locations, info on downloading the app or how to join the Elite Banana Taskforce.

If running through the streets dressed as a thrift store super hero and carrying a boombox seems like a decidedly unmeditative way to bid farewell to 2016 -or hello to 2017- then skating at Robson Square may be more your style.

The public outdoor rink is open from 9am to 11pm on New Year's Eve and 9am to 9pm New Year's Day.

It's free if you have your own skates and $4 if you're renting (cash only).

On January first, dig out your bathing suit or wear a fancy costume, and join thousands of "polar bears" for a refreshing dip in English Bay.

It starts at 2:30 pm and all swimmers must register before entering the water. There's a 100 yard race and coffee and hot chocolate to warm up post-swim.

Participants are asked to bring cans for the Food Bank.

Wishing everyone a happy New Year 2017!