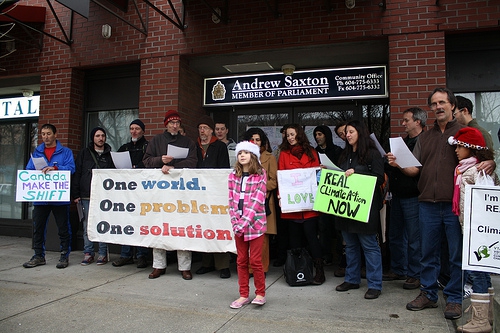 I was late. It was almost 1pm and the Copenhagen Wrap up rally in North Vancouver was 1-3pm. I looked outside and it was a beautiful sunny day, maybe just hang out or socialize with friends. It was tempting. I reminded myself the rally was an important event for Vancouverites to tell our govt and the world we cared about climate change and global warming. Off to North Vancouver I went.

It was going to be a 45 minute trip, jumping on the #20 Victoria bus, going through Main and Hastings area, along the edge of Gastown, then across the water by Seabus to North Vancouver. As I started my adventure, I wondered how many people around me even knew about the two week United Nations Climate Change Conference that just ended in Copenhagen. On the Seabus I met a young man, Christian, who was an ESL student visiting here from Spain. We talked about our plans and he mentioned going to Grouse mountain to go skiing, I mentioned going to the North Van. Rally. He didn’t know about COP15, the rally, or Climate change. I explained about global warming, but I think he was mostly thinking about what a great sunny day it was for skiing. I must admit I can understand, it would be a great day for skiing! We both got off the Seabus, I took his photo and told him to enjoy the snow. On my way again, I trudged up the hill to 3rd avenue along Lonsdale. I finally reached the rally in front of local MP Andrew Saxton at 130pm.

I arrived at the rally to find about 25 people with banners and gathering signatures to support more awareness of climate change in Canada and Vancouver. First reaction was disappointment after a more well attended candlelight vigil on Dec 12th in front of the Vancouver Art Gallery, remember it on Granville mag?

I took some photos on flickr, then spoke with Kevin Washbrook who helped organize the rally. He told me the event had been organized in 3 days by Voters Taking action on Climate Change, Capilano Students’ Union, and Climate Action Network Canada. He said about 50 people attended in total, and 149 people signed the petition calling on Saxton to hold a town hall.

I was impressed that they’d been able to get the rally together so quickly using facebook page, twitter, and Avaaz and other mailing lists. I’m an Environmentalist from way back, so I’m excited to see how social networks are becoming powerful tools for bringing together for social and green causes. Tcktcktck.org had gotten over 15 million signatures to present to the COP15 conference leaders in support climate change. Yes, 15 million! Avaaz.org, 350.org, tcktcktck.org, and other non-profits have been very successful at gathering signatures and support for causes, but I wonder how this will impact smaller local events like the Wrap up rally?

I spoke with Hunter Moyes at the rally, who, with Kevin Washbrook helped organize the Bridge to a Cool Planet event on Oct 24th. Hunter told me that about 8,000 people across the Granville bridge in support of climate change. The Bridge event was part of an internationl day of action by tcktcktck.org | 350.org International day of action with 4000+ events in over 169 countries.