Turn us into police informants and we can't do our jobs, journos argue. 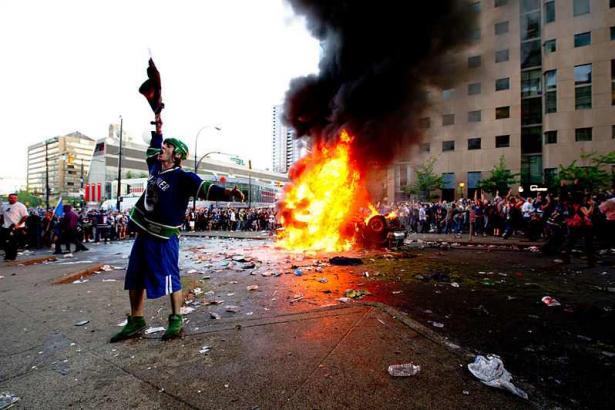 A longstanding argument between journalists and police is playing out in a Vancouver courtroom this week as media outlets that shot photos and video footage of Vancouver's Stanley Cup riot argue that they should not be forced to turn them over to police.

Police say they need a broad range of material to help in prosecuting those who committed crimes. Journalists argue that handing it over would put them in danger and make their jobs tougher, since they would, increasingly, be seen as police agents by those they photographed.

Police have sometimes won the argument, media outlets have at other times.

The Canadian Press has the details:

VANCOUVER -- A group of six media outlets are challenging court orders requiring them to turn over unpublished photos and video from Vancouver's Stanley Cup riot, arguing the orders violate their journalistic integrity while putting their reporters at risk.

The orders demanded copies of all photographs and video gathered during the night of the June 15 riot, when scores of jersey-clad fans burned cars, smashed windows and looted stores after the Vancouver Canucks lost the Stanley Cup final.

But the outlets have filed a petition in B.C. Supreme Court asking to be exempt.

"When journalists' work product is treated as police evidence, their ability to operate as independent and impartial reporters is compromised and potentially their very safety is at stake,'' media lawyer Dan Burnett wrote in the petition, filed Monday.

"The more often such orders are granted, the more likely that rioters in explosive situations will look upon the journalists as evidence gatherers and react accordingly.''

The petition said the production orders are far too broad, asking for each and every image captured on the evening of June 15, regardless of whether they depict a crime.

The production orders cover any material gathered across a large swath of downtown between 4 p.m. and 12:30 a.m.

Burnett noted the riot didn't start until just before 8 p.m. at the end of the game, and was confined to a relatively small area spanning several blocks.

He said the police already have access to tens of thousands of photos and hundreds of hours of video shot by the public, as well as the wealth of photos and video footage published by news outlets.

Burnett argued the police should reapply for production orders once they have identified specific crimes for which they require additional photos and videos to solve.

"The police have an unprecedented amount of video and images of the riot, including their copies of all the material published by the (media) petitioners,'' wrote Burnett.

"Surely they should determine with greater precision what events are lacking in evidence before taking the significant step of obtaining production orders from media.''

After a similar riot in 1994, the police obtained warrants targeting two local newspapers and CBC-TV. A judge ruled the first set of warrants were too vague and threw them out, prompting the police to make revisions and return several days later.

Vancouver police did not respond to requests for comment on Tuesday.

The document required to secure the production orders, known as an information to obtain, is currently sealed, although Burnett's petition said the Vancouver police have agreed to release a redacted version soon.

Initially, the production orders banned the outlets from even acknowledging the existence of the orders, despite the fact that the police held a news conference announcing they were about to hand them out. The orders were later changed to remove that restriction.

Burnett's petition also pointed out what he argued are errors in the production orders, which incorrectly identify the names of the companies that own the media outlets and define a geographical area using streets that don't intersect.

To date, no one has been charged with rioting. Vancouver police handed over files to Crown counsel last month recommending 163 charges against 60 people, but those have yet to be approved.

A 18-year-old man from Surrey, B.C., pleaded guilty last week to possessing clothing that was stolen during the riot, although those charges involved the RCMP and weren't part of the Vancouver police's riot investigation.

In that case, the teen received an absolute discharge.