The spirit behind these articles on getting published is to encourage you with your book by taking you through my ups and downs as a first time author. My climate change book, "The Big Swim," will be published by New Society Publishers in February, 2015. Over the summer, we finalized the title and cover. Meanwhile, I planned a new "big swim" to raise funds for a local climate adaptation project.

In early August, New Society sent versions of the proposed cover. The friends I polled thought were great. Except Shaena. And some part of me held back as well. I went back and forth with New Society Publishers about color and being too literal about swimming. I began to suspect that their game was to do what I asked and show both versions to the marketers who would of course prefer their version. Not that this is an entirely bad thing because they are the experts. But that would make my input an empty exercise.

It was just a few days before the Nine Lake Swim. The boat we needed for the northern lakes wasn’t working. One of the swimmers had an injured foot. Another had a sore shoulder. I had a stomach bug and lost my appetite even while ravenously hungry from all the training swims. The lakes were getting colder by the day. It seemed like everything could easily fall apart.

The catalog copy issue was one thing too many. I read both versions over again and, this time around, didn’t see why mine was so much better. I asked for one change: that the lesson of the ancient jaw bone in one of the stories be appreciation rather than patience. “I’m still learning patience,” I wrote. “Aren’t we all?” the catalog copy writer responded.

So that was settled. The Nine Lake swim boat started working again. The shoulder pain subsided, the foot injury didn’t matter after all, my stomach settled down and everything was back in swing.

As the four of us swam together toward the sandy beach park, the sun dazzled my eyes. The time went slow, as it does while doing one small thing over and over until it adds up. Once in the shade, I saw about fifty people in a line along the beach and heard the beat of a drum in the rhythm of our arm strokes. Everything fused into a long moment of perfection: all the lakes we had been in, each one so different and beautiful; the people who had fed and encouraged us along the way; the happiness of our team; the joy of swimming; and the community who awaited us with food and appreciation.

We raised over $13,000 to test for nutrient sources to the lakes and implement solutions. Hopefully we contributed to a positive foundation for our community’s response to other symptoms of a changing climate as well.

The event further linked swimming and climate change for me. The Big Swim is my story of coming to terms with climate change. The Nine Lake swim became a new, unwritten chapter, a next step in terms of taking steps in synch with my community.

But I don’t intend to become caught up in responding to the consequences of climate change to the exclusion of acting on the causes. As the consequences build, we will be forced to focus on adaptation, like decreasing the nutrients in the lake. But even more important is making political and personal choices that reduce carbon emissions. We have so little time. In Canada, the boreal forests are burning at a historic rate in one of the dreaded climatic feedback loops. A climate-active federal government in 2015 has enormous implications for Canadians and the world.

Regarding the book, New Society sent a cover in the colors I asked for. It was lovely and if it wasn’t 100% what I had hoped for, that was because I couldn’t exactly picture that myself. I let go of the literal truth that I never do breast stroke or swim in water that looks that cold. The cover captured the metaphor, as I had asked for. When the designer sent a slightly different version which settled an aesthetic concern for her, this bit of care brought it even more into focus: a woman swimming toward a glacier that melts into a nautical chart. She projects alertness to what is happening to the world. 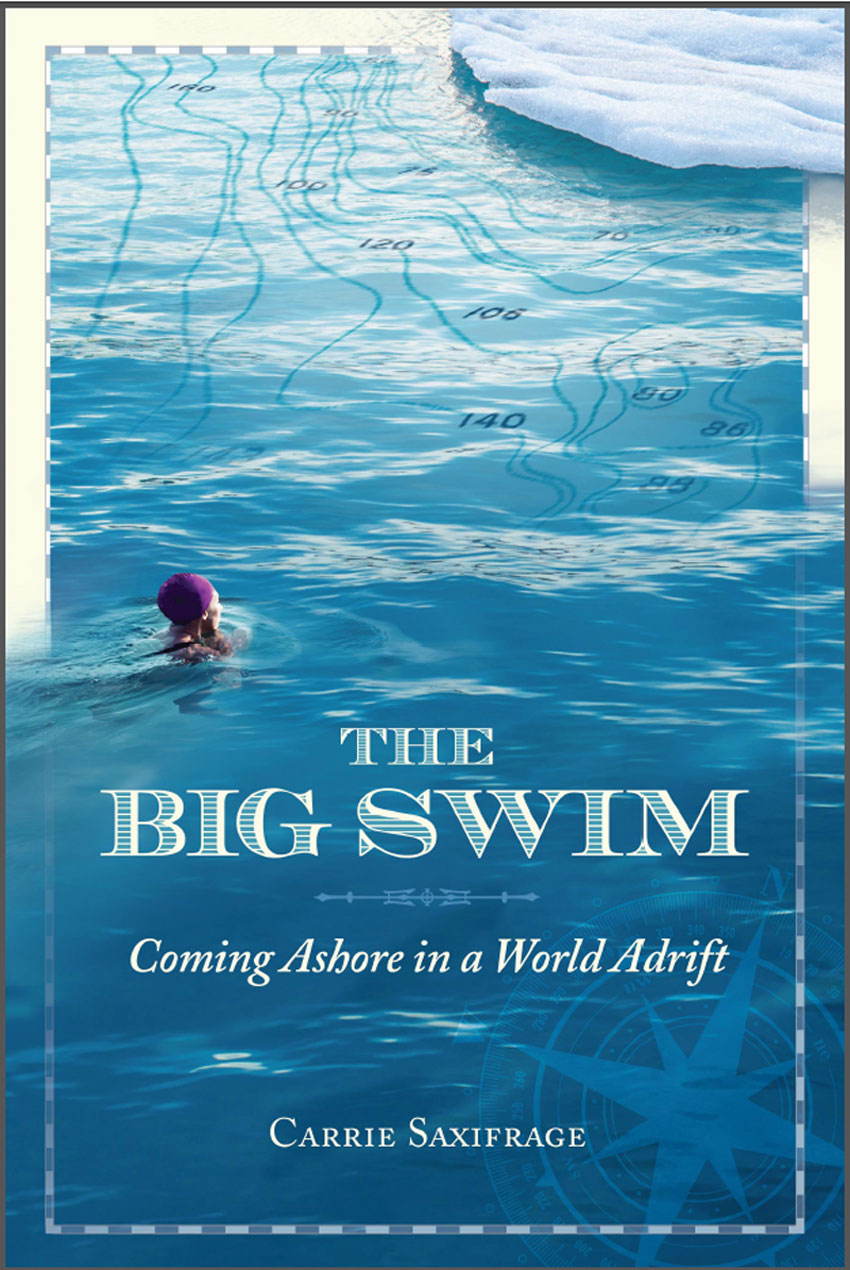