Program 3 brings Ballet BC season to a rousing conclusion

But, by the second intermission, experienced veteran Ballet BC subscribers knew better than to linger in the QE foyer. Their 2017 experience would have taught them to look out for primo dancer Scott Fowler quietly sauntering out in front of the proscenium while the houselights are still up. He’s dressed unassumingly in just the sort of white shirt/black suite ensemble that you might see on an errant ballet-goer who’d somehow stumbled onstage after one too many lobby bar cocktails. 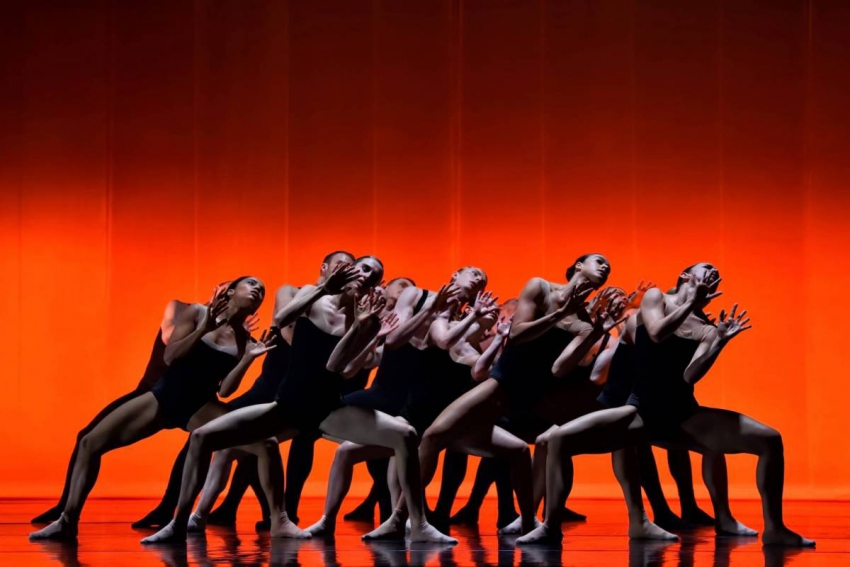 Yet, to an almost subliminal score of low-keyed Latino music he starts executing a sequence of soft shoe steps that are somehow a tad too witty, loose-limbed and elegant to be mere accidents of a befuddled audience member. And, presently, he’s joined by some 16 other Ballet BC compeers (the company’s dozen core dancers plus five “emerging artists”), all identically togged and frisking about in similarly witty, loose-limbed moves.

At this stage, we’ve all been lured back into our seats. The houselights are doused and the music abruptly punches into a medley of Israeli stridency. First a dizzy hora whirl of Hava Nagila, followed by the iconic post prandial rouse of the Passover Hagaddah, Echad Mi Yodea.

As a Bar Mitzvah survivor, I remember this piece as an innocent little counting game, its lyric crammed with numbered sets of obscure Judaica but mainly designed to din into us the Hebrew numerals – a bit like a Jewish version of the Twelve Days of Christmas. As rendered, though, by the trailblazing Israeli rock band Tractor’s Revenge, the sing-song mnemonic morphs into an aggressively pulsing anthem.

And Naharin seizes upon its momentum, arraying his dancers across a wide arc of folding chairs upon which the alternately arch in stress, brace in seeming rage, whirl (in ecstasy?) or sink in exhaustion, all at an accelerating pace as the musical strophes lengthen with each agglutinative round. In each cycle, one honcho dancer leaps onto his chair to domineer the others, while the last dancer in the line repeatedly flops face-first onto the stage as though shot dead.

When I saw this in 2017, it struck me as exhilaratingly helter-skelter. This time, the recursive violence seemed almost enervating. I’m not sure whether the choreography was somehow subtly tweaked or it’s just the anomie of déjà vu or maybe the altered context of Israel and the world in the intervening years. But this new reaction gave the work an extra gravitas for me.

Naharin and be back for the concluding program of the upcoming season with the North American premiere of his 2009 work Hora to a synthesized score by Japanese electronic music pioneer Isao Tomita. Eyal will also be featured in next year’s Program 3 with a reprise of Bill, which Ballet BC brought to the QE stage for its Canadian premiere in 2016.

A new Canadian premiere in the 2019-2020 season will bring Edmonton-born choreographer Aszure Barton’s 2009 work BUSK to the QE for its first rendition in her native country in November. She’ll share the Program 1 bill with a reprise of Johan Inger’s B.R.I.S.A., which enjoyed its North American premiere here in 2017. And the whole of Program 2, in March of next year, will be given over to another reprise, for French choreographer Medhi Walerski’s new setting of Prokofiev’s Romeo and Juliet, which saw its world premiere at Ballet BC in 2018.

Plus, of course, at year end The Nutcracker. There will always be a Nutcracker.