When the Cheating Ex-Husband Resurfaces with Romance in His Eyes: Quel Horreur!

Meryl Streep and Alec Baldwin as the divorced couple exploring a new romance---with each other--- in It's Complicated.

Like many people all over the world, my life was once complicated too, but not always in the way I would have liked.  And as a divorce survivor, I had a personal reaction to It’s Complicated.   Stomach cramps and dizziness ensued and I came close to puking in the theatre, but not because the movie wasn’t beautifully shot, brilliantly cast, or exceedingly well-acted.  It’s just that I can’t imagine a fate worse than having an affair with my ex-husband.  I kept trying to figure out how Jane (Meryl Streep) could do it.  Well, it had been ten years – maybe she had become a little forgetful and just couldn’t remember the lies.  Or of how she had had to do all the work with the kids, being fulltime nanny to the kids and her husband, Jake (Alec Baldwin), while he flitted about the place having affairs.  Maybe Jane wanted to show off her gorgeous home, that she was about to renovate and make even more gorgeous, quietly letting Jake know how much money she was raking in at her fabulous bakery business.  Okay, I can see that.  Maybe Jane wanted flaunt the fact that she had so left the past behind that now she was able to leap into the sac with anyone she pleased, including Jake, without it costing her a single emotion, la-de-da.  That could be it.  Maybe she was searching for something to remind her why she had ever loved him in the first place.

Admittedly, Jake was cute as bug.  You could tell by the twinkle in his eye that he was up to mischief and that you couldn’t trust him as far as you could throw him.  He was such bad news, that I found myself thinking, oh no not him again but then couldn’t wait to see what he was going to do this time.  Adam (Steve Martin) was also cute as a bug but in a different way.  He was the perfect shy guy, the behind the scenes architect who read all the notes and did all the work, who understood Jane (Meryl Streep) better perhaps than any man ever had.  The late night scene in the bakery when Jane and Adam sneak in to make and eat chocolate croissants together seemed to me be one of the most romantic scenes in cinema.  Eating croissants was an innocent pleasure, whimsical and childlike, straight from the heart.

Of course, the movie really belonged to Meryl Streep, the world-proclaimed high priestess of cinema, capable of bringing life and depth to any character.  I was fascinated by Jane.  She seemed so happy.  Is this the reward after ten years of divorce?  No matter what happens, you can laugh it off with a shrug? Her insecurities, the one sagging eyelid, not wanting to been seen naked standing up, were minor in comparison to her strengths as a business woman, as a mother, as a friend.  That’s where Nancy Myers comes in.  Her vision as a writer and director is much more than a creator of relationship comedy.  She draws characters, both women and men, who can pull themselves together and carry on, sometimes finding love along the way. 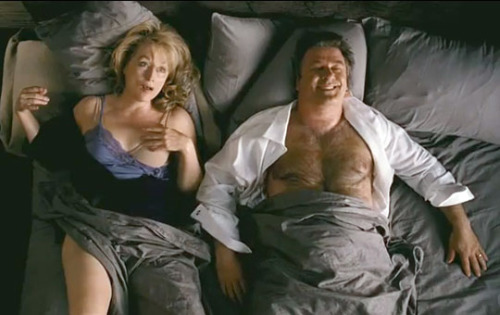