What a ride — at least if you're Daenerys Targaryen. What about those left behind? Time for some Game of Thrones season-finale speculation. 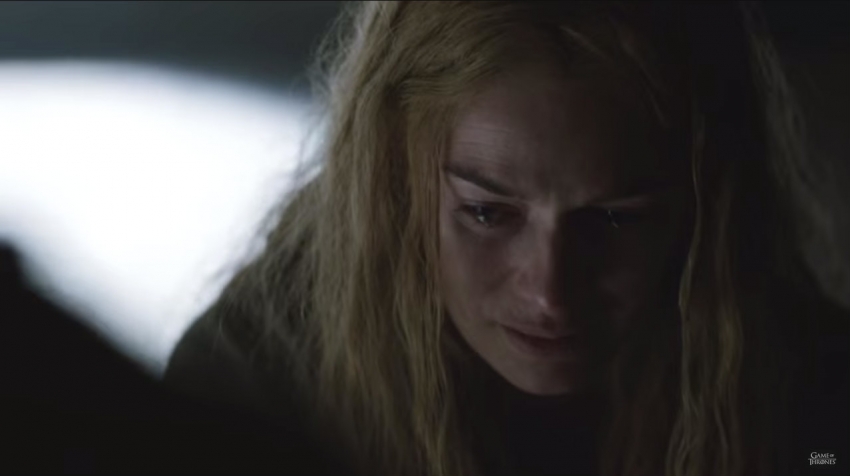 “I’d rather be day-drinking”: Cersei Lannister faces a grim future in Game of Thrones S05E10.

Hey, Dire Wolf fans! You got plans for Sunday night? Let's check out HBO's preview of Game of Thrones S05E10, "Mother's Mercy". Check out the video, then let's pick it apart...

Breaking up the band

We see a figure standing alone on a cliff overlooking a lush (dare I say fantastical?) landscape. We then see Tyrion Lannister, Ser Jorah Mormont, and Daario the Lothario sitting aournd in the throne room of Mereen, looking... bummed? Disheartened? 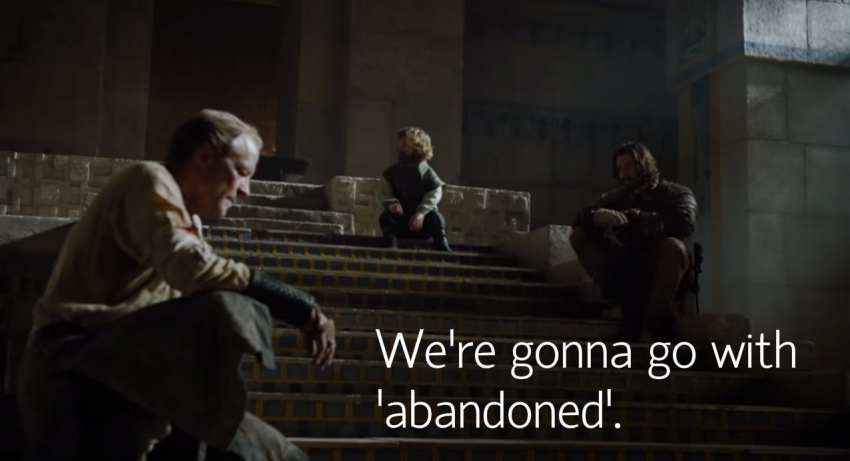 Thanks, Jorah: abandoned. Because Khaleesi Neverending Story'd the f^ck outta town, leaving advisors, lovers, and would-be advisor/lovers in the dust (and among the knives). Uncool.

We see Jon Snow looking pensive. For a guy who knows nothing, he spends a lot of time... considering stuff.

We also see Cersei Lannister looking even more broken than the last time we saw her. I hate Cersei, you hate Cersei, we all hate Cersei... but we all kind of love her, too, because she's such an awesome character. So Jaime Lannister's voiceover, "We don't choose who we love" –– echoing something he said to Brienne of Tarth a few seasons ago and something Ellaria Sand in turn said to him about 10 minutes ago –– suggests maybe his relationship is about to go even more public than it already is. I'm predicting a bad time for Cersei in S05E10, but I don't reckon she'll die.

The price of melting the ice

We see Stannis Baratheon and Team Sexy Witch Religious Fundamentalism at the Gates of Winterfell, ready to lay siege. The weather is turning: Melisandre's magic has brought about an unnatural thaw; but, as we all know... 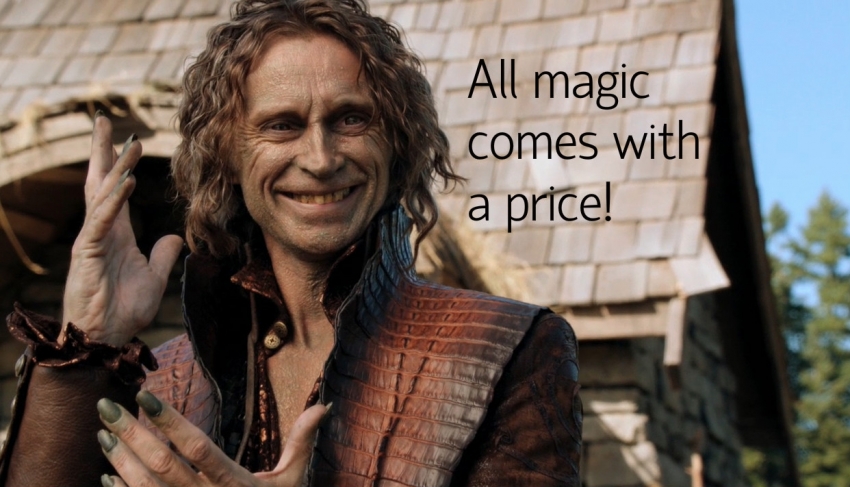 That price was Shireen Baratheon’s life. I seriously hope that TSWRF got more than climate change for burning a little girl at the stake.

I reckon Shireen should come back as an avenging shadow-assassin, dealing swift death to the Boltons, who would be powerless to harm her ethereal form, and horrified to look upon her. Psycho Hobbit would be like, "This is even scarier than The Ring!" 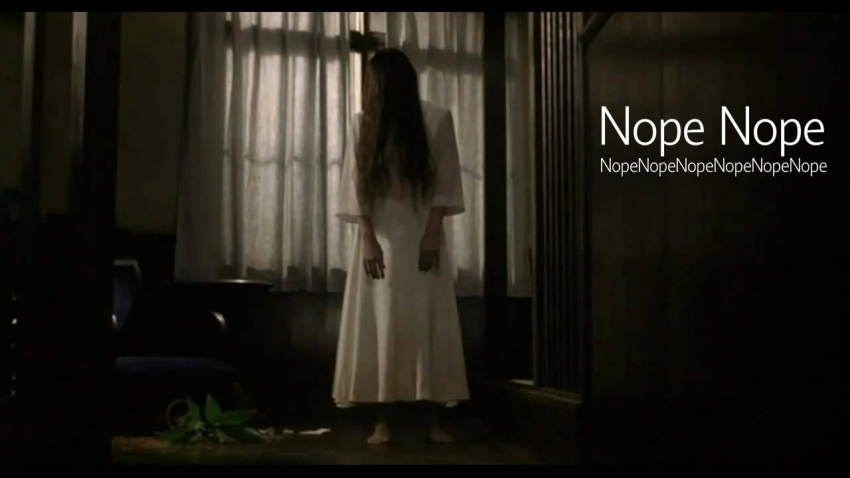 Brienne of Tarth would be looking on, horrified and fascinated at seeing what looked so much like the Dementor that killed Renly.

Then, once Winterfell has fallen, Shireen looks back at her father and smiles that angelic smile, that echo of a child's love for her dad... before vanishing forever.

That smile would haunt Stannis for the rest of his life, however long that may be. 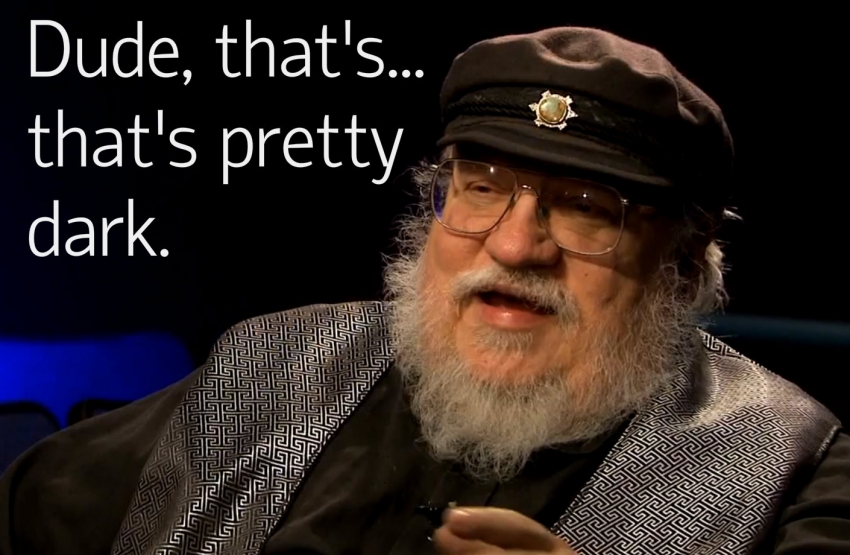 At any rate, every Dire Wolf Fan now must choose who they'd rather have in control of the North:

And do we even know how Melisandre got her powers? Was she born with them? Is it something you study? Are there different paths to controlling... whatever it is people like Melisandre and Thoros of Myr control? 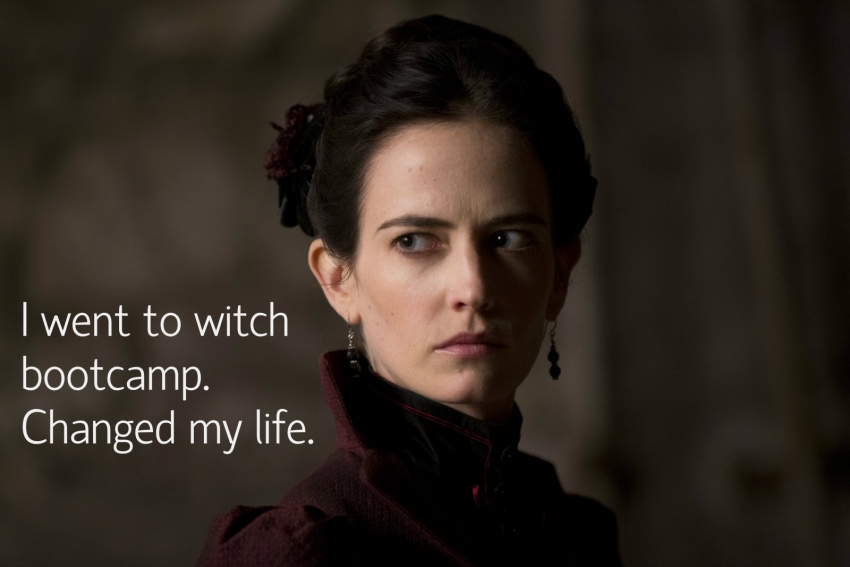 Arya Stark is in the Hall of Faces (that's just what I'm gonna call that place, because "Crevasse of Visages" just sounds dumb), maybe getting ready to mask up and light Meryn Trant's ass up.

Meanwhile, Sansa Stark has her hoodie up, declaring, "If I am going to die, let it happen while there's still some of me left!" We See Brienne of Tarth and Podrick Payne rocking up, looking shocked. Which is to be expected, because a lot of shocking stuff has been going on in and around Winterfell.

Wouldn't it be weird if, after everything Stannis (and Shireen!) sacrificed, Brienne of Tarth ended up being the catalyst for the Boltons' defeat?

What will happen in Game of Thrones S05E10?

A lot of book-readers have been talking (sometimes a bit too loudly) about a major plot development that is almost guaranteed to happen on Sunday. If you know what it is, please keep it to yourself.

I think that Tyrion, Jorah, Daario, and Melisandre (along with Grey Worm) will keep Team Dragon Mama going in Daenerys' absence, however long that may last.

I don't think that the Boltons can hold out against a will as terrible as Stannis Baratheon's. You know, these Bolton fellas are yet to be truly tested. The Red Wedding was an ambush, and Yara Greyjoy's let's-rescue-Theon mission failed when they were chased off by a bunch of dogs. All Psycho Hobbit really proved in that scene was that he's more ripped than we'd have guessed.

My prediction: between Melisandre's magic, Stannis' Stalinesque will to win, and Brienne of Tarth's mission to protect Sansa Stark, Roose Bolton and Psycho Hobbit are screwed.

I really hope Sansa isn't killed in all of this. However, if she survives, I can't help but fear that she'll land in even worse trouble.

See you Sunday, June 14, for the Game of Thrones S05 finale.