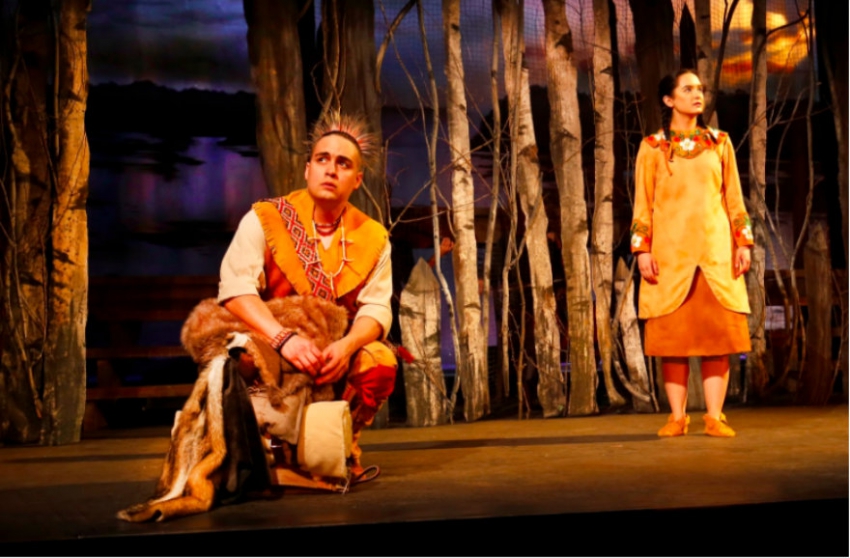 It was a busy week for Vancouver based Oji-Cree artist Corey Payette.

His latest musical, Les Filles du Roi, opened at the York Theatre on Commercial drive and he accepted the Canada Council John Hirsch prize for his direction of last year’s Children of God, which he also wrote.

Payette gives a presentation on Manitoulin Island in Ontario, as part of The Cycle, a national conversation on Indigenous Theatre. Photo by Mique'l Dangeli

What started as a passion for music quickly translated into performing, then further morphed into composing and musical directing, culminating in his newest reincarnation as a director and writer for his first musical, Children of God.

“That was a show that really felt like it was one that I needed to write,” said Payette over the phone, while on his way to work on his next project, a new musical for Bard on the Beach. “I needed to write the story, it needed to be coming through my voice.”

Children of God, which had its world premiere at the York theatre in 2017, told the story of the children of an Oji-Cree family being sent to a residential school in Northern Ontario.

He quickly followed that show up with Les Filles du Roi. The tri-lingual musical, performed in French, English, and Kanien’kéha, was co-created with Julie McIsaac. It transports the audience back to 1665 when King Louis XIV of France sent “les filles du roi” to nouveau France - in Canada - to help populate the colony and how their arrival affected the Mohawk nation living nearby.

“A lot of people have never heard the stories. They don't know some of these histories, especially when we're looking so far back,” explained Payette. “It acts as a reminder of what once was. And once you have that perspective, you can't really go back to pretending like you didn't know it in the first place.”

The multi-talented creator believes that’s the power of musical theatre; it can shift the way its audience sees the world.

For Payette, that’s never more present than when he sees the theatre’s seats filled by students on field trips.

“That is going to shift that generation, said Payette passionately. “Because they won't grow up in a world that I grew up in where these stories were silent and these histories weren't properly understood.”

Payette only recently discovered that his great-grandmother spoke Kanien’kéha (the Mohawk dialect Payette was writing in for his musical) as her first language, along with French and English.

“She never passed that onto her children because of the racist environment to grow up in as an Indigenous person in Northern Ontario."

The ensemble of Les Filles du Roi on the York Theatre stage. Photo By Tim Matheson

As Payette began to write these new works, the research took him on a journey of self-discovery.

“I didn't grow up on the reserve. I didn't grow up being proud of my culture,” said Payette.  “I come from generations of Indigenous people who were being discriminated against for their background.”