Love and death intertwine in Blackbird Theatre's "The Rivals" 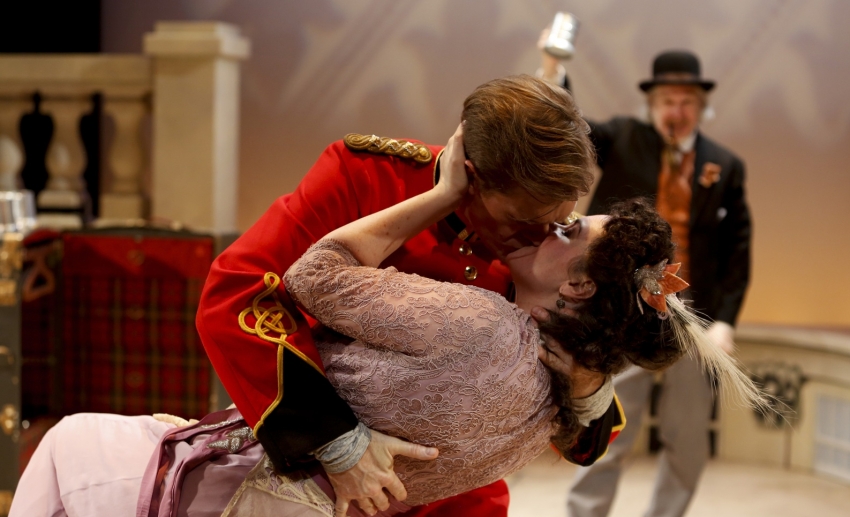 Captain Jack and Lydia in a clinch as Lucius looks on in chagrin. Photo by Blackbird Theatre

In its impeccable casting, pacing and stage blocking, Blackbird Theatre’s new rendition of “The Rivals” is an exquisite wind-up toy of a show – ideal for the jewel box setting of The Cultch’s intimate 200-seat Old Theatre.  With some deft edits, director Johnna Wright turns the mannered diction of 18th century Restoration Comedy into a witty dissection of our most contemporary foibles and neuroses, all without sacrificing the airy grace of Richard Brinsley Sheridan’s 1775 script.

The perfect clockwork of Wright’s production reflects the intricate gearing of Sheridan’s plot. Except for a pair of servants, all the characters are privileged one-percenters, speculatively eyeing each other in the marriage market of a fashionable English spa town. With hefty annuities at stake, the young eligibles are fiercely guarded by overbearing elders.

But who, at age twenty-something, would willingly be brokered off as marriageable merchandise? Not solipsistic Squire Faulkland, who compulsively quizzes the devotion of Julia, the adored (and adoring) fiancée to whom he’s already pledged in an arranged marriage. Nor would Julia’s cousin, pert Lydia Languish, meekly “go simpering up to the altar” of sanctioned matrimony; she’s read enough romance novels to know that true love must always entail a forbidden elopement and a foregone dowry.

So, instead of frontally wooing Lydia (and her ample fortune), the rich and soldierly handsome Captain Jack Absolute mounts a flanking attack. He plays up to her starry-eyed whimsies by posing as an impoverished noncom who only longs to spirit the young heiress away from her guardian aunt, Mrs. Malaprop, for a life of genteel poverty.

The aunt vows to sever Lydia from her noncom and deliver her into a stodgy alliance with Bob Acres, a social-climbing bumpkin of a country squire. Yet at the same time Widow Malaprop, for her own part, is exchanging pseudonymously flirtatious love notes with one Lucius O’Trigger, a down-at-the heels exile. And he, in turn, presumes his flowery pen pal is the buxom niece rather than her haggard guardian.

Mrs Malaprop speechless (for once) at Sir Anthony's proposition. Photo by Blackbird Theatre.

Things come to a head when Sir Anthony, Jack’s crusty old plutocrat father, offers his son, the dashing young Captain Absolute himself, as a suitable match for Lydia. This leaves Jack on the spot. With his dual-identity exposed and his courtship stripped of its illicit allure, Lydia spurns him scornfully.

Yet his two supposed “rivals” for her affection – Acres and O’Trigger – remain unapeased. They each challenge him to a duel-to-the-death. Faulkland, tapped as Jack’s dueling “second,” uses the occasion to try Julia’s devotion one more time, whereupon he, too, winds up ditched by his own long-suffering inamorata. The duel itself turns out to be a farcical fizzle. But the whiff of mortal danger proves enough to bring both young couples and the popinjay “rivals” to their senses for a finale of happy reconciliation.

There’s plenty of room here for slapstick, but the funniest bits in “The Rivals” – the courtly compliments, bombastic tirades, soliloquy asides, coy mash notes, bantering volleys and sly put-downs – all depend less on action than on language. And not just quotidian English, either, but Sheridan’s ornate 18th century persiflage. To bring it off requires a special sort of classically trained cast. So Wright has recruited from the A-list of Canada’s repertory theatre – notably Vancouver’s own Bard on the Beach – as well as from the international screen.

Heading the roster is Gabrielle Rose. As Mrs. Malaprop, she convincingly melds the grim duenna and the closet coquette. The noun Malapropism has by now become a dictionary eponym for what Sheridan termed “select words … ingeniously misapplied without being mispronounced.” Rose never lingers over her inadvertent puns, fluently purling and growling her gibberish until it almost seems to make some sort of wacky sense.

In a lesser troupe such a tour de force might be a show-stealer, but in the Blackbird’s “Rivals” the co-stars more than hold their own. John Emmet Tracy stands out as Faulkland, the hesitating prince – less a Hamlet than a Prufrock, right down to his centre-parted hair. Luisa Jojic, his Julia, bears the fardels of Faulkland’s contumely with stoic grace. As the insolently opportunistic Jack, Martin Happer conveys a sense of blithe vacuity tricked out in gold braid and epaulets. Emma Slipp’s Lydia is a statuesque beauty, striking poses as much for her own beguilement as for her serried male admirers. Sir Anthony, in Duncan Fraser’s portrayal, can be as lethally supple as a silken garrote or as blunt as a blackjack.

Amidst all these toffs, Jenny Wasko-Paterson shifts costumes and genders to stand in for the whole rest of humanity, the servile underlings. She sows confusion first as a venal parlor maid and then as a lily-livered butler, all while maintaining a thick Irish brogue. The role of O’Trigger, too, was originally Irish, a stereotypically hot-tempered Hibernian, but Scott Bellis instead plays him here with a Dixie twang as a dispossessed plantation grandee. That’s in line with Wright’s decision to recast Sheridan’s 18th century script into the Gilded Age of the early 1900’s – long enough ago to account for the mannered speech, but contemporary enough for us to better decode the class cues of the costumes and trappings.

As an anniversary offering, this production strikes an uncharacteristically lightsome note for a troupe that, in its first 10 years, has treated us to the likes of Pinter, Ibsen, Beckett, Chekhov and Euripides. But in “The Rivals,” Wright shows off The Blackbird's comedic versatility – a Malapropitious launch for its next decade of bringing classic theatre to the Vancouver stage.