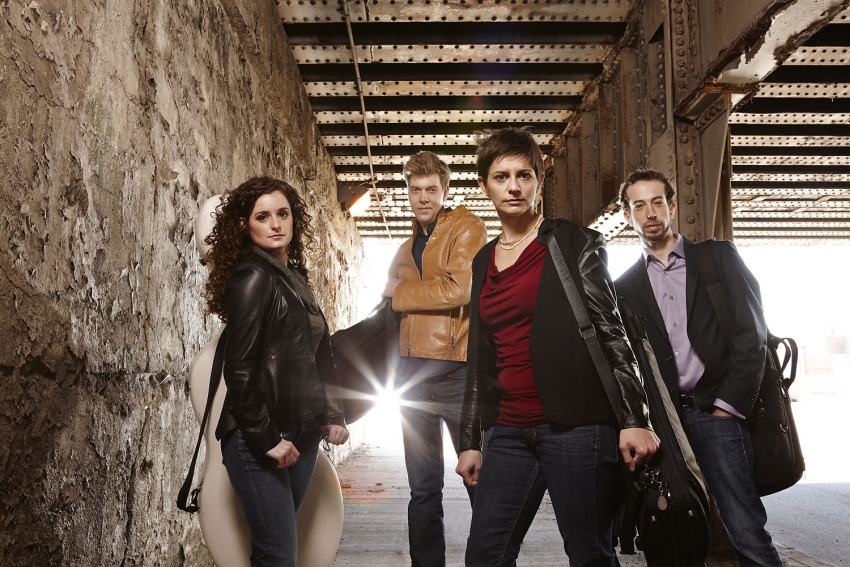 “Fortune brings in some boats that are not steered.”

So said William Shakespeare, inventor of the sprite Ariel, namesake of the heroic Cincinnati-based string quartet that flew into town on just a day’s notice to save our local Friends of Chamber Music (FOCM) society from a scheduling disaster.

The ensemble’s stellar, if unexpected, Vancouver debut proved to be a stroke of over-the-transom good fortune that we’d do well to celebrate with future engagements. Pinch hitting with works by Mozart, Mendelssohn and a new piece by Pulitzer Prize-winner John Harbison, the Ariel Quartet performed so with such verve as to deserve a recurrent place on the FOCM seasonal roster.

Too late for that in the 2019-2020 series, whose 10-concert schedule was announced last night.  Once again, Takács Quartet highlights the list, along with the Auryn, Bennewitz and Pavel Haas Quartets and the Chamber Music Society of Lincoln Centre (twice).

No slot for Ariel in the upcoming season, but neither was there for the Julliard String Quartet, whose last-minute cancellation fortuitously brought us the Cincinnati group.

And, anyway, Ariel likely has many years ahead to regale us, as they all appear to be spry young Gen Y hipsters. Between the four of them, they might have logged in barely half the age of the 18th century instruments played by first violinist Alexandra Kazovsky or second violinist Gershon Gerchikov. (Let’s not even talk about the 30 or so millennia cumulatively represented by FOCM’s near capacity Vancouver Playhouse crowd last night, assuming – just on eyeball evidence – an average age around 65).

Underscoring the generation gap between audience and performers, the remaining two members of the quartet, cellist Amit Even-Tov and viola Jan Grüning, are Young Marrieds and new parents. Their 14-month-old daughter joined them on their Vancouver rescue mission, braving the Boeing-challenged snarl of North America’s Spring Break air traffic and sitting out the concert with a rent-a-nanny in the backstage Green Room.

Youthful as it is, Ariel is still polished and impeccably melded beyond its years. After all, Kazovsky, Gerchikov and Even-Tov have been playing together since their early teens, first in their native Israel and then at the New England Conservatory of Music. Grüning married into this musical ‘family’ in 2011, at about the same time that the group took up its current Faculty Quartet-in-Residence status at the University of Cincinnati’s College-Conservatory.

Securely tenured, Ariel was able to jointly commission Harbison’s Quartet Number 6 in 2016. For all its modern tonalities, the work is a tribute to the earliest 18th century origins of the classical string quartet. The form as we know it was evolved (largely by Haydn) from an improvisatory light entertainment by a liveried court concertmaster backed by a freelance “pick-up” violin-viola-cello trio.

Movement 2 lives up to its title, canto sospeso (“suspended song”), with snatches of melody taken up, bandied about the quartet, left hanging and then faintly reprised. Even more tentative is the ensuing soggetti cavati (“exhumed subjects”), an almost archaeological dredging of thematic fragments that hint at some enigmatic whole.

Only in the final movement, “provisional conclusions,” do the four musicians come together as a cohesive ensemble, with Kazovsky cutting acrobatic figures against a driving ensemble backdrop. Gerchikov, Gruning and Even-Tov egg her on with slashing downbow chords, climaxing in a final fake-out slash which turns out to be pure, soundless gesticulation.

Kinetic gesture is the propulsive fuel of conductorless chamber music. It’s how the musicians wordlessly convey their intentions to one another and how they draw us into their momentum. Having spent over half their young lives together as a quartet, the Ariel players are masters at this sort of signaling.

It’s a joy to watch their vigour – at times almost vehemence – “leaning into” Mozart’s F major Quartet, K590. And their dreamy, eyes-half-shut surrender to the lushness of Mendelssohn’s Quartet in D major, Opus 44 Number 1.

Having seen what they can do with such monuments of the classical and romantic repertoires, respectively, let’s hope we can look forward to finding out – on their next Vancouver visit, perhaps? – how they’d handle Beethoven, the bridge between the two eras. Ariel has set itself the project of recording the entire Beethoven quartet cycle by 2020.

This week Half Moon Run played Vancouver's Queen Elizabeth Theatre. Many were unsure whether the Vancouver fans would brave the unusually cold and snowy conditions but I was pleasantly surprised to...
Craig FleischJan 17th, 2020

Benjamin Bagby and Sequentia bring medieval spells, songs and stories to EMV
Lincoln KayeJan 9th, 2020
Speak up about this article on Facebook or Twitter. Do this by liking Vancouver Observer on Facebook or following us @Vanobserver on Twitter. We'd love to hear from you.