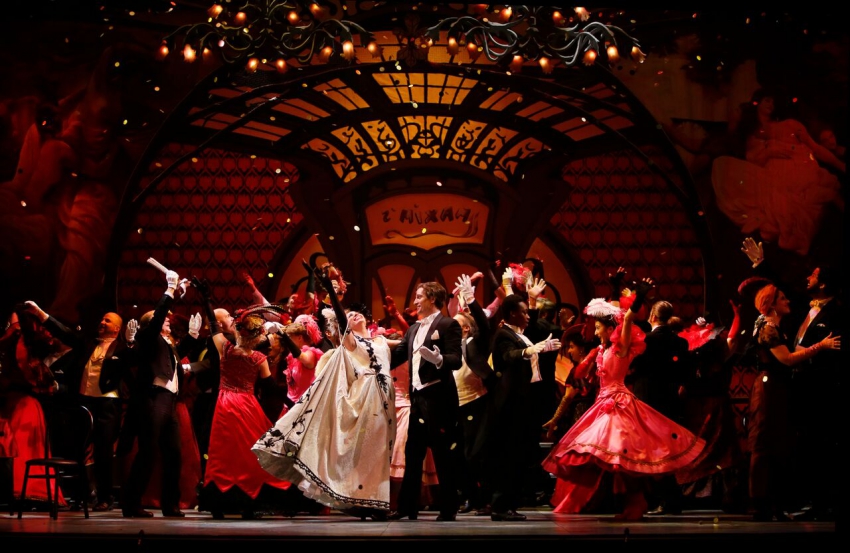 “Marriage is a dinner that begins with dessert.” So said Henri Toulouse-Lautrec, the definitive Belle Époque artist, boulevardier, bon vivant and gastronome.

Vancouver Opera (V.O.) has adopted Lautrec’s principle of menu-planning, leading its 2018-2019 line up with a rich Viennese torte, Franz Lehàr’s 1905 operetta, The Merry Widow. The hope, perhaps, is to entice patrons into the “marriage” of a season subscription (with later courses to include such relatively robust fare as La Bohème, Faust and La Cenerentola).

Lautrec’s artwork – specifically his nightclub posters – is recognizably quoted in the eye-candy of this Merry Widow production, replete with sumptuous gowns, pompous uniforms, dashing frock coats and Art Deco curlicues. All these bonbons came in a box from – of all places – Salt Lake City, on loan from the Utah Opera.

When it comes to marriage, though, starting out with the “dessert” of a passionate fling can be risky. If you prematurely overeat, you might never get around to the main course.  That’s what happened to The Merry Widow’s title character, Hanna (soprano Lucia Cesaroni), a Balkan peasant beauty, and her high-born paramour, Count Danilo (tenor John Cudia), back in their quaint-but-bankrupt little homeland, Pontevedria.

When his aristocratic family nixed their union, she rebounded to wed a super-rich Pontevedrian expat in Gay Paree. The old moneybags promptly died, bequeathing to his widow vast estates that account for half the kingdom’s tax revenues. How merry!

With eligible French fortune-hunters swarming around her, the Pontevedrian ambassador, Baron Mirko (baritone Richard Stuart) must urgently marry off Hanna to a countrymen of her own to keep the national treasury afloat. There’s only one man up to the task: Count Danilo, who has embedded himself in the embassy as a slacker attaché the better to drown his chagrin d’amour in the louche Paris nightlife.

Both the Count and the Widow fervently long to proceed from “dessert” and resume their stalled romance where they left off. But pride blocks them: he’s allergic to any imputation of marrying for money and she’ll have no part of him until he explicitly declares “I love you.” So how to get to “Yes?” The whole three-act, 130-minute script details their tortuous path.

All this, of course, goes on in a sunnier era when one could walk into a diplomatic mission on matrimonial business and reasonably expect to come out alive. Still, the Pontevedrian embassy has intrigues of its own, mainly about a dalliance between the ambassador’s prim but lusty wife (soprano Sasha Djihanian) and her French toy boy (tenor John Tessier). Things get further complicated thanks to the bumbling attentions of an overeager major domo (Vancouver soprano Sarah Afful).

Never mind the plot details. They make no sense, anyway, and exist mainly as a vehicle for Lehàr’s iconic waltzes, mazurkas, can-cans and ballades. Choreographer Joshua Beamish pulls out the stops for a couple of wholly extraneous but utterly charming kazatsky ensemble pieces, not to mention his ebullient kick-lines where at least a third of the frilly grisettes are actually males in campy drag. He has so much fun with this that, when he runs out of Lehàr can-cans, he borrows one from Offenbach.

With all these moving parts, V.O. has turned to its veteran director Kelly Robinson (last seen here bringing Evita to the QE stage in 2016) to keep everything on track. He’s greatly helped by Rochester Philharmonic conductor Ward Stare, an opera specialist, making his V.O. debut fresh after conducting the same score at New York’s Met. Stare brings such energy to the podium that even the audience claps along with his can-can and the musicians themselves join in his ovation, the string players waving their bows in the air above the orchestra pit.

But in an iconic show like Merry Widow it’s ultimately the star players who have to distinguish this performance from your run-of-the-mill humdrum rendition. And, since it’s an operetta with as much spoken dialogue (in English) as sung arias (in surtitled German), the stars need to be equally accomplished as actors and vocalists.

The current V.O. cast more than rises to the occasion. Stuart, no stranger to the role of the Baron in several worldwide Merry Widow engagements, is an operetta veteran with a lot of Gilbert and Sullivan under his (rather ample) belt. Afful is a comic up-and-comer to watch, here making her opera debut after impressive pan-Canada experience on the dramatic stage.

Djihanian and Tessier present a plausible pair of philanderers, complimenting each other both in their fruity vocal styles and in their flirtatious co-dependency. Cudia sings Danilo with panache in his solos and duets, although his vocal crispness occasionally risks getting swamped in an ampler choral or orchestral setting. As an actor, he shows plenty of wit and flair (despite an eerie physical resemblance to Jared Kushner). And, crucially for this role, he has credible chemistry with his opposite number, Hanna.

But it's Cesaroni who is the unquestionable cynosure of the whole show. She's almost continuously onstage, front and centre, with the whole gaudy cast and scenography revolving about her. Amazingly enough she even manages somehow to revolve about herself, coquettishly swivelling her svelte form in places where the rest of us aren’t even jointed.

She can dance apace with the chorus line pro’s, cut coloratura shines and then turn around and invest an old chestnut like Lehàr’s Vilja ballade with genuine feeling. No wonder the Count succumbs in the end. Starting with a dessert like that, how could he – or we – resist the Merry Widow’s full-course menu?