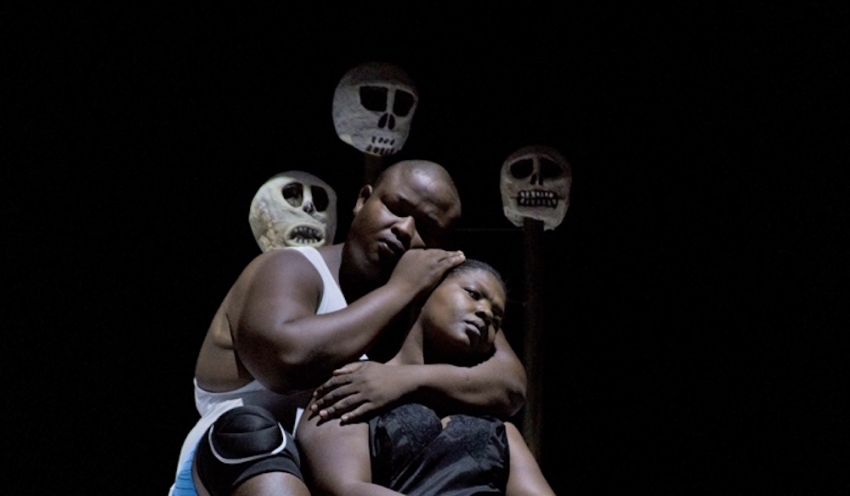 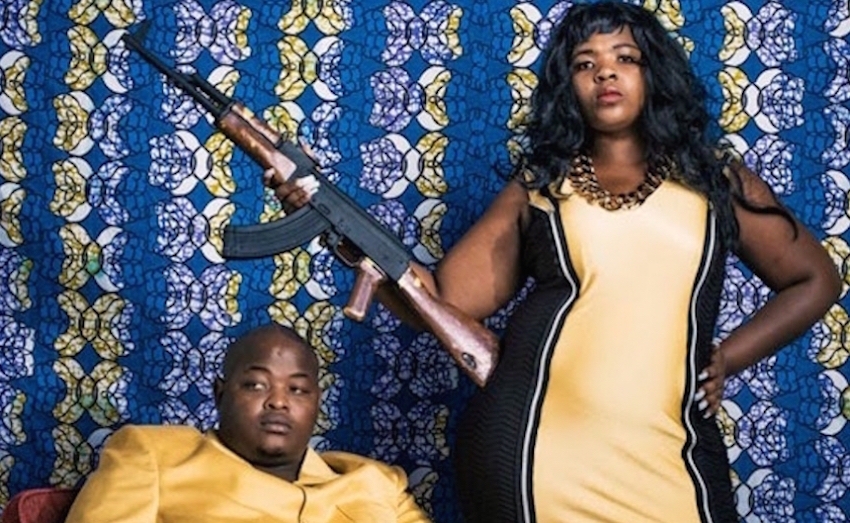 That’s not something that comes naturally to the devoted subscribers of Vancouver Opera (the V.O. which, together with the PuSh Fest and the Italian Cultural Centre, co-sponsored this Canadian debut). Normally opera buffs – more like sports fans than symphony audiences – cheer each tour de force as it comes.

Nor is there any shortage of moments to cheer in this Macbeth. The all-black, 10-member touring troupe – trained almost entirely in South Africa – sings at the highest international standard, with acting and dancing to match. Bravura stand-out performances from all three leads: Owen Metsileng in the title role, Nobulumko Mngxekeza as his Lady, and Otto Maidi as Banquo.

But it quickly becomes apparent to even the most die-hard V.O. aficionados that this performance is hardly classic opera in any conventional sense. More like a mash-up of genres, including installation art, oratorio, grisly newsreel and potty-mouth comic strip.

The score is Verdi, sure enough, but trimmed into graphic novelesqe mini-scenes strung together to run for a continuous 100 minutes, without intermission. Shakespeare’s eerily tragic “Scottish Play”(as its name is still euphemized by superstitious thespians) is transposed to a modern-day backdrop of internecine Congolese genocide and neo-colonial exploitation.

The players sing the original Italian libretto, but it’s very freely translated into surtitles that mirror the blunt crudity of the latter-day setting. So, hearing the witches’ initial prophesies, Macbeth’s awed “Accenti arcani!” comes out as “Weird shit!” Or, after his meteorically unexpected rise as Commander-in-Chief, we have him promising his subjects to “Make Congo great again.” And, when it all unravels, the surtitle echoes Conrad, not Shakespeare: “The horror! The horror!”

Even more boldly revisionist is director Bill Bailey’s staging. The orchestra, which includes a smattering of exotic African idiophones, is pared down to a just a dozen borrowed V.O. musicians under the baton of Bunfight’s customary conductor, Premil Petrović. The instrumentalists are crammed into one corner of the stage; in the other corner sit the 10 choristers, waiting "on deck" in between their cameo supporting role appearances.

That leaves just a raised pie-wedge platform, its apex aimed straight at the audience, for the main action. The crisp, out-thrust right angle calls to mind the panel frame of a comic – all the more so as lighting designer Felice Ross has decided to daub platform’s edges in a shifting palette of neon hues. She backs up the stage with a cyclorama that scrolls a sequence of lurid cartoons, African fabric motifs, stark black-and-white war photos and bleakly matter-of-fact newswire dispatches.

The abridged score (by Belgian composer Fabrizio Cassol) sharpens the contrasts by compression. Dance further heighten the incongruities. Choreographer Natalie Fisher has Banquo, for instance, literally waltzing to his doom. And Mngxekeza makes a most seductive mass murderess, at once buxom and slinky. “She moved in circles, and those circles moved.”

Bailey keeps her dressed to kill, with costumes escalating from washerwoman drab to bling-festooned camo to a tricot sheath, slithery wig and blood red gloves. And then he strips her back down to a plain, black shift for her “out, damned spot” death scene.

Metsileng’s shoulders brace – and then sag – under grandiose epaulettes. His crowning fez, in the shape of a clenched fist, rears – at first – in defiance, but bows his neck at last. by the time he's ready to turn, in desperation, back to the witches for guidance, he’s dressed in just a singlet and beret (accessorized, of course, by his ever-ready AK-47).

About those witches: they’re compound characters, in this staging. Their guiding demons are a trio of faceless corporate moguls in white gas masks, hard hats and necktie bibs. They duplicitously drive the action solely to amass their heaps of precious “conflict minerals.” But they never speak direcrtly; their oracular pronouncements (as well as their multi-lingual “foreign direct investment” sales pitches) are coerced at knifepoint out of the mouths of cowed Congolese villagers.

And those same villagers are the ones left to mourn silently, folding and smoothing the rent garments of their murdered children downstage centre as the cyclorama unfolds scene after scene of civil war hellscape and ongoing eco-rape. In the end, though, the villagers find their voice again in the final choral dirge as the Macbeths, Mister and Missus, spraddle dead on the dais.

One presumes the choristers are not mourning the royal couple per se, but rather the endless hurt of flawed humanity. The music at this point is pure Verdi, poignant beyond words. For once the surtitles blank out, sparing us any ironic meta-translation.

And finally the audience remembers to clap again, for a thunderous, prolonged standing ovation.