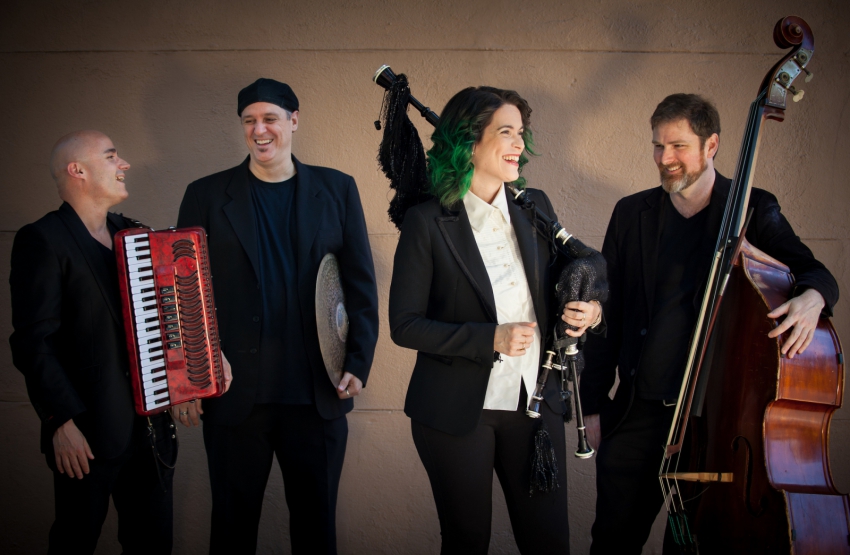 It may be made of some hi-tech space fabric nowadays, but the bagpipe still bears the stamp of its ancient origin as a shepherd’s instrument. It looks like a goatskin, with pipes – drones, fingerboard ‘chanter’ and blowtube – affixed in lieu of the head and legs. And glorious fringes (denoting the tail?) that doff in tune with the prancing piper.

Cristina Pato, from Galicia in the pastoral Northwest corner of Spain, shepherded two such ‘goats’ onto the Chan Centre stage this week: a white one that ‘bleats’ in a mid-range octave and a black one tuned to a shrill soprano.

And then there’s her speaking voice – girlish, almost shy, with just enough charming overlay of an Iberian lisp to trigger a mental replay of her extensive onstage ad libs. Her compound sentences are worth a double-take, as she relates (at some length) Galician lore or her own personal or family history or ethnomusicological antecedents.

She knows whereof she speaks, with a PhD under her belt (and a second doctorate in the works), plus artist-in-residence stints at Harvard and the University of California. She takes her seat at the Chan Centre’s Steinway grand with the poise and authority of a conservatory trained concert pianist.

But she also rocks. When she’s piping, she struts the stage in bright orange stilettos, kicking her heels in the sprightly 6/8-time rhythms of the traditional country fairs, where she – and her accordion player father before her-- routinely regaled dancing crowds in her rural Galician upbringing.

Not surprisingly, the rhythms and some of the melodies sound a bit like the jigs and reels of Scotland, Ireland, or the Scots-Irish inflected dances of North American “hillbilly” music. After all, Galicia was named even in pre-Christian times as a hive of Gaels, a continental bridgehead (along with Brittany in France) for Celtic migration to the Western Isles.

But, with not a Celt or a Gael among them, the other members of the quartet – bassist Edward Perez, accordionist Julien Labro and drummer Mauricio Zottarelli – gamely keep up with all of Pato’s Galician muiñeiras, carballesas, ribeiranas, redondas, chouteiras and contrapasos. More than keep up; they inject rich inputs of their own that Pato readily incorporates, in line with the World Music eclecticism of her Silk Road ethos.

Labro is a natural fit. His instrument, the accordion, is also a staple of Galician music and the tarantellas of Labro’s Sicilian ancestry share the same 6/8 tempo and the accordion is. Swooping and diving with his squeezebox, he adds a visual flair to the show.

So does Brazil-born Zottarelli at the drum set, grooving with Latin insouciance throughout the 100-minute non-stop concert. His South American inflections add extra zest to Pato’s Iberianisms, and he’s equally at home in the cool, sleek jazz lines of New York, where he’s now based.

Jazz is the native element of bassist Edward Perez, the earliest of Pato’s quartet collaborators and, by her own account, her jazz mentor since she first took up residence in New York 16 years ago. Watching their bass and bagpipe byplay sometimes offers an inkling of what it might have felt like to see Mingus at work with brass or wind geniuses like Ted Curson or Eric Dolphy – Perez and Pato are both that limber when they hit their frenzied peak stride.

Pato herself has been a Chan Centre habituée in her Silk Road context, but this was her first appearance here with her own ensemble. It’s also the antepenultimate concert of the Centre’s 2018-19 season. The venue will go on to host two more audience favourites this month: Portugese fado diva Mariza on Wednesday and fusion sitarist Anoushka Shankar on April 27, after which it will announce the schedule for its  2019-2020 line-up.