Worry. (But still Be Happy)

Circlesinging cares away with Bobby McFerrin, Gimme5 and Musica Intima at Chan Centre 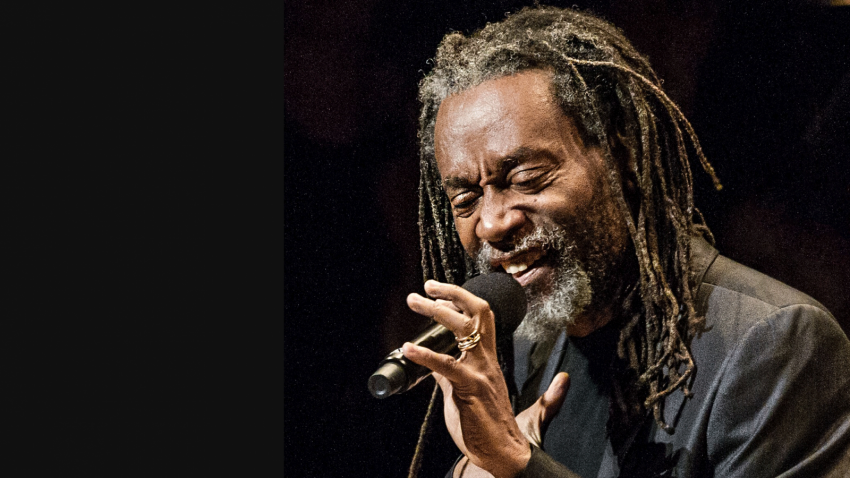 Flanked by his co-stars in his Gimme 5 quintet, he recruits a local choir in each venue he visits. At UBC’s Chan Centre over Family Weekend, it was Vancouver’s own Musica Intima ensemble. He arrays the choristers upstage in a semi-circle behind him like organ pipes, according to pitch range.

Then he patrols the arc of singers in mincing cakewalk steps, ad-libbing little squibs of scat motifs that he assigns to each vocal range. The singers keep looping their designated phrase as McFerrin moves on down the line.

The layered, cumulative effect sounds a bit like a multi-track studio recording by a solo artist of prodigious range. Except it’s all live, improvised on the spot and enriched with dozens of distinctive timbres.

When he’s laid down enough layers, McFerrin cuts dashing shines across the sonic backdrop – anything from arcing falsetto riffs to belly-tickling multiphonic yodels, as his spontaneous inspiration dictates. Gimme 5 bassist Joey Blake undergirds it with his vocal continuo, while tenor David Worm propels it with a forceful beatbox percussion line, all topped with ornate flourishes by alto Rhiannon and soprano Judi Vinar.

Once he’s built up enough momentum, he completes the circle by sashaying downstage to take in the whole audience – all 1,200 of us in the full-house crowd. We, too, get assigned our own mimetic snippets of singing or clapping, as Bobby commands us with the mastery of a symphony conductor (he’s done guest turns on orchestral podia from New York to London to Vienna to Tel Aviv).

He’s come a long way since his ska-inflected single Don’t Worry, Be Happy, back in the Reaganite “Morning in America” heyday of 1988. That chart-topper won him three of his 11 Grammies and brought his goofy, puppyish grin to every MTV screen.

Nowadays, his smile has grown crinklier, maybe even a little rueful, wreathed in greying dreadlocks. And, although Gimme 5’s music remains indefatigably – even defiantly – happy, the group quite frankly worries in our troubled times.

“They wanna build a wall to divide us from y’all,” Worm rhymed in the run up to a paean about “bridges, not walls.” Bassist Joey Blake (professing astonishment that “Canadians can sing!”) earned a rousing ovation when he ginned up the audience to a responsive chant – “one village, one people, one world.”

Most of the program, though, while equally cathartic, was less overtly political. In fact, it was largely free of any intelligible language at all. Each performer boasts a distinctive, individuated “dialect” of scat.

Worm, when he’s not working his beatbox witchery, spins out screeds of what sounds like vaguely Francophone creole. Vinar cuts loose with Latinate tongue trills. Stepping out of his continuo self-effacement, Blake can evoke the populist tropes of, say, a Laurent Kabila, by turns rousing or folksy. And septuagenarian Rhiannon, white-haired and grandmotherly, seems to undergo an out-of-body experience, transforming into a feral spirit-medium speaking in lost tongues.

But the most impressive array of phonemes belongs to McFerrin himself, marshalling plosives, fricatives and liquid labials in service of a subtle scat syntax as varied as his melodic inventions. He seems to draw on a bottomless well of musical originality and sheer physical stamina.

And to think that the whole Gimme 5 roadshow is off to a whole other venue the next day, with an entirely new choral backdrop, to do it all over again. Except, of course, it won’t be quite the same as no two improvisatory Circlesong performances are ever alike. May the circle be unbroken…