The Kids in the Hall Present: Death Comes to Town 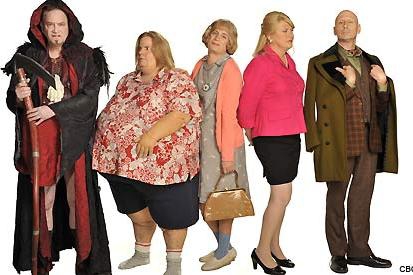 Time has not been kind to The Kids in the Hall. Back when their eponymous sketch show debuted in 1988, Canadian airwaves were hurting for some fresh, irreverent comedy - not seen since the SCTV cast headed south for greener pastures.

The Kids quickly proved to a new generation that Canadian comedy could be delightfully subversive. Sadly in the years that followed, our comedy returned to its corny roots, with shows like Corner Gas and Little Mosque on the Prairie perpetuating worn-out, broadly-drawn stereotypes of Canadiana.

Unfortunately Death Comes to Town, a new eight-part series written by and starring The Kids in the Hall, falls short in reminding a nation once again that Canadian comedy can be genuinely funny (and that our public broadcaster can put together a half-hour of must-watch television.)

The show takes place in the fictional town of Shuckton, Ontario, recently rejected in its bid to host the 2028 summer Olympics. In the first episode, small-town life is upended when a paunchy Grim Reaper (wearing a skimpy leather codpiece and riding a low-rider cruiser bike) arrives to claim his first victim.

Some elements from the original series make a return: the corrupt politician, the alcoholic housewife, the young stoner, two bumbling police officers, and plenty of cross-dressing.  There are also quite a few “Canuck” references: one scene has Death snorting ashes off a maple-leaf TV tray; another shows a morbidly-obese orphan watching Saskatchewan Roughriders football.

Still, Death Comes to Town lacks the emotional and character depth to sustain interest for eight episodes. The murder-mystery plotline feels obvious, the background music is irritatingly amateurish, and the humour elicits smirks and chuckles more than big belly laughs.  (One exception is the Town Abortionist who cheerfully offers women a free kitten for every procedure.)

It may be that middle-aged spread and receding hairlines have made The Kids in the Hall less funny (and definitely less convincing as women.)  Or perhaps their brand of absurdist humour has become passé in a culture dominated by disposable sitcoms, pundit-driven news, and mindless reality television.

Equally possible is that a decade of economic depression, political instability, military conflict, catastrophic climate change and health pandemics has made Canada a less funny place to be.