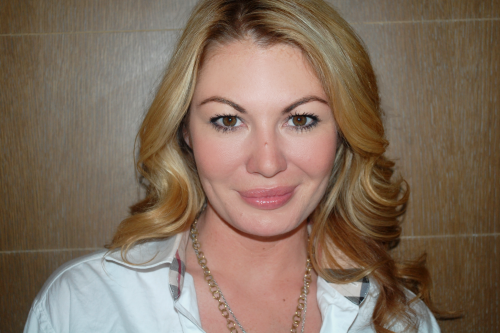 "I'm not married, and I'm not hurting anyone. I don't have children, so I'm not embarrassing my kids. I'm liking my role the best," said Christina Kiesel of The Real Housewives of Vancouver, during her sit-down with The Vancouver Observer on Wednesday morning.

Dressed in her best friend Kevin's button-down shirt and pajama bottoms, with bandages on both her thumbs, the "modern-day Brigitte Bardot" looked as fabulous as ever. Her tall figure was almost otherworldly, as she appeared through the double doors of The Loden hotel room.

"[I'm] discombobulated to be totally honest," she said, walking in.

Though comfortable in front of cameras, having worked as a model for years, Kiesel's first reality show proved to be a brand new experience.

"This is the first time I'm really exposing myself to people's judgment," Kiesel said, her eyes wide.

"I'm kind of a private person. I never even liked my voice on a voice mail recording. So to see myself, it's alarming, but it's also fun."

Not being a "big shopper," Kiesel said that she would rather spend her money on travel.

"It's the experiences. I'm not going to get much experience from this bowl, right?" the 30-year-old bombshell pointed to the ornamental dish with a shiny rock centred on the table.

"But a plane ticket? Imagine all the things."

The reality star was in Mexico a week ago.

"I spend a lot of time in Mexico. I try to travel to Africa as often as possible, so that's my next trip. I was in Madagascar, Kenya, Tanzania, Zambia, Morocco, all of the last year. That's my luxury. My luxury goods."

The dating scene in Vancouver

"Dating is difficult anywhere. You just have to put yourself out there, go online—apparently one in five people meet online now—or you do activites that you like," Kiesel said.

"I don't like running or jogging so I probably wouldn't hit the trail to try and find someone. I'm not going to start jogging around Stanley Park.

"You just have to be open to it, and you never know who you're going to meet. There are very good looking people in Vancouver. There are a lot of attractive people, it's just healthy living that I hear goes on that I don't really partake in. Yes, I hear there's a lot of healthy living in Vancouver" she laughed.

Kiesel boasted about her two failed marriages as her "primary source of income" in the first of the 13 episodes of the show. The former model was open about her two divorces, and said she's still friends with one of her ex-husbands—the owner of Gotham and Joe Fortes restaurants, two of Kiesel's favourite hangout spots in the city.

"He and I are great friends. I've set him up with some of his girlfriends," she added.

When it comes to love, Kiesel has doubts about there only being one "perfect match".