Even with Dennis Quaid as lead, Vegas fails 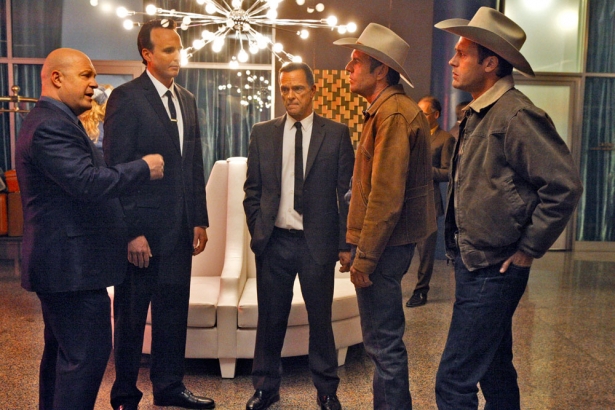 It’s nice to see Dennis Quaid on television, even on CBS. And, while I can take or leave Jason O’Mara and Michael Chiklis, it’s good to see Sara Jones get another prime time gig after Alcatraz failed to launch.

But there’s something about Vegas that just isn’t working.

Keep in mind that I love Westerns and have always been fascinated by Las Vegas and its seedy history.

In short, I have many reasons for wanting this show to do well.

The action centers on Quaid’s character, Ralph Lamb, a gruff Nevada rancher, his brother Jack (O’Mara), and his son Dixon. Chiklis plays Vincent Savino, a casino owner and member of the Chicago mob.

In the pilot, Lamb gets drafted to solve the murder of the governor’s niece because the sheriff is missing. Confused?

You should be. Apparently, the mayor knew Lamb when they were both in the army and Lamb was an MP. As well, he remembers how Lamb once solved a strange and difficult case. After everyone else had thought the case closed, Lamb found a vital clue that everyone had missed, thus correcting a potential miscarriage of justice. When the sheriff turns up dead, Lamb gets the job full-time.

Now, the ‘60s were another time, but seriously. Everything about the set up is way too convenient. Lamb just happens to have a dispute with the airport when the mayor needs a favour. The angry rancher just happens to be a gifted investigator, despite having been a rancher for many, many years. And don’t most American cities elect their sheriffs?

Still, I could forgive all of these issues if the characters were actually compelling, and in my opinion they simply aren’t. To be honest, I don’t find Chiklis or O’Mara to be very interesting in any context. They both just feel so basic cable. But it’s more than my distaste for two of the show’s actors. The problem with Vegas is that it lacks honesty. It’s just too contrived.

To give you a sense of what I mean, let’s compare Vegas with Justified (which returns on FX in early 2013). There are plenty of parallels between the two shows, which actually leads me to think that CBS is trying to replicate Justified’s appeal for a wide market. Lamb is essentially an older Raylan Givens: a throwback cowboy lawman who is soft spoken and full of deep-seeded anger. Being older means that he can be a family man. Voila: big tent appeal. Vegas’ Savino serves the same narrative purpose as Justified’s Boyd Crowder, a complex nemesis who, while clearly a man of questionable morals, remains somehow redeemable. He’s not just an old-style villain. Savino’s floor manager Mia is an analog for Boyd’s Eva Crowder. Both women offer strong counterpoints to the big nasty boss, with whom each woman has a storied and complex relationship.

In short, it’s all the same devices, all the same tropes, transposed from FX to CBS, and thus robbed of its entire soul. As a procedural, you know that the case will be wrapped up by episode’s end and you know that none of the central characters is ever really at risk. Unlike Justified, Vegas offers no great performances and no great writing. Vegas is an empty shell of Justified, which is easily one of the best shows on television, now or ever. Of course, this is the standard CBS treatment of a perfectly good premise. I have to wonder what’s next. CSI: Westeros?