In-jokes and out-takes abound in Shakespeare in Love 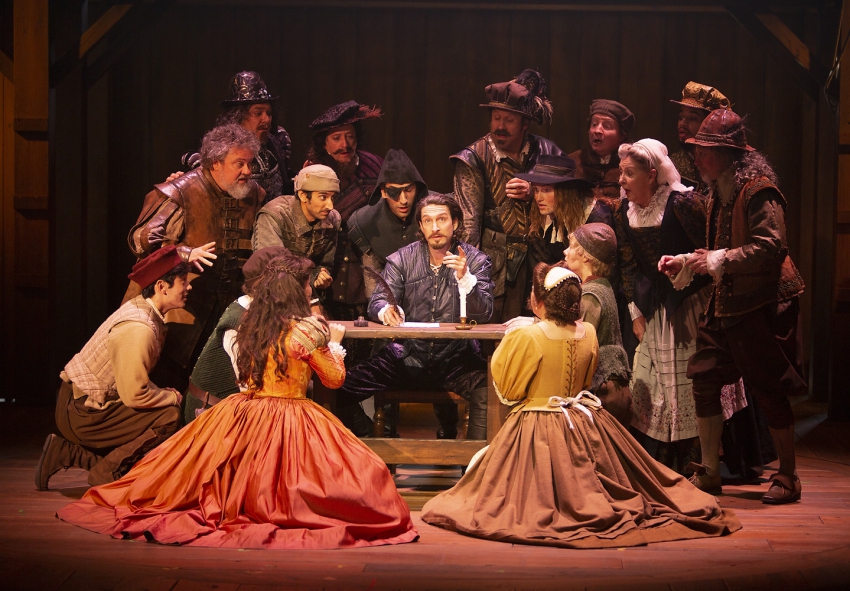 The whole world waits while Will wrestles with writers' block. Photo: Tim Matheson

“Not marble nor the gilded monuments/Of princes shall outlive this powerful rhyme,” boasts Shakespeare in his Sonnet 55, and we’re inclined to believe him, as though his every immortal word is graven in stone for all time.

All too easy to forget that he must at some point have landed up in Elizabethan London as an unknown yokel struggling to make his mark in the theatrical world and likely subject to the same writer’s blocks as many another aspiring playwright.

That irony was hardly lost, though, on Marc Norman, a B-list script writer who’d languished long enough on the fringes of Hollywood  success to understand something of the dilemma first-hand. In the early 1980’s Norman started shopping around the idea of a screenplay about young Shakespeare as a stymied wannabe until he finds his Muse in a clandestine romance. Will’s love-interest is a stage-struck noblewoman who’s joined his troupe disguised as a man to evade the bluenose gender restrictions of the Elizabethan theatre.

After nearly a decade of ups and downs, Norman finally sold this concept to – of all people – Miramax producer Harvey Weinstein (now of #MeToo infamy), who in turn recruited director John Madden and a star-studded cast including Joseph Fiennes as Shakespeare and the pre-Goop Gwyneth Paltrow, in her finest thespian hour, as his inamorata.

But Weinstein’s greatest recruiting coup was to enlist playwright Tom Stoppard to flesh out Norman’s skeleton script with his inimitable wordplay and allusive erudition. Nobody can match Stoppard for turning Shakespearian texts inside-out, recentering plotlines on minor characters to explore philosophic themes and human foibles from fresh and marginal perspectives.

Stoppard first burst on the theatrical scene in 1966 with his Rosencrantz and Guildenstern are Dead, a provocative amalgam of Shakespeare’s Hamlet and Beckett’s Godot. Three decades later, Shakespeare in Love is far less heady – a Hollywood Rom-Com, after all – but bedecked with enough Stoppardian sparkle to garnish some seven Oscars and the 9th highest gross box office receipts of 1998.

With such a triumphant track record, was only a matter of some 15 years before somebody – West End producer Sonia Friedman, as it turned out – should decide to reclaim Shakespeare in Love from the flickering shadow-world of celluloid ephemera to the earthy here-and-now of the live stage. That is, after all, the play’s natural home, set amidst the hurly burly of Shoreditch groundlings, preening actors, deadline-beset writers and rival impressarios.

Stoppard himself comes from just such a milieu, and Friedman first offered him the assignment of a stage adaptation. Perhaps he’s become too grand for such journeyman work; he’s now Sir Tom with an alphabet soup of honorifics (OM, CBE, FRSL) after his name. And who better than he would understand the intricacy of shoehorning a screenplay back onto a stage? So he turned the project over to his brilliant protégé, Lee Hall, of Billy Elliot fame.

For all the logistic complexity of wrestling a movie-sized cast and fluidly cinematic scenography onto the relatively narrow confines of a physical stage, live performance presents some advantages. For one thing, there’s more tolerance for the high-flown glory of Shakespearian language than you could get away with in a film.

Then, too, there’s the shared, catch-as-catch-can, one-off serendipity of a company of flesh-and-blood actors sharing a real-time space with a living, breathing, ever-changing audience. Which is, after all, what this play is all about: a love letter to the risky magic of live theatre.

To bring the adapted script to its Vanier Park stage this year, Bard on the Beach tapped a veteran Shakespeare in Love director, Daryl Cloran. He’s already mounted the play once in Edmonton’s Citadel Theatre, where he presides as artistic director. In the starring roles, Cloran has casted six-season Bard recidivist Charlie Gallant as Will to pair off with Toronto-based UBC alumna Ghazal Azarbad as his Muse, Viola de Lesseps.

In love they may be, these two, but seemingly less with each other than with their own grandiloquence and the titillating risk of detection. Still, they admirably bring out the magnificence of Shakespeare’s language and keep up with Cloran’s brisk pacing.

As do the other players in the outsized cast – 18 players in fully 26 roles, mostly familiar faces to Bard habitués. If you take in both Bard mainstage productions this season, which I heartily recommend, you can amuse yourself comparing some of the supporting roles in this show with the same actors’ performances in Taming of the Shrew.

A couple of stand-outs: Jennifer Lines, the eponymous Shrew, here reincarnates as a tartly peremptory Queen Elizabeth; Kate Besworth, a ditzy tease in in Taming, here reincarnates as a baby-faced, angel-voiced, sullenly spiteful young stripling who, we learn, will grow up to become the penny-dreadful Jacobean tragedian John Webster; Austin Eckert, a minor cowboy in Taming, emerges as a homoerotically flirtatious Kit Marlowe, Shakespeare’s indispensable idea man and Cyranoesque prompter for the Bard’s own awkward balcony scene in Viola’s garden.

Just as the cast is recycled between the two mainstage productions, so too is Cory Sincennes’ wonderfully flexible set. In Taming, it appears as a raw corral framework for a Wild West frontier town; here it morphs into everything from a royal palace to the heavy half-timber of a Shoreditch bear-pit style theatre arena. A revolving platform allows us to seamlessly transit from the fore-stage to the backstage as Will and his players cobble together the haphazard, improvisatory masterpiece of Romeo and Juliet (it began life as Romeo and Ethel, the Pirate’s Daughter, in Stoppard’s telling).

Music director Mishelle Cuttler uses period instruments to set the recurring text of Shakespeare’s Sonnet 18 in a range of moods, from sprightly to pensive, some of which get parlayed into reels and gavottes by choreographer Julie Tomaino. Jonathan Hawley Purvis, who served as both choreographer and fight coach in Taming, here at least retains the latter role for the semi-slapstick duel of the play’s climactic scene.

But the real cut-and-thrust of Shakespeare in Love lies in the interplays of rapier wit that Stoppard. Norman and Lee bequeath to their characters and Cloran so masterfully evokes from his accomplished cast.