Bard on the Beach: choosing between 'A Comedy of Errors' and 'King Lear'

Few similarities exist between Shakespeare’s The Comedy of Errors (early comedy) and King Lear (late tragedy), except that both contain confusions of identity. With the comedy, it’s a simple physical matter; with the tragedy, it’s a matter of character. 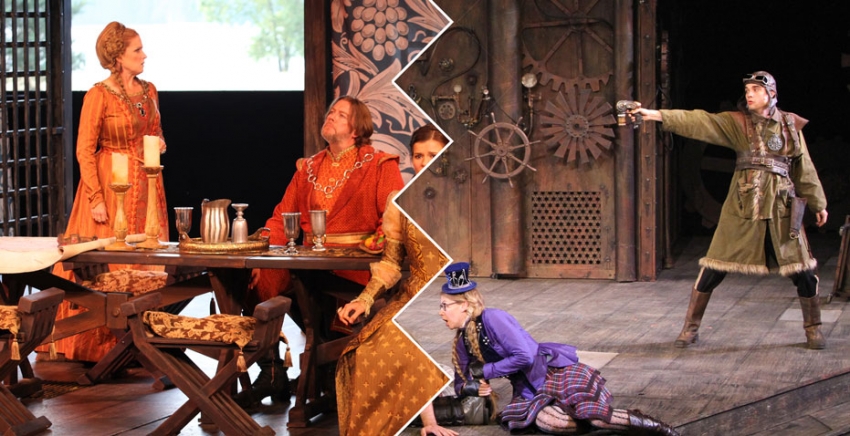 Photo courtesy Bard on the Beach and David Blue

It’s pretty hard to pass up the opportunity of a warm evening in a summery tent watching comedy, but what does it take to endure three hours in that same cheerful tent when tragedy is on the bill?

After opening night in his après-show speech, Comedy of Errors director Scott Bellis confessed that the hyperkinetic steam punk vision was truly a view into his brain. Man, what a chaotic world that must be, but what was amazing about this steam-punk treatment was how it brought out the mechanical-ness of Shakespeare's characters. There’s little character development and all ambiguity is achieved through the silliest of devices ever conceived:

Noble twin brothers, both named Antipholus are separated near birth. They're each attended by manservants both named Dromio, also both twins, and coincidently both separated near birth. Okay. So, all pretence of credibility is lost from the get-go, but it does pave the way for two acts of implausible antics that would put a 1960’s TV sitcom like say, Gilligan’s Island, to shame.

As all concerned contort themselves into knots of confusion, order is returned only by the final denouement, which releases them (and us) into a suitably happy ending. It’s banal. It’s beautiful. And everyone gets to go out smiling into that warm night, cheerful. A perfect experience to keep Tourism Vancouver and Vancouver is Awesome bloggers piddling at their keyboards for months to come.

King Lear? Well, that’s a different matter. It might be an exemption to juxtapose the signature backdrop of pleasure craft bobbing in English Bay against the enormous tragedy of Lear downstage, because otherwise this theatre-in-park thing for tragedy just doesn’t work so well.

Fortunately, the terse adherence to Elizabethan costumes (no goofy steam punk here) and some really top-notch performances from Benedict Campbell (as King Lear), and his two evil-est daughters, Colleen Wheeler (as Goneril) and Jennifer Lines (as Regan) kept us rooted to our seats in a prolonged state of urgency.

Lear, an aging King, has decided to partition his kingdom amongst his three daughters and their suitors. On hearing his daughters' protestations of love, the old king mistakes the frankness of his principled daughter (Cordelia played by Andrea Rankin) as deceitful, and the other two treacherous daughters as honourable. Too soon old—too late wise. From there, like some piece of appalling Elizabethan office politics, tragedy unfolds as each character’s self preservation instinct kicks in.

In the end (and with Polanski-inspired gore), we look out beyond the heaps of dead and out through the theatre's portal into the preternaturally hot summer night wondering, who can we trust? Deep stuff. People cried. A standing ovation on opening night, this time well deserved.

So, take your pick: A fine romp of cheerful summer fare with The Comedy of Errors or a thoughtful exploration into the human condition with King Lear.

Bard on the Beach’s The Comedy of Errors and King Lear run all summer on the BMO Mainstage in Vanier Park until September 20.