King of Hearts trumps all jacks 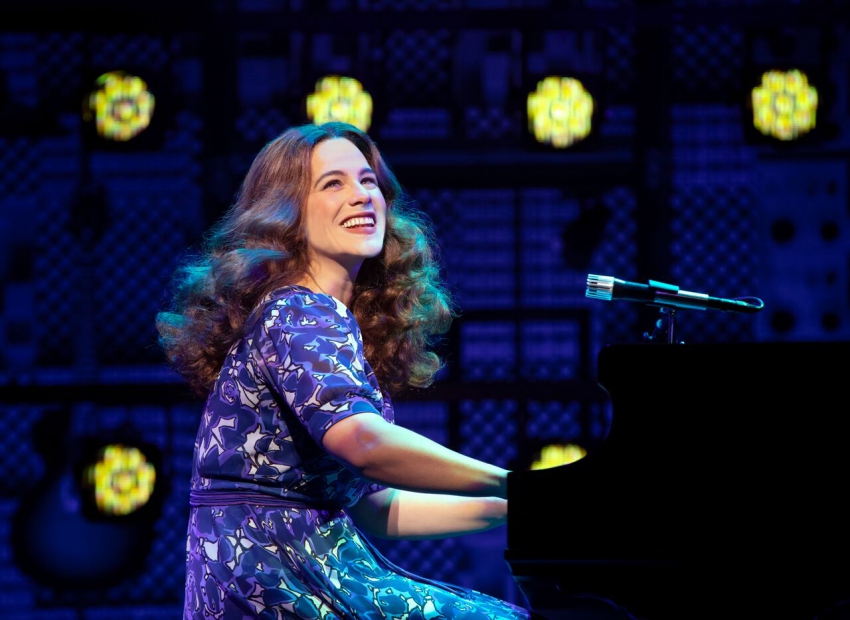 1971 redux: she felt the earth move under her feet. Photo: Joan Marcus

About 200,000 years of human experience convened in the QE Theatre last night for the opening of Beautiful, the latest jukebox musical from Broadway Across Canada (BAC). That number comes from multiplying the venue’s 3,000-seat full house capacity by my eyeball estimate of the average age of attendees: 66⅔.

By that reckoning, most of the audience would be about a decade younger than the show’s protagonist, singer/songwriter and feminist balladeer Carole King. But they’d still be old enough to remember – perhaps with a twinge of nostalgia – the 1950’s bomp-she-bomp era of gibberish bubblegum rock.

And then to remember the 1960’s pop music revolution ushered in by King and her quondam husband/partner, Gerry Goffin, along with such friendly rival teams as the original bomp-she-bomper Barry Mann and his lyricist/paramour, Cynthia Weil.  Their game changing inspiration: why not give the songs well-turned words that actually meant something?

Still, those words had to be placed in glamorous, pricey, celebrity mouths to make it all the way to American Bandstand or the top of the Billboard Pops charts. Meanwhile, the writers and composers toiled in relative anonymity, They logged in long hours in a New York music publishing sweatshop, just to make ends meet so they could escape their day jobs and gain a toehold of suburban respectability.

Scriptwriter Douglas McGrath centers his clunky, exposition-heavy book around the interplay of these unsung songsmiths. The co-stars of the BAC roadshow – Sarah Bockel as King, Dylan Wallach as Goffin, Alison Whitehurst as Weil and Jacob Heimer as Mann – do what they can with the uninspired dialogue.

Their acting almost doesn’t matter, anyway, since as singers they all pack more than enough voltage to galvanize the show's musical payload.

And so do the 18 immensely talented and promising up-and-comers that BAC has recruited to fill out the chorus line and portray such iconic groups as The Drifters, The Shirelles or The Righteous Brothers. Costume designer Alejo Vieti festoons the ensemble players in all the requisite glitz to bring out the full fabulosity of roadshow choreographer Joyce Chittick’s hyper-coordinated dance routines.

Set designer Derek McLane and lighting designer Peter Kaczorowski unfurl it all against throbbing arrays of multi-coloured lights reminiscent of an actual, period-accurate 1960’s jukebox. It was enough to set many of us Boomers subliminally jitterbugging in our seats.

Special credit is due to tonsurial curator Charles LaPointe, who kept pace with King’s famously shifting hairstyles from her bobby-soxer ponytail of the 50’s to her leonine mane of the 70’s.

Of course it wasn’t just the coiffure that was changing but also the mindset under the wig. The QE crowd of Boomers – and especially Boomettes – hang right in there with King as she navigates the shoals of counterculture, divorce, single parenthood, glass ceiling sexism and West Coast migration, only to finally find her own voice in her iconic, generation-defining 1971 album Tapestry. No more anonymity after that.

Her newfound celebrity was enough to propel her to a solo tour de force concert at the pinnacle of performance venues, Carnegie Hall. And that’s where this show ends, leaving the audience amply satisfied but omitting decades of what is arguably the most interesting half of King’s life.

She’s lately been sighted living in ruby-Red rural Idaho, composing brand new music and lyrics, working on a novel and standing her ground against the encroaching tide of Trumpism. Brockel’s virtuosic rendition of King, while emotionally nuanced and musically polished, conveys little of this steadfast ferocity.

Too bad. King’s career, by her own reckoning, has been unabashedly political, and -- without sacrificing any entertainment value -- previous BAC spectacles (think Motown or even Kinky Boots) haven’t shied away from such subtexts.

Or is it already too late for that in an American roadshow musical? After all, as King would be the first to acknowledge, “Ya can’t talk to a man with a shotgun in his hand.”