Musical theatre in Stanley Park: starlit spectacles for all ages 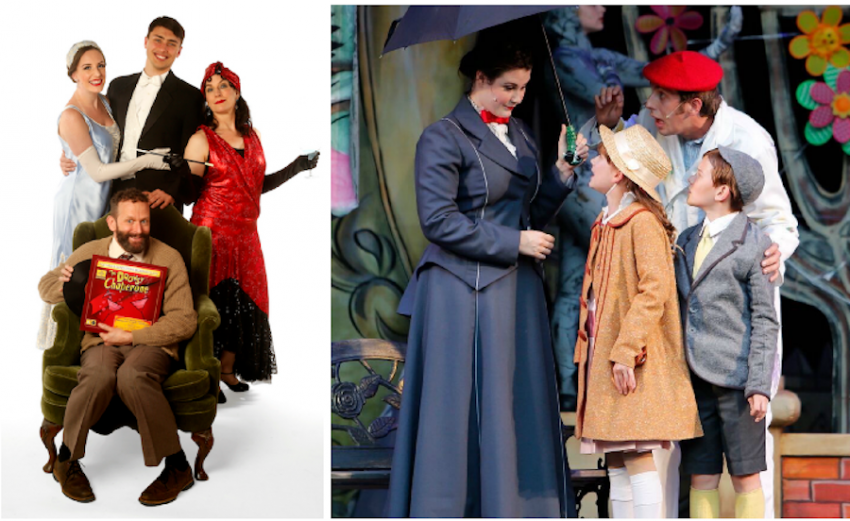 "Anything can happen if you let it." Photos: Tim Matheson

About half the devotees are ageing nostalgics, hearkening back to the glory days of Broadway glitz and glamour. And the other half comprises stage struck children greedy for splash, spectacle and sentimentality. (Of course, the former group is just the latter group grown older).

So every summer TUTS reliably mounts a pair of productions in the park’s Malkin Bowl. One show caters largely -- though not exclusively -- to the senior set; the other to pre-teens. But this season, the company’s doubled down with a few meta twists.

The “grown-up” show, The Drowsy Chaperone, is all about nostalgia for nostalgia, a bittersweet paean to the nerdy musical comedy discophiles of the LP era. And in the kid-friendly stage version of Mary Poppins, it’s the show-stealing juvenile co-stars who most enthral the juvenile audience.

For there’s nothing marginal about the juvenile roles in a show like this. Lola Marshall and Nolen Dubuc, as the pampered progeny of Victorian one percenters, dominate just about every scene.  They sing, they dance, they eloquently emote – all with a practiced, professional aplomb far beyond their years (ages 11 and 9, respectively). These two kiddie troupers are absolutely central to the production.

In fact, kid-centricity would seem to be the take-away message of this script. The pater familias of the household (Russell Roberts), traumatised in his own youth by a martinet governess (Jaime Piercy), scants his children and his actress manquée bride (Lalainia Lindberg-Strelau) in his blind pursuit of career success and social status.

But then a new nanny (Ranae Miller, in the title rôle) wafts into the household – literally, from the sky, on a guy rope – to set him to rights and remind him what’s centrally important in his life: the kids. She doles out her homiletic medicine with rather more than a spoonful of sugar, offsetting her tart nanny diction with a warbling singing voice and fluent dance moves. By the final enthusiastic curtain call, pretty much every one of the 20-odd players onstage plus the entire packed audience have become rapt converts to Poppinsism.

But the sincerest votary is Mary’s inseparable acolyte, Bert (Victor Hunter). The dogma of kid-centricity must come naturally to him; for all his gangling stature and Cockney baritone, he seems a guileless, eager kid that’s never had to grow up. Even his occupation – chimneysweep – was traditionally reserved for children in 19th century London, as scathingly described by both William Blake and Karl Marx, near contemporaries of Poppins’ blithesome dramatis personae.

No such darkling overtones intrude upon the tap-dancing sweeps in the TUTS production. But director Shel Piercy, a long-time film and TV veteran, does toss a passing nod now and then to the glaring inequity of harried backstairs minions scrambling to prop up clueless toffs.

Witty lyrics somewhat enliven the banal, Disneyfied musical score, and conductor Wendy Bross Stuart kept the tunes pumping out of the 12-member mini-orchestra. Which gave choreographer Nicol Spinola plenty to work with in the non-stop jiggle and jounce of the show. Two highlights: a corrida of duelling nannies and a sarabande of electronically spangled stars.

But the music, lyrics and choreography of Mary Poppins look decidedly loosey goosey compared with the mannered formalism of The Drowsy Chaperone. It’s a mash-up of early- to mid-20th century show tune styles, all meticulously recreated by a quartet of Canadian musical comedy geeks, Lisa Lambert and Greg Morrison (music and lyrics) and Don McKellar with Bob Martin (book).

It posits an imaginary 1928 musical with production numbers redolent of everyone from Cole Porter to Busby Berkeley to Flo Ziegfield to Marx (Groucho and Chico, not Karl). These pitch-perfect recreations attest to the devoted geekiness of the show’s co-creators, not to mention the TUTS production leadership: director Gillian Barber and choreographer Shelley Stewart Hunt.

With such a geeky lineage, it’s no wonder that the show’s creators have wrapped their play-within-a-play inside a meta-story about a musical comedy geek. Too shy to actually attend a theatre, the Man-in-a-Chair (Shawn Macdonald) stays home and self-medicates his many neuroses with hoary LP’s. In his mind’s eye, he unfurls lavish Broadway productions, complete with annotated cast lists, to people his lonely apartment.

Tonight, as a special treat, he’s going to regale us with his prize recording of the (fictive) 1928 hit The Drowsy Chaperone. No plot to speak of; just a mishmash of clichés, including a vain starlet (Shannon Hanbury), her bibulous duenna (Caitriona Murphy), her popinjay fiancé (Stuart Barkley), a Broadway impresario (Stefan Winfield), a ditzy chorus girl (Lauren Gula), a pair of vaudeville gunsels (Kai and Nicholas Bradbury), a senile matron (Sheryl Anne Wheaton) and her English butler (Peter Stainton).

But the players evoke these stock characters to a tee, and costume designer Sinosich fills scenic designer Ball’s static set with gaudy textures and colours, the better to highlight the kaleidoscopic symmetries of Hunt’s choreography.

Thin fare, but fun. As the Man-in-the-Chair sums it up right at the outset: an undemanding cure for “non-specific sadness.”