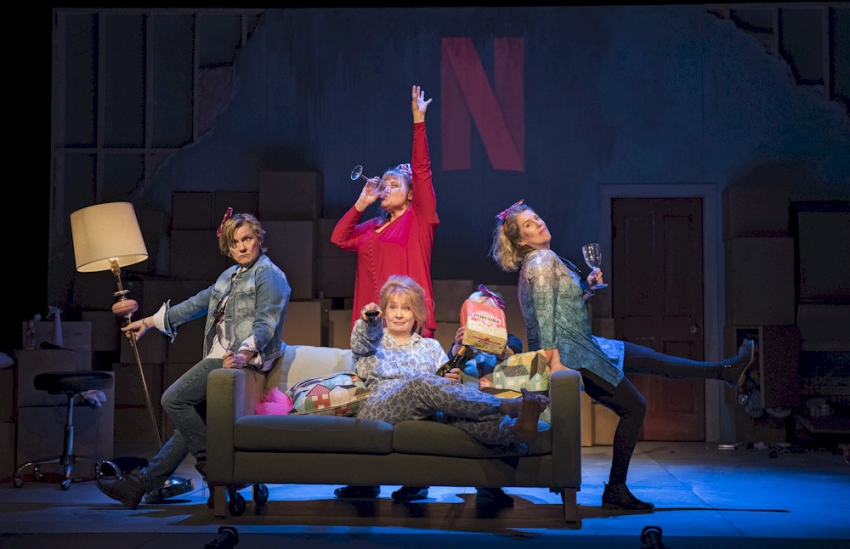 About halfway through Act Two of Nest ½ Empty, the Midlife Crisis cabaret by Vancouver’s homegrown Mom’s the Word Collective, the houselights come up. Playwright/performer Deb Williams takes to the aisles of Arts Club’s Granville Island theatre to poll audience members about how much of the onstage action jibes with their own lived experience.

The theatre is just about half-full, which hardly seems fair for such a wickedly funny and bracingly brave show. Not all that surprising, though, since this is a rerun of a 2017 production that debuted here and went on to tour from Kamloops to Avignon.

And even those that did show up for opening night of the rerun looked to be mostly recidivists – dedicated Moms fans who’d seen the show before, judging from their rueful or bemused responses to Williams’ queries.

Women-of-a-Certain Age predominated, from the same demographic as the onstage talent. A fair sprinkling of greying/balding hubbies laughed along with the jokes about hot flashes and waning libidos. Several fallen-away NextGen nestlings gamely grinned through all the slacker-in-the-basement gags or the whaddabout a grandchild insinuations. (Williams: “I hope you’re taking notes, kids.”)

The audience also included plenty of well-known show-folks from the local theatre scene, presumably in recognition of the consummate professionalism of Williams and her four playwright/performer compeers – Barbara Pollard, Robin Nichol, Alison Kelly and Jill Daum.

Between them the five women have logged in decades of experience on such premiere repertory stages as Bard, Stratford and ShawFest, not to mention international touring circuits, movie and musical roles, edgy “Little Theatres” and faculty berths in top-tier drama schools.

Such achievements might have seemed tantalizingly out-of-reach 17 years ago. That’s when the group found each other as a mutual support team for a quintet of theatrical up-and-comers whose promising careers seemed sidelined by the onset of first-time motherhood. Swapping maternity stories – by turns poignant or hilarious – they came to realize that their Mommy adventures were eminently stageworthy as a medley of skits and songs.

Audiences enthusiastically agreed, and the show took off, first as a Vancouver sensation and then as an award-winning international hit, by now translated into 14 languages. This success helped reignite each of their individual, independent careers. But the Moms and their fans keep coming back for updates of their collaborative farrago. Currently in its fourth edition, the Mom’s the Word cabaret gets repeatedly revamped to reflect the evolution of its five co-stars as their children transition from infants to toddlers to pre-teens to adolescents.

And now the kids are grown and flown, for better or worse – some to far-flung triumphs, some to the smothering embrace of sub-optimal in-laws, some to failure and anomie, some to boomerang back home for surly reclusion in the family basement.

Each such outcome presents a Mother Lode of comedic irony, with an accompanying undertone of pathos. And so do the many ancillary contretemps that womanly flesh is heiress to at this stage of life. Menopause heads the list. Close runners-up: acrimonious divorce or stale marriages long past their sell-by dates.

Then, just as your kids are ready (or not) to fly the coop, your own ageing parents need your Mothering as they round on the “second childhood” of dotage. Or, even more pointedly, your mate of three decades sinks slowly into dementia.

That latter case is not just a dramatic premise for Jill Daum, one of the Collective’s five playwright/performers: it’s been her reality ever since 2012, when her husband, frontman Jim Mann of the iconic folk-rock band Spirit of the West, was diagnosed with early-onset Alzheimer’s. The story is all-too-tragically familiar to Canadian arts audiences to elicit a lot of laughs (although Daum does manage to amuse us with her witty takes on side-topics like Skype grandparenting, the sorrows of insomnia and such).

Without any such public travails, the other four Moms still manage to project their stories with all the sharp-edged bite of actual lived experience, each establishing in the process a distinct persona. Williams comes across as a testy bulldog whose favourite chew toy is a throw-pillow emblazoned with her husband’s bland portrait. Nichol, too, projects a fed-up world weariness that she gamely tries to offset with perky – but unavailing – self-help initiatives.

Pollard takes a more pointed approach to self-help, slashing the stage set with a rather serious kitchen knife to exorcize her divorce trauma. She cools down her menopausal flashes at the neighbourhood Rec Center, fantasizing about her hunky AquaFit instructor while dallying with pool noodles and Jacuzzi vents.

Rather than seeking solace in self-help, Alison Kelly’s determined to aggressively help her grown-and-flown offspring, whether they want it or not. As a Stalker Mom, she cat-burgles her way into her grown children’s apartments, radically “tidying up” while no one’s at home.

These dilemmas may not be exactly autobiographical, but they come off with a wacky intensity that bespeaks lived experience (well, somebody’s lived experience, anyway). Less convincing are the “happy ending” denouements to fit the upbeat conventions of vaudeville: couples therapy for Williams, Pollard’s cathartic phone-call with her ex-, bemused resignation for Nichol and a daughter’s gift of a doobie for Kelly.

But no need to dwell on any storylines in such a brisk and blithe production. The whole review is deftly stitched together by the Collective’s long-time director, Wayne Harrison, who, in between Moms gigs, assembles holiday and festival celebrations in his native Australia, Las Vegas reviews and stage plays internationally.

Arts Club veteran and Moms stalwart Pam Johnson provides a wonderfully flexible stage set of simple packing cartons and wheeled furniture, as well as a dizzying array of outrageous quick-change costumes. And choreographer Anna Kuman puts the Moms through a set of campy paces in a couple of production numbers.

Before our very eyes, the Moms have grown in their roles apace with their devoted fan base – a far more coherently actuarial timeline than most cabaret acts ever get to enjoy. By now they’ve pretty much recapitulated most of Shakespeare’s Seven Ages or Eric Erikson’s Eight Stages. It’ll be fascinating to see what sort of vaudeville they can wring out of what’s left.