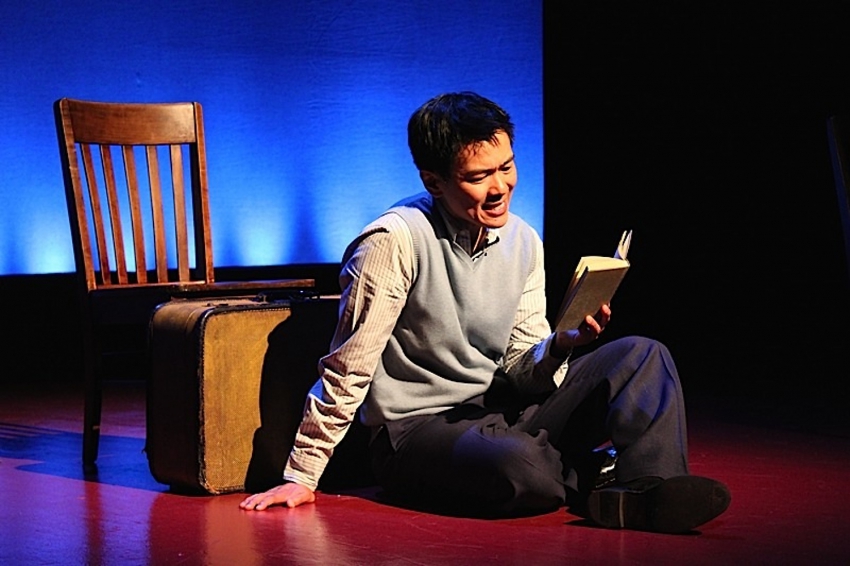 True-believer plays it by the book in "Hold These Truths." Photo: Laura Pates

“We hold these truths to be self-evident,” the U.S. Declaration of Independence declares, “that all men are created equal, ...[having] unalienable Rights…[to] Life, Liberty and the pursuit of Happiness.”

Self-evident, perhaps, but not self-implementing. And anyway, as that great American icon Tonto pointed out to his Kimosabe, when push comes to shove, “Who’s this ‘We,’ Whiteman?”

Playwright Jeanne Sakata drops the subject pronoun when she references the Declaration in the title of her searing docudrama about the legal fight against the World War II internment of Japanese-Americans. She leaves it at just three words: Hold These Truths – an imperative, a stern order, rather than a simple declarative sentence.

It’s an invocation we need now more than ever. More, surely, than in 1987, when a U.S. Appeals Court finally overturned the 1943 conviction of the play’s protagonist, Gordon Hirabayashi, for refusing internment. And surely more than in 2012, when Barak Obama posthumously awarded Hirabayashi the Presidential Medal of Freedom for his principled resistance .

Veteran actor Joel de La Fuente has (in-between his many TV and movie roles) been playing Hiryabayashi and a dozen-odd ancillary Hold These Truths characters onstage since 2012 in the long-running and widely-toured show.

But over the last three years he finds himself increasingly “performing out of a gut-pit of rage” as barbed-wire-enclosed concentration camps sprout up again in the U.S., while Trump and his allies cite the World-War II Japanese internment as legal precedent for their ethnically-profiled Muslim restrictions.

As Hirabayashi, though, de la Fuente channels the rage into a the polite, upbeat, enthusiastic – but iron-willed – persona of a naively principled State U. undergrad fresh off the family farm. He’s well aware of some strictures, since the farm family happens to be Japanese and the U. is in the de facto segregationist Washington State of the 1940’s.

But he has his multi-ethnic circle of classmates, church friends, even an adoring blonde girlfriend (all of whom de la Fuente splices into his monologue in brilliant sketches). Taking his Civics 101 lessons at face value, he reveres the U.S. Justice system and FDR – all the more so after, on a YMCA trip to New York, he encounters not a single “No Japs Allowed” sign.

So, when internment orders finally come down, Hirabayashi – politely but very publicly – refuses to comply, much to the distress of his family and the U.S. Defense Department. Representatives of both sides -- parents, colonels -- pressure him to relent, each of them wheedling, threatening, bribing and pleading in their own way. All in vain. His defense team (a feisty Quaker lawyer and a vacillating ACLU) pushes his case on appeal all the way to the Supreme Court, where he loses by unanimous decision (despite the halfhearted qualms of a couple of Justices).

After nearly half a year of under-trial detention, he gets a token sentence of 60 days. He bargains to get 90 instead, so he can serve his term outdoors in a work-camp rather than another couple of months in a cell. It’s OK with the judge, except the nearest allowable work camp is 1,000 miles away in Arizona; he’ll have to make his own there.

No problem. In a lyrical passage, he recounts his cross-country hitch-hike, arriving only to find that the work camp warden had no record of him and would just as soon simply set him free. Hirabayashi declines, spends a highly educative few months in the Arizona mountains with a crew of felow outcasts (including an embittered Hopi Indian sage). He eventually makes it back home to marry his girl and get on with his life.

We reencounter him decades later as a PhD sociology professor in Edmonton (a miraculous transformation de la Fuente effects just with subtle shifts of voice and body language plus a pair of specs). He’s older, maybe a little sadder, but still a True Believer, albeit of a more philosophical bent. How, he wonders, does a Truth become self evident? Is it all at once, in principle, or gradually, with setbacks, in practice? Is a Truth, eclipsed, no longer true?

Under Lisa Rothe’s direction, de la Fuente paces his performance impeccably, interpolating a score of cameo portraits into his monologue without missing a beat. Mikiko Suzuki MacAdams’ set is simplicity itself: just three oaken schoolhouse chairs that can stand in for everything from a courthouse to a jail cell to the Empire State Building.

A large, canted window frame hangs over it all, as though to remind us that this all-American kid is doggedly holding his own under the full glare of public scrutiny and the long gaze of history. Lighting designer Cat Tate Starmer offsets one scene from another by bathing the background cyclorama in primary colours – no wimpy pastels or shades of grey for a purist like Hirabayashi. When his prison door clangs shut, an overhead spot suddenly turns his figure ghastly white.

It goes without saying, for any Canadian minimally versed in our own history, that the America's Japanese-internment shame was perfectly mirrored up here. All the more urgent that we hold fast to our own bedrock truths, whatever blight descends south of our borders.