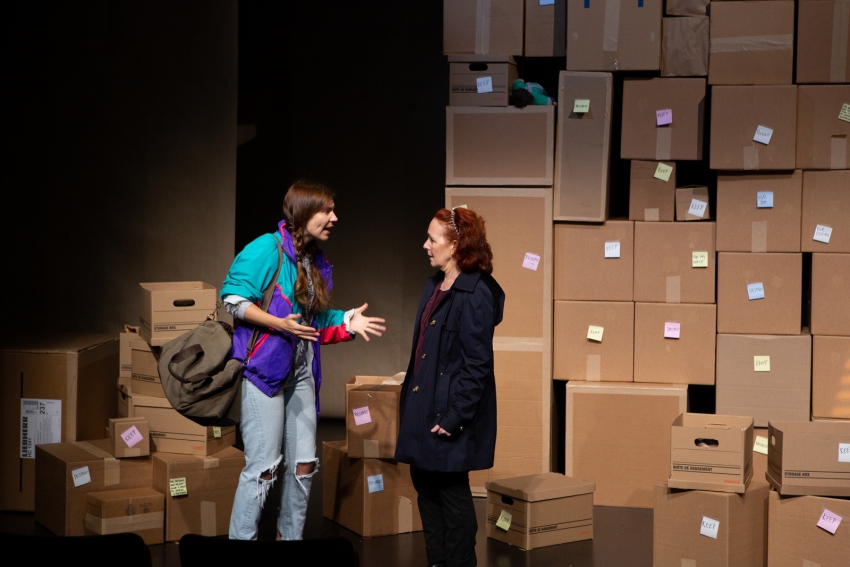 The encounter, in designer Jennifer Stewart’s brilliantly flexible stage set for the world premiere production, takes place before a sheet of plain packing paper that’s meant to figure the facades of a pair of adjacent bungalows on a modest Coquitlam side street.

The blank floor-to-ceiling curtain silhouettes the two co-stars’ initial confrontation, highlighting the loggerheads contrast between them. Phyl is a Gen Y hipster in braided pigtails and tatterdemalion jeans; Bea is an embittered Boomer with hotplate orange hair.

They’re tossed together by a fraught mystery. In the bungalow behind the paper curtain, the solitary tenant has just inexplicably gassed herself in her car. She carefully set it all up for her long time neighbour, Bea, to discover the body and be saddled with the duties of her executor.

These include arrangements for a proper Catholic funeral and – most gallingly of all – handing over the house and all its contents to the Late Lamented’s sole legatee: her long-lost niece, Phyl, daughter of her late estranged sister. No wonder Bea’s so pissed. Why should she be burdened with all the shocks and chores, while a total stranger is left to reap the material benefits?

But the mystery is just as burdensome to Phyl. Summoned by bus from the far corners of B.C., she has no notion at all of her late aunt and no roots in Coquitlam (or seemingly anywhere else, for that matter). She’d just as soon be shut of the whole legacy, except for the cash involved. But those bankbooks, according to the will, can only accessed once Phyl’s disposed of the house and delivered a funeral elegy.

And how to eulogize someone she never knew? The woman’s never even named in Deveau’s script; to Phyl, she’s just Aunt Whodunnit. The neice has no recollection of her aunt, no idea why she’d kill herself or how she’d so totally cut off all family ties. Are the answers somehow buried inside the bungalow?

After their preliminary exchange of unpleasantries, the two women tear down the paper curtain to stand amazed before the rest of Stewart’s stage set: a towering wall of paper packing crates. It turns out Aunt Whodunnit was a lifelong hoarder, but fastidiously organized. Everything’s sorted by category and labeled with Post-it notes.

Bea’s as stunned as Phyl. Living right next door for decades, hosting the old lady regularly for tea and helping her trundle out her bins each weekly Recycling Day, she’d never once been invited into this house – an exclusion that still rankles. But once the door’s been opened, the two women talk each other into collaborating, despite their mutual antipathy, to sift through the midden of memorabilia.

And what a mound it is! The play's action is periodically punctuated by helter-skelter scenes of the co-stars scurrying about the Studio 16 stage dismantling bits of the packing crate wall and announcing their outrageous finds, all to the tune of composer Mishelle Cuttler’s frantic steeplechase score.

So daunting is the task that they have to refuel themselves repeatedly with swigs from the tequila pint that Phyl packed in her Greyhound carry-on, over which they slowly begin to bond. They’re bonding, at the same time, with the Dear Departed, whom they each address in soliloquies, droll or soulful, that lighting designer Sophie Tang carefully offsets with a yellowish gel.

Piecemeal, some of the Dead Woman’s Things – years’ worth of hand-addressed but unmailed greeting cards, an album of mutilated photos with the scissored excisions carefully saved in another envelope, a forgotten baby-doll – come to mean more than mere mystery clues. Aunt Whodunnit becomes less of a riddle and more of a presence, still shadowy but sympathetic, the Citizen Kane of Coquitlam.

She’d be amused at this, evidently, for (as Bea reminisces) “she did love to laugh although she couldn’t tell a joke to save herself.” Ironically, her suicide tells out as an elaborate joke to save others: her niece and her neighbour, who learn to cherish each other, attaining new levels of self-understanding and hope by the end of their 90-minute pas de deux.

The two co-stars present layered characterizations that allow them to blossom before our eyes. Chenosky’s sardonic insouciance masks a shy sensitivity that allows her to morph at last into a humbly empathetic eulogist. Barrett’s encysted resentment gives way to a gently ironic solicitude. Paradoxically, in her soliloquies, she comes off as the younger of the two, speaking straight into the audience with a wide-eyed, rueful, almost childish wonder at the surprises turned up in her old and new neighbours.

You wouldn’t look for high drama in such a sentimental story line, nor would you expect a suicide play to come off as a witty laff riot. Yet Deveau achieves these oxymoronic feats through his wonderfully honed writing. He’s had long enough, after all, to fine-tune the script; it’s been seven years in the making, perhaps partly because the subject’s so near the bone.

Dead People’s Things is not exactly autobiographic, to be sure, but “a show that tiptoes along the delicate line between fact and fiction,” as he puts it in his program notes. Director Cameron MacKenzie, his domestic and professional partner, spells it out more explicitly: the couple live and work in a house bequeathed by Deveau’s aunt, which allows them to “dedicate our lives to practicing art.”

That practice has given rise to Vancouver’s Zee Zee Theatre which, over the past 11 years has staged a round of mostly LGBTQ-themed productions such as the upcoming Tucked & Plucked: Vancouver’s First Nations Drag Herstory Live Onstage. By these lights, Phyl and Bea are hardly typical Zee Zee protagonists.

They’re white and straight (or at least sad, unwitting femcels, not conspicuously “queer.”) Neither are they homeless; if anything, they’re burdensomely over-housed. And how can any Lower Mainland homeowner be classed among the Poorest of the Poor?

Yet the two women fit right into Zee Zee’s avowed mission of “amplifying voices on the margins.” In their existential loneliness, they’ve each sidelined themselves to the margins of their own self-awareness. And, by learning to see each other and Aunt Whodunnit, they point us all a way forward.

This smart, funny, touching play has all the makings of a repertory staple. Take in its world premiere now through May 5 at Studio 16.