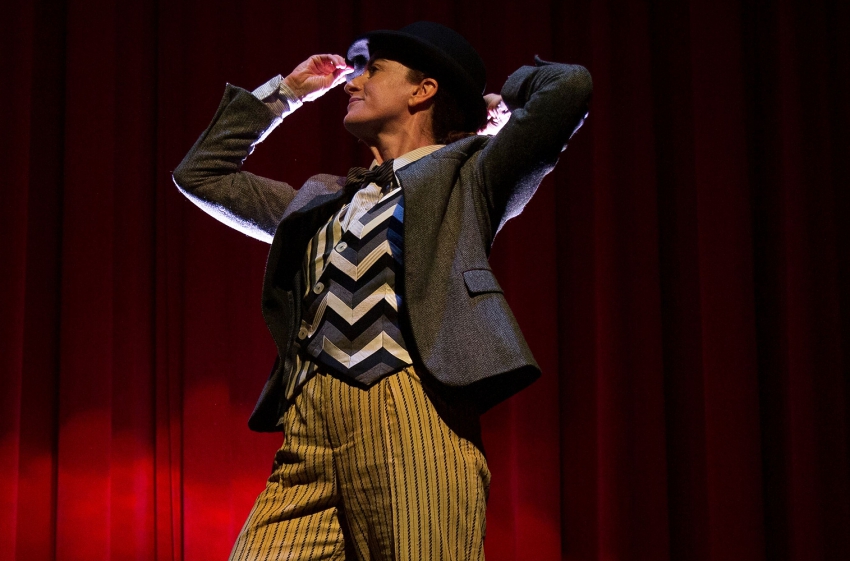 Broadway tour shows notwithstanding, you don’t need a fleet of 18-wheelers to deliver cutting edge musicals to Metro Vancouver. With its new staging of the late Vancouverite polymath Tom Cone’s repertory staple script Herringbone in New Westminster's Anvil Centre, our own homegrown Patrick Street Productions has managed to pack a 100-minute, 32-song tragifarce into just one standard-sized steamer trunk.

The box (with inset shelves, a false bottom and resonant lid) serves as the sole piece of stage furniture on designer Sophie Tsang’s set. In the course of the show’s two acts, it’s pressed into service as (among other things) a tap dance stage, a thespian costume chest, a cross-country road-trip jalopy, a sofa, a church pew, a hotel boudoir divan, a hurdy-gurdy and a suicidal leaper’s ledge.

Stringing these oddments together is a madcap Alabama-to-Hollywood vaudeville tour at the onset of the 1929 Depression; a  non-linear plot that defies summarization. About the only story elements not crammed into the trunk are the show’s 10 characters. But they probably could fit in there, too, in a pinch, since they’re all portrayed by a single, compact sparkplug of actress, Luisa Jojic who plays all the roles.

Vancouver theatre buffs will recognize Jojic as a veteran trooper with a string of starring stage roles and film credits, plus multiple Jessie nominations and 10 Bard seasons under her belt. Her roles have ranged from the farcical Lysistrata to the angst-wracked enabler/confessor of a mass murderer in Pi Theatre’s The Events. But in Herringbone she outdoes herself, solo-sprinting the whole sublime-to-ridiculous gambit and back again with dizzying speed and virtuosic versatility.

Swapping voices and body language (singing and tap-dancing more than half the time) she sweeps us along as she confutes, cajoles or berates herself in brisk dialogue. She becomes, by turns, a little, lost eight-year-old child star, pinioned between his smothering mother, his wheezingly venal father, his tartly sanctimonious grandma, a smarmy acting coach, a vengeful vaudevillian ghost, a prim lawyer, a randy desk clerk, a flustered haberdasher, etc.—all Jojic, Jojic and more Jojic.

On alternate days of the show’s two-week run, through October 6, all these roles will be embodied in the person of Patrick Street’s co-founder, Peter Jorgensen – himself a seasoned veteran director, performer and musical theatre devotee. But opening night was all Jojic and, in a show so defined by its sole performer, I can only comment on the version I saw.

And that version was a knock-out. Jojic and director Kayla Dunbar command such cachet in Metro Van theatre circles that it seemed nearly half the opening night audience (many arrayed in cabaret-style table seating down in front) were recognisably high-profile performing arts pro’s in their own right – actors, dancers, writers, musicians. Jojic also commanded such respect from playwright Cone (himself a sort of patron saint of Vancouver and Canadian theatre) that he personally autographed her copy of the script “To Luisa, I can’t wait to see you do Herringbone.”

Sadly, he didn’t live to see Jojic perform his most popular script, joining the panoply of top stars (including David Rounds, Joel Grey, Morris Panych and B.D. Wong) who’ve had a crack at Herringbone. The playwright died of cancer in 2012 at the age of 65. He first started working on the play when he was 28, but it really took off only after he recruited composer Skip Kennon and lyricist Ellen Fitzhugh to elaborate it into a two-act musical.

The music (performed here by the onstage trio of pianist Sean Bayntun, bassist John Bews and percussionist Alicia Murray) is the constantly spooling thread that holds the whole ramshackle story together. The score is tuneful and eminently danceable, whether as claquette or waltz of tango, with Jojic suavely partnering herself more often than not. And the witty libretto is intelligibly enunciated throughout – rare for a musical these days.

And yet for all the non-stop music and dance, the show divides crisply into vignette scenes. Much of the credit goes to Jojic, with her protean on-the-fly changes of voice and comportment. But designer Sophie Tang’s staging also sets the pace with her clever lighting – quick, stark colour changes, tracking spots and noirish shadows.

Nobody is listed in the program as choreographer, a conspicuous absence in a show so reliant on dance. One can only read this omission as a testimonial to the ingenuity and versatility of the performer and director as well as the idiosyncrasy of each player’s distinctive interpretation.

I’d love to see how differently Jorgensen goes about it. But, whichever performer gets up on the steamer trunk, Patrick Street’s Herringbone is well worth a trek out to New West.

Joel de la Fuente animates Sakata paean to a pacifist, anti-racist Happy Warrior
Lincoln KayeOct 26th, 2019
Speak up about this article on Facebook or Twitter. Do this by liking Vancouver Observer on Facebook or following us @Vanobserver on Twitter. We'd love to hear from you.