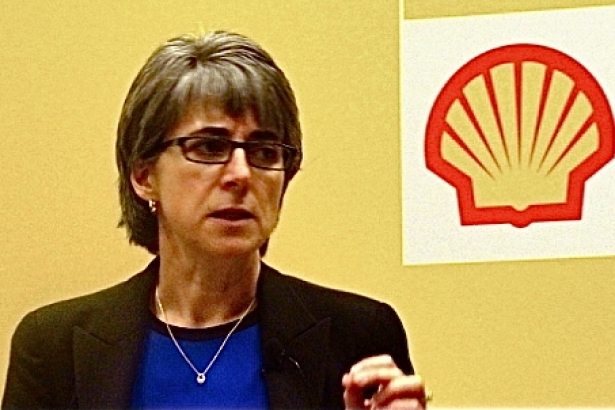 No sooner had she finished her 10-minute speech at the Vancouver Convention Centre this morning, the questions came firing at her. Shell Canada President Lorraine Mitchelmore remained composed.

"Collaborate with who?" Business in Vancouver's Sean Kolenko asked, picking up on the Shell president's numerous references to Shell Canada's "collaboration" on energy projects.

"When we think about collaboration, we think about collaboration in broader terms," Mitchelmore replied. She spoke about government, environmental groups, First Nations and others who shared a "common purpose" -- a term she would use several times during the press conference organized by Shell Canada to discuss Canadians attitudes towards the environment and sustainability.

"Obviously, BC's five conditions have been really tough for oil projects such as Northern Gateway," said a Sun News Network reporter, asking what would be the only industry-friendly question of the day.

"Are you happy with the way that Christy Clark has been handling the relationship between getting Alberta crude to Canada's west coast?"

Mitchelmore, who worked formerly as a geophysicist with Petro-Canada, Chevron and BHP Petroleum, said energy was "Canada's advantage".

"Is it actually possible to build a pipeline that is very unlikely to have a leak, and have it be profitable for oil companies?" cut in another journalist.

"It seems even in flat terrain without adverse weather, there are many pipeline leaks every year."

Pausing to reflect, Mitchelmore said that she wouldn't say it was impossible.

When a Vancouver Observer reporter asked her about what Shell was doing to make their projects in the oil sands more environmentally sound, Mitchelmore smiled warmly.

"Shell is passionate about the environment," she said.

"Just in the last two years, we formed this unprecedented group called COSIA (Canadian Oil Sands Innovation Alliance) and we took all of our technology and we shared them. This is a very competitive industry, that would never have done this in the past," she said.

Shell is collaborating with Canada's government on a carbon capture and sequestration project that could reduce emissions by about 33 per cent,  she added, though exact dates for this implementation were not given upon request. Shell's website says  the project would begin in 2015.

Asked about Shell's liability and insurance for to oil spills, Mitchelmore avoided the question entirely and talked broadly about Canada and Shell's "common purpose" and making Canada a "world leader".

"Wouldn't it make more economic and environmental sense to refine heavy bitumen in Canada? Wouldn't that be better for jobs and spill clean-up?" a reporter asked.

Mitchelmore acknowledged that this was an option, though "not necessarily the best one". 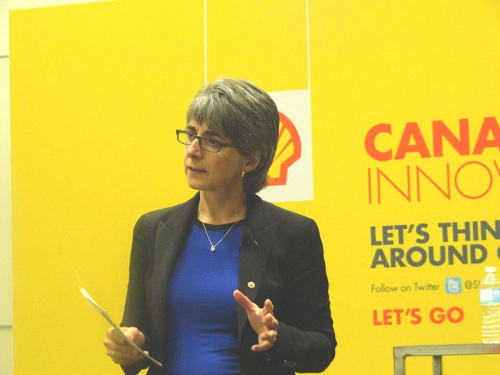 Mitchelmore said it was important to "take a step back" and consider that within four decades, the world would have another two billion people who would need energy. She said energy is needed to lift billions of people out of poverty, hinting that this energy wouldn't be coming from solar panels for the time being.

When West pressed her to provide a dollar figure on what Shell was investing in alternative energies, she said that Shell was investing in natural gas as well as biofuels, but wouldn't divulge a dollar figure. "Fossil fuels, in any scenario, will be there for a period of time, but wind and solar will take over at the end of the century. But it will take time," she emphasized. "So that's why we are investing in reducing our CO2 emissions through carbon capturing, through energy-efficient equipment, and of course in LNG."

As for how Shell can square LNG exports with the environmental impact of LNG extraction (which has been criticized for releasing methane gas into the atmosphere), she said Shell needs to remain competitive in the LNG industry, and said that the company will have to balance the demands of investors and the needs of the British Columbia public.

Mitchelmore's apparent cautiousness underscored the company's tenuous position in parts of Canada such as:

Most recently, Shell has announced that it will undertake offshore drilling in Nova Scotia, which critics say requires an independent safety agency to monitor the project.

While the Shell exhibition in the next room celebrated the company's deep commitment to environmental solutions, the president seemed to be deliberately non-committal during her Vancouver stop about how these projects would reduce fossil fuel dependence in the years to come.
Read More:
Share on Facebook Share on Twitter

Premier Clark at LNG conference: BC will not be undersold